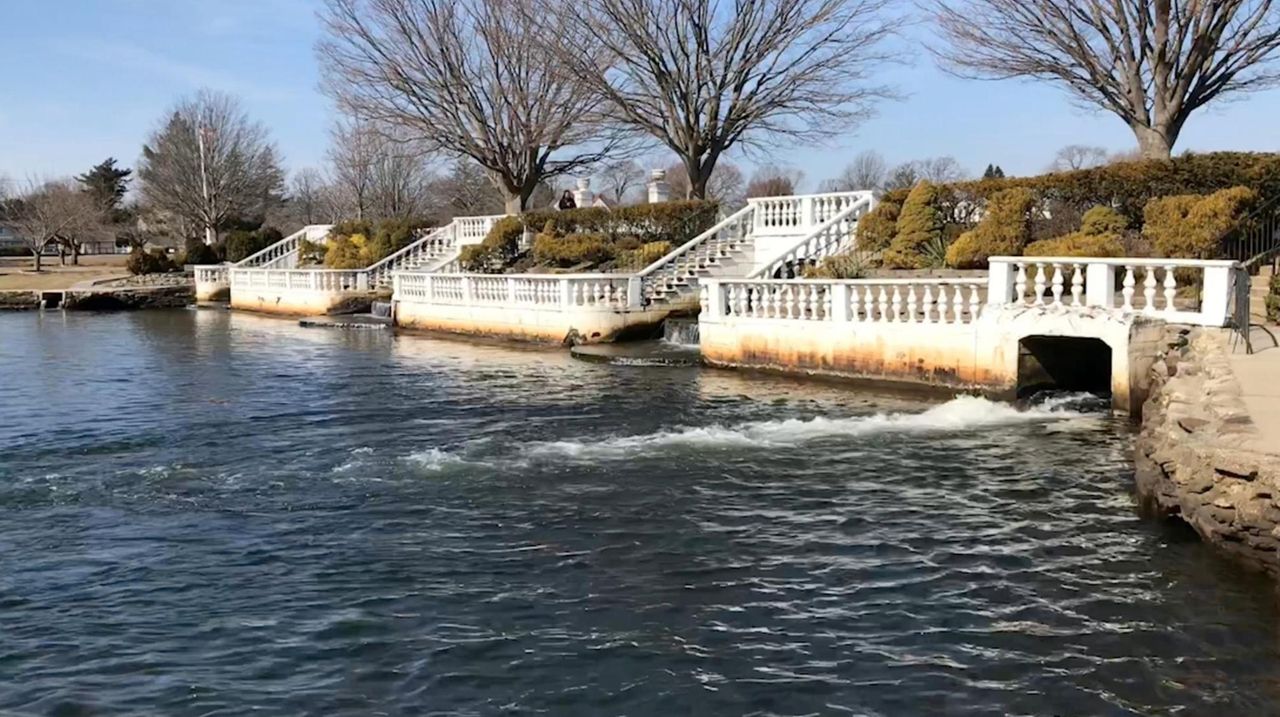 The weatherworn landmark Argyle Falls in Babylon will get a makeover soon.

The man-made waterfalls were built  in 1929   and 1930, village Public Works Superintendent Charles “Skip” Gardner said, and its white paint is discolored in many places, cracked, chipped and peeling.

The village plans to scrape off the paint, fill in cracks, repaint it and replace parts of the railing.

In warm weather, falls-gazers sit on park benches and listen to the splashing water while children play on a nearby playground, and dog-walkers and joggers take laps on the track that circles the adjacent Argyle Lake.

Mayor Ralph Scordino said all the work will be cosmetic and the structure itself is sound.

“The falls are kind of ornamental, they’re not the actual working part of the lake,” Gardner said.

The project is expected to take about a month. To do the work, the village must turn off the falls and use a control gate on the east side of it to lower the height of the water flowing from the lake, Gardner said.

They have one permit from the state Department of Environmental Conservation and are waiting for another before they can begin work.

Scordino is working with community organizations to fundraise for the project and is hoping it’s eligible for a grant.

Village officials also have been trying to embark on a larger project to repair the eroded shoreline of the lake by removing existing aluminum along it and replacing it with gabion baskets — stones inside mesh cages — covered with topsoil and vegetation.

Other portions of the lake's shoreline will get boulders and woven coconut husks known as coir logs.

That project has been delayed as the village tries to secure funding and get permission from the U.S. Army Corps of Engineers to begin work.

The village received a state grant for $365,000 but must come up with the rest of the money for the estimated $700,000 project, Scordino and Gardner said.

On the first day of spring, Christopher Pabisch, 29, of Dix Hills, and Alessandra Martino, 39, of Deer Park, were sitting on a park bench, enjoying watching the falls.

“It’s nice to come down and, you know, hear the water and see all the people walking around, birds going, boats,” Pabisch said. “Just a time to get some peace and quiet.”

Martino recalled that her sister took her wedding photos at the falls 27 years ago and noted the dark discoloration of what used to be stark white falls and railing.

Charles Crandall, 58, of West Babylon, was playing his ukulele while sitting near the falls.

“It’s a beautiful park," he said. "It definitely needs some upkeep."

History of the falls

-Before, there was a wooden sluiceway. It’s construction year is unknown, but it was present in 1893. It was demolished to build the falls.

-The falls have had minor maintenance over the years but never a complete cosmetic overhaul.

-The project is estimated to take at least one month.

-The different spillways will be turned on and off throughout the project depending on whether repairs are being done on them.

Village to restore shoreline of lakeBabylon Village has won a $365,083 state grant for its efforts to restore the deteriorating ...