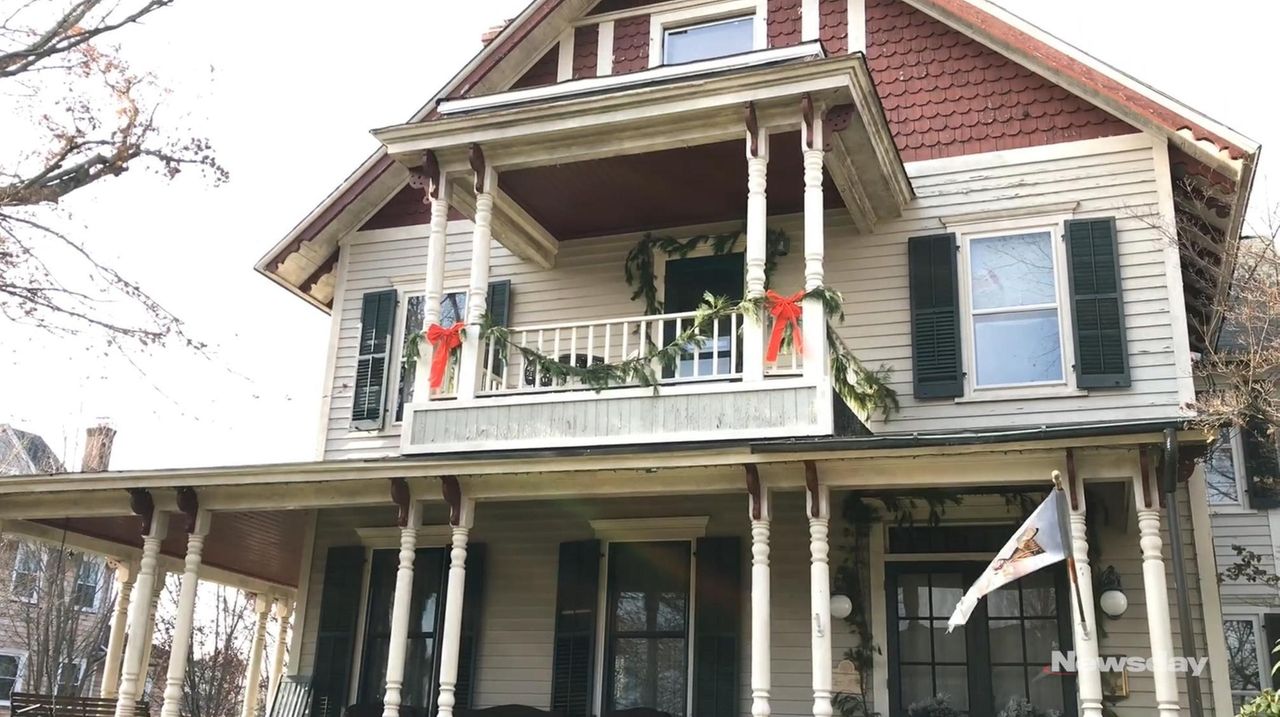 Gilda Gricka, at her 1882 Victorian house on Fire Island Avenue in Babylon, speaks on Dec. 6 about the importance of educating residents on the background of the community's older buildings so that the structures can be preserved. Credit: Newsday / Rachel O'Brien

A committee of Babylon Village residents has been formed to try a new tack in encouraging the preservation of historical buildings after village officials said they won’t support preservation through statute.

At least 36 potentially historic houses have been demolished since 1980, according to Babylon Town historian Mary Cascone.

Marsden and others are contacting owners of older buildings and educating them on the building's history, beginning with two dozen houses on Fire Island Avenue that records show are 100 years old or older.

Committee members look through documents in the library’s local history room, through the historical society’s records, as well as old news clips from the shuttered newspaper, the South Side Signal.

“There’s a lot of history and we want to make it available to the people,” Marsden said.

Concern over historical buildings has built over the last couple of years and in November 2017, James Muller, who owns a historical home in North Babylon, gave village officials a 2,000-signature petition, asking them to protect such buildings in the village code.

The historic house committee was formed over the summer, after village officials said they wouldn’t act on the petition.

Mayor Ralph Scordino said that while he supports voluntarily preserving historical buildings, he won’t support a law that requires building owners to do so.

In April, developer Ken Rogers demolished the Selah Smith Carll House, circa 1826, at 73 West Main St. He is seeking variances from the zoning board of appeals to construct a building with retail on the ground floor and three apartments on the second floor, according to James Slack, chairman of the village planning board.

Rogers also plans to restore and use for office space the adjacent South Side Signal Building, circa 1869, which housed the local newspaper, Slack said. Rogers didn’t return requests for comment.

Gilda Gricka, a member of the house committee, hopes that people who know more about the history of their building will be more inclined to preserve it.

She owns an 1882 three-story Victorian on Fire Island Avenue with her husband, Tom — a dream realized after 47 years. They had lived in a ranch in West Babylon until they purchased the Victorian in June 2016.

Gricka investigated her house’s history, finding it was first owned by Washington Fayette Norton, a prominent figure in Babylon in the 1800s and early 1900s. He was the first president of both the Bank of Babylon and the Babylon Library and superintendent of the water authority and had a hand in incorporating the village.

The house is close to its original form, with cosmetic updates, and the couple wants to keep it that way.

“We love the house,” Gricka said. “Our goal is to make the people aware of the history of the village and make them aware of the beautiful old homes and buildings that we still have in the village that are worth trying to preserve.”

470 – The estimated number of houses with historical significance, as tallied in a 1980 study

36 – The estimated number of historically significant houses demolished since 1980