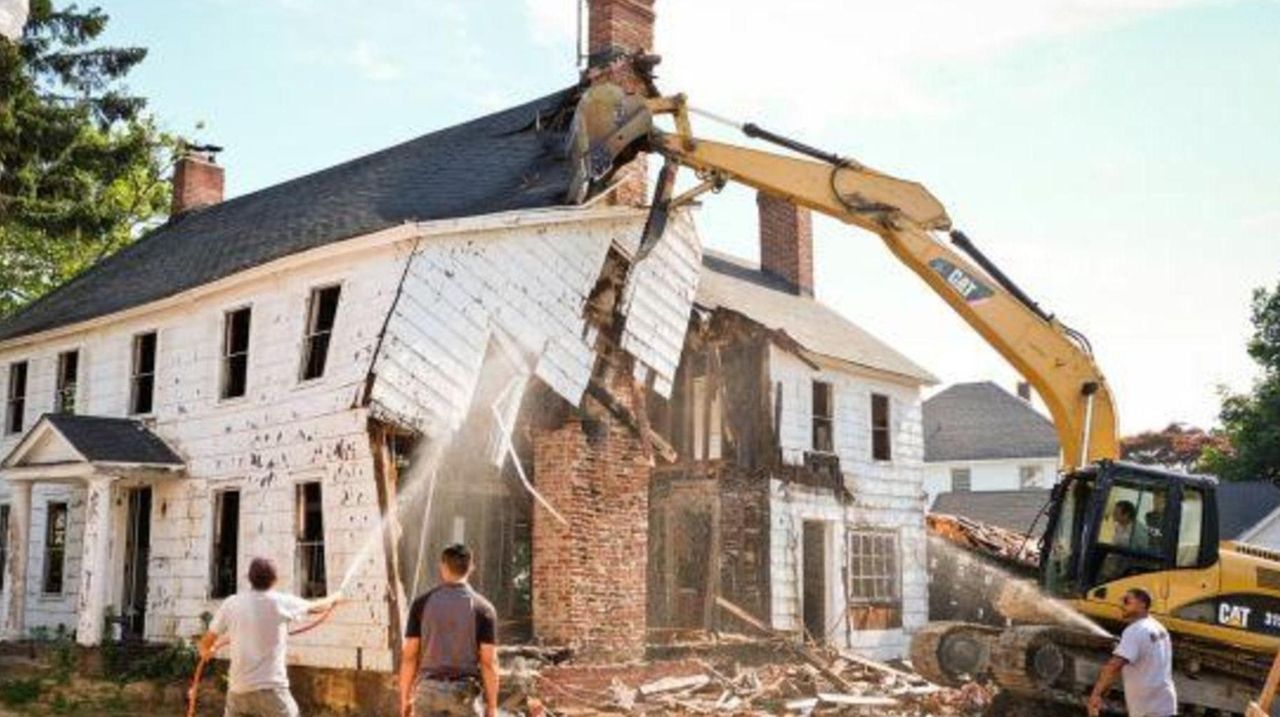 After years of effort to save it, a 1790s home built by Revolutionary War soldier David Smith was pulled apart by a bulldozer in Babylon Village on Monday, July 3, 2017. Credit: Newsday / Taylor Swaak

The home, built in the 1790s by Revolutionary War soldier David Smith, was demolished Monday morning after about five years of pushback from local preservationists such as Baker, who called the site “important to the history of the village.”

“[Smith] not only helped develop the village, he helped found America,” said Baker, a board member of the Babylon Village Heritage Conservancy. “It’s a cruel irony that his house is being demolished before the Fourth of July.”

While Babylon Village doesn’t have a historic building code to prevent such demolitions, its building department denied property owner Chase Ognibene a permit to tear down the home in May 2016. The village’s Zoning Board of Appeals then lifted the restriction in March.

“It’s the end of a five-year headache,” said the owner’s father, Steve Ognibene, who oversaw Monday’s demolition and helps handle the land’s development. “ . . . It’s my Fifth Amendment right to do what I want to do with my property as long as I conform to their laws.”

Nearby residents were given four days’ notice of Monday’s demolition, according to a dated letter posted on the property.

Two and a half hours into demolition, the farmhouse — a five-bay, 2 1/2-story gable-roofed home with cracking white paint and ivy growing up the sides — had started to tilt, its entire back end ripped open by a backhoe’s claws. After one particularly fervent push at 10:30 a.m., it crumbled like a house of cards, an orange cloud of dust billowing out from underneath.

Eleanor Burns, 80, who lives nearby, watched from across the street as the backhoe pounded at the rubble.

But it shouldn’t have been, conservancy member Jerry Miskovsky said. Local preservationists had presented Steve Ognibene with two interested buyers who would have conserved the property, he noted, but Ognibene had not expressed interest.

The property, which is less than an acre, has been subdivided into three plots for development, with one home already built and another in progress. Ognibene has said he intends to build a home in place of the farmhouse as well.

While resident and conservancy member Joseph Kolm said he would’ve liked to have seen the home saved, he felt for all sides involved.

Standing in his yard — a block from where the farmhouse had stood — Kolm pulled away a cover to reveal planks of wood he’d recovered from the home with permission on Saturday, using a sledgehammer and a crowbar.

He’s thinking of using them to make a bathroom vanity, a shelf or picture frames, he said, and plans on giving some of the wood away to others who are interested.

“I’ll always have a piece of the David Smith house now,” he said.