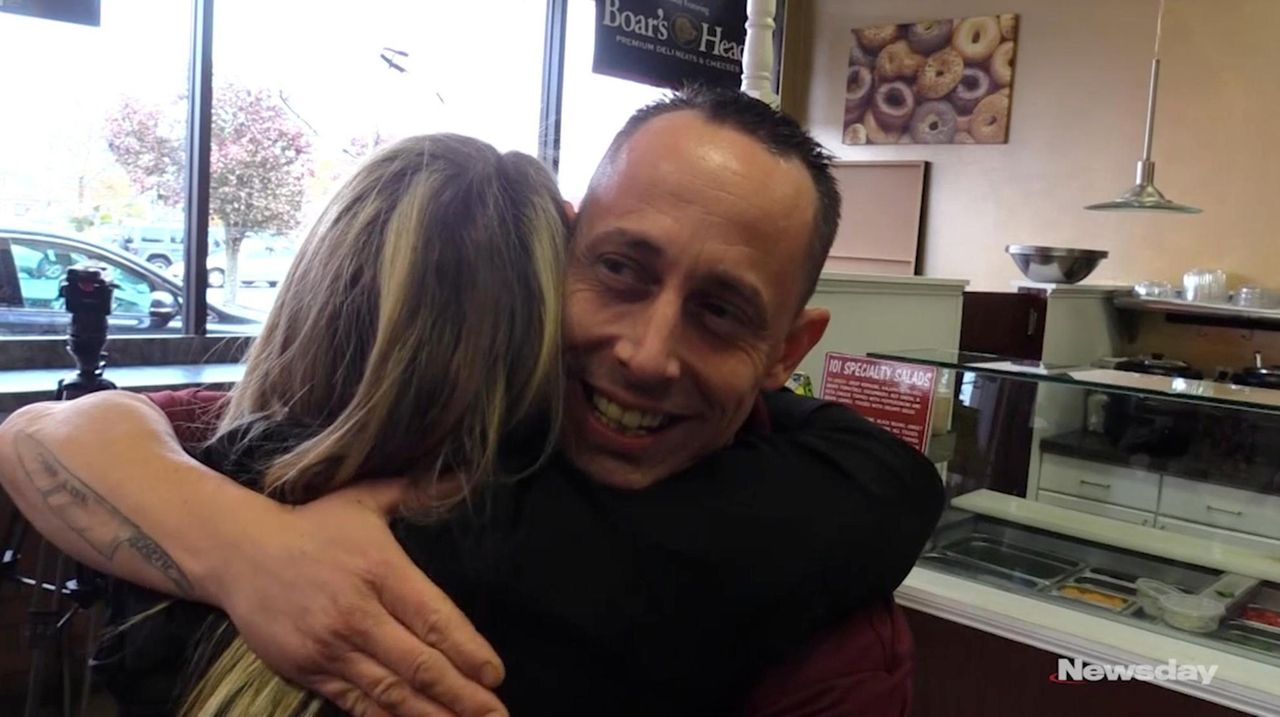 Vincent Proscia, an employee at a bagel store in Middle Island, provided the ultimate act of kindness when a customer accidentally left her cars keys on Saturday. Credit: James Carbone

Set an extra seat at "Friendsgiving" next year for the Middle Island bagel store baker with a knack for delivering holiday schmear.

Vinny Proscia, 41, of Ronkonkoma, who works at Bagels 101 on Middle Country Road, has won praise for an unusual act of kindness to a family he hardly knew.

Proscia drove nearly six hours Saturday night to northeast Pennsylvania to drop off a set of car keys that customer Diana Chong left in his shop during a bagel run that morning before she headed to a Friendsgiving celebration near Scranton.

"It was the right thing to do," Proscia said Monday as he reunited with Chong, 35, of Ridge, and her family at the bagel shop. "If it happened to my wife, I'd want somebody else to do it for her."

Her Kia Sorento has an automatic start device that allows the vehicle to continue running without keys in the ignition but is needed to restart the SUV once it's turned off.

Chong said she was taken aback by Proscia's thoughtfulness.

"This is an act of kindness and that is what people should do for one another, especially around the holiday season," said Chong, who visits the bagel shop nearly every morning on her way to work as a teacher's assistant at Longwood Middle School.

The story began Saturday when Chong ran into the shop for some salty breakfast treats, leaving her husband, Frank Chong, daughters Gianna, 10, Alexis, 8, and dog, Kylie, inside their running Sorento.

Chong left her keys near the front counter before returning to her SUV to begin the family's 185 mile trek to Honesdale, Pennsylvania, where they were meeting childhood friends for a pre-Thanksgiving celebration.

Luckily, the Chongs never shut the engine off during the long drive, saving them from potentially being stranded at a highway rest stop. But panic set in when they arrived in Honesdale and searched for the keys.

"I didn't know what to do," said Frank Chong.

Diana Chong reached Proscia, who offered to ship the keys to her overnight. But Chong could not find a delivery service open on Sunday or capable of getting them to her before Monday.

"I didn't know what I was going to do," Chong recalled. "We all had work Monday morning."

That's when Proscia, who had been working since 5 a.m., stepped up, telling his wife, Renee, that he was taking a road trip to Pennsylvania.

Renee Proscia was skeptical and wondered if her husband was really planning a night out at the Foxwoods casino in Connecticut.

"Of course I didn't believe him," she said. "I mean, who would do that? But this is Vinny. He would help anybody."

Proscia hit the road at about 4:30 p.m. Saturday and arrived in Honesdale at 10:30 p.m. because of heavy traffic.

When Proscia got there, Diana Chong said, he received a hero's reception.

"We welcomed him like he was forever part of our family," she said. "He really saved us."

Proscia sat down for a slice of crumb cake, took some coffee to go and turned around and headed back to Long Island, hoping to get some sleep before his 5 a.m. Sunday shift. Chong also insisted he take $200 cash for gas and tolls and a $50 Cheesecake Factory gift card.

But Proscia's adventure was not over.

On the way home, he was pulled over for speeding. Proscia tried explaining the far-fetched story to the incredulous officer who appeared unconvinced. That is, until Proscia pulled out a thank-you card written by Chong. The officer scrapped the $500 ticket and Proscia arrived home before 3 a.m., grabbing an hour of shut-eye before heading to work.

Proscia said he's been overwhelmed with the reaction but insists it was no trouble.

"It was a fun trip," he said of the experience. "I enjoyed it. I would do it again."

Chong, meanwhile, said there will forever be a seat at her holiday table for Proscia and his family.

"We had a great Friendsgiving because of him," Chong said. "It's an act of kindness that needs to be spread."