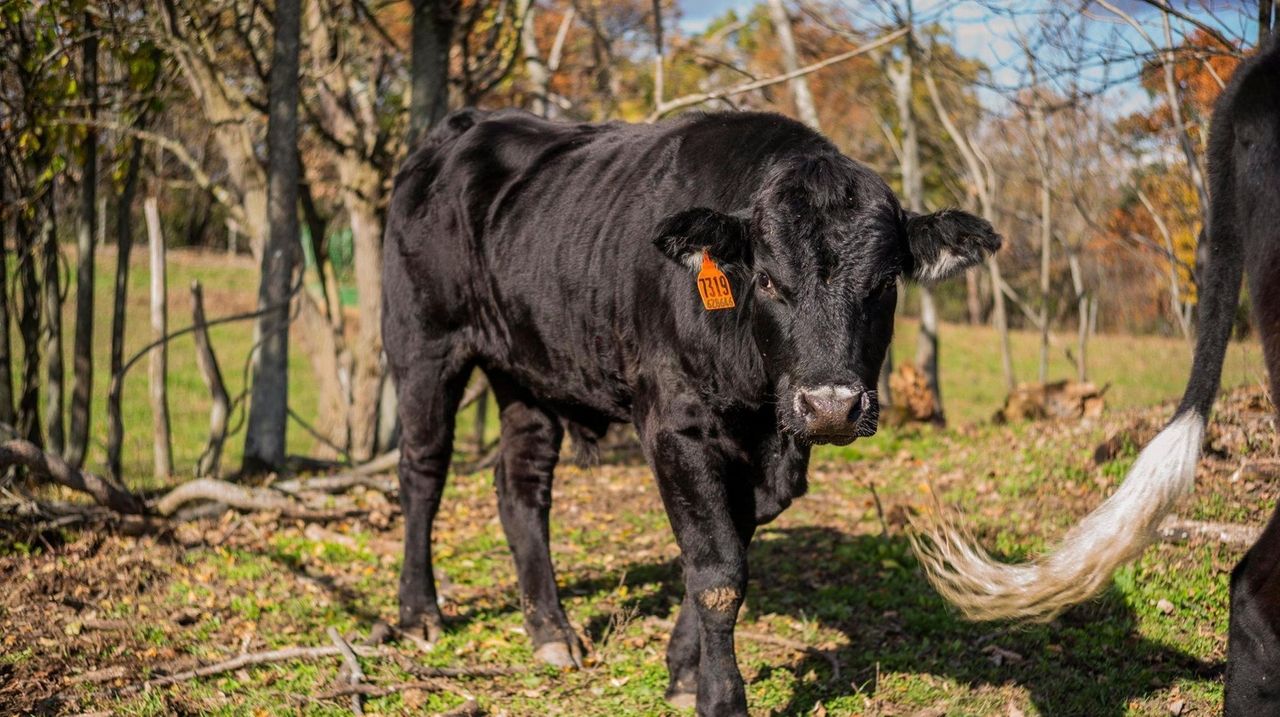 The famous animal made headlines this past summer, when it spent two months on the run on Long Island. Newsday's Steve Langford's reports from New Jersey. Credit: Newsday / Reece Williams

WANTAGE, NEW JERSEY — Barney the Bull has moo-ved to his new home, with a new crew and a new name.

Now known as Hannibal and living at Skylands Animal Sanctuary & Rescue here in northwest New Jersey, the runaway bovine — who fled imminent slaughter July 20 in the Mastic-Moriches area before being captured two months later — technically isn’t even really a bull.

Turns out he’s a steer who came to Long Island from Texas and now lives among nearly 500 animals at Skylands. The sanctuary is home to 181 roosters taken in after falling off a truck en route to slaughter, as well as some 93 bovines, plus goats, ducks, geese, chickens, turkeys and donkeys.

How about approaching him? Don’t even think about it. He’s still a little skittish from his near-death experience on Long Island.

"Right now, you see how he’s watching? He hasn’t taken his eyes off of us," said Mike Stura, Skyland’s founder, as he coached visitors on a trip to see one of his newest residents. "And if you approached him in any threatening manner, it would go ugly fast. He is alert, and he’s paying attention."

The quest to catch the bovine, who became known as Barney the Bull, was done on foot and on horseback, and with drones, helicopters, and thermal cameras. Searchers even sent out a cow in heat and set up a pen loaded with grain in the days after his escape.

"He knew something bad was happening," Stura said.

Only after Stura, a longtime truck driver, set up a temporary feeder on a Moriches duck farm, did Barney finally end his months on the run — about 1,000 feet from where he first escaped, Stura estimated.

The mission of Skylands, whose slogan is "Where Cows Live," includes rescuing animals from slaughterhouses and live markets.

"No matter where they are from or from what dire circumstances they escape, they are provided with proper veterinary care, the best foods, water, a safe place to live, eat and sleep as well as lots of love around the clock," the sanctuary's website says.

As for Hannibal's skeptical view of humans, Stura said: "Of course, he’s not fully trusting of us yet, you know? Which he shouldn’t be. I wouldn’t be either if I was him. … He’s doing way better now, though. He’s so much more mellow now."

At Skylands, Hannibal joined Freddy, another runaway bovine spared from certain death five years ago: escaping a slaughterhouse in Queens. Freddy's flight surprised drivers and pedestrians near the slaughterhouse but he was captured after just 30 minutes by the police and later turned over by the slaughterhouse to the sanctuary.

Speaking of the animals at the sanctuary, Stura said: "They all have some kind of crazy story. They all do."

Late Thursday morning, Hannibal was waiting for a big bale of hay and grain. He ran over to feed once the food dropped; on average, he’ll eat about 45 or 50 pounds a day.

Hannibal had been by himself but jumped over a fence to hang out with his new, coed crew — fellow bovines Peanut and Molly and Moxie.

"You could see: He’s very, like, agile, you know? He’s at that age where he’s kind of invincible. And he’s just 1,500 pounds of muscle," said Stura, who estimates that Hannibal is 2 ½ or 3 years old and is expected to gain at least 500 more pounds.

Stura, a vegan, said that Hannibal is a night owl and stays awake later than most others — sometimes moseying about around 4 a.m. Sometimes, because he is a younger steer, he’ll go for a run "just for the heck of it."

And Thursday morning, one of the other steers nudged aside Hannibal, who has apparently been dehorned, while the group fed at the sanctuary where Stura said Hannibal will live the rest of his life.

"Be nice!" Stura scolded the offending steer. "It’s like a grumpy old man. He pushes him around a little bit."

Hannibal, whom Stura expects to live into his 20s, was taking his cues from the others in his crew in approaching visitors.

"See the way they are? They give him the OK to come up to us. You know, without them, he wouldn’t be coming near us yet. You could give him all the grain he wanted. He’d eat it when we leave … but the reason he comes up to us now was because they let him. They’ve shown him we’re safe," Stura said.

During the feeding time, all around were mooing cows.

How’d Stura pick "Hannibal," as a new name for the former Barney the Bull (who is actually a steer, having found to be castrated months ago)?

"He just didn’t look like a ‘Barney’ or a ‘Bully Joel’ or a — what else did they call him? — ‘Houdini,’ which they call all the ones that run away, they want to call ‘Houdini.’"