On a summer night in 1950, the crowd filling the stands at an exhibition baseball game in Riverhead were likely unaware they were in the presence of not one but two future Hall of Famers.

On the mound was Satchel Paige, the famed Negro Leagues star who had made his belated major league debut two years earlier with the Cleveland Indians. Tending to bats and balls was 10-year-old Carl Yastrzemski Jr., who watched his semipro player dad Carl Sr. go down on strikes.

Now, after details of the long-forgotten contest were uncovered by a Suffolk County Community College professor and librarian, the Suffolk County Sports Hall of Fame is in discussion with Town of Riverhead officials, as well as the Riverhead Central School District, to place a historic marker on the grounds of Riverhead Middle School on Harrison Avenue. There, at the old Wivchar Riverhead Stadium, a crowd of 6,155 watched Paige pitch in a 10-5 win against the Riverhead Falcons on July 21, 1950.

'Titans of the game, legends who had an impact on sports, did this literally in our own backyard.'

"It's always about connecting the past with the future," Suffolk Sports Hall of Fame executive director Chris R. Vaccaro said of the proposed marker. "It's about the significance of Long Island on American sporting culture and that titans of the game, legends who had an impact on sports, did this literally in our own backyard."

The game is significant because Major League Baseball only became integrated when Jackie Robinson broke the color barrier with the Brooklyn Dodgers on April 15, 1947. Because Paige, believed to have been born in Mobile, Alabama, in 1906 [even Paige, who died in 1982, was uncertain of his actual birth date] spent most of his career playing in the segregated Negro Leagues before short stints with Cleveland, the St. Louis Browns and ultimately, at age 59, with the Kansas City A's in 1965. 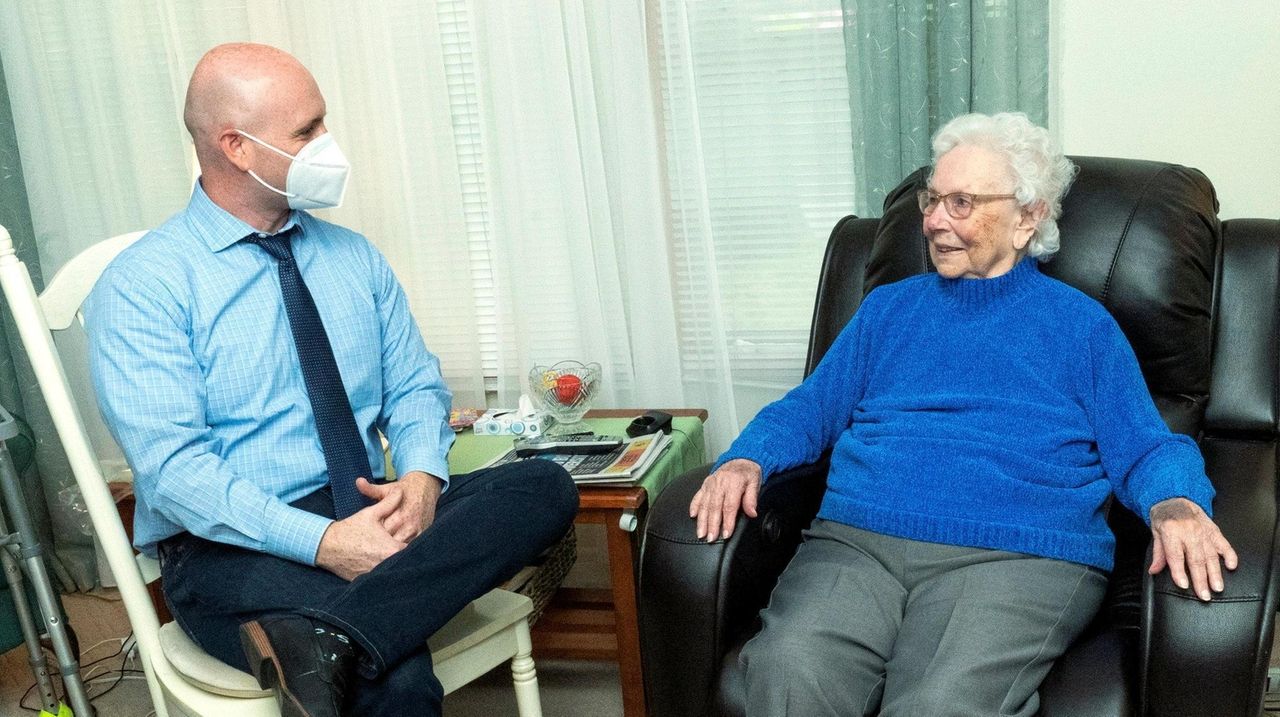 A legendary baseball encounter on East End unearthed Fabio Montella, an assistant professor at Suffolk County Community College, has worked to place a historical marker on the grounds of Riverhead Middle School on Harrison Avenue. There, at the old Wivchar Riverhead Stadium, a crowd of 6,155 watched future Hall of Famer Satchel Paige pitch on July 21, 1950. Credit: Randee Daddona

Memories of the game were revived by Fabio Montella, 42, of Holtsville, assistant professor of library services at Suffolk County Community College's Eastern Campus in Riverhead. A historian and avid sports fan, Montella stumbled across a mention while researching topics for his master's degree at Stony Brook University. Although Montella eventually wrote about female serial killers instead, he continued to research the night Satchel Paige came to Riverhead.

Montella saw an account in a 2015 story in The Kansas City Star. That article, written by Sam Mellinger, was a recollection by Carl Yastrzemski Jr. on the 50th anniversary of the last hit ever off Paige — his single off the aging pitcher in a game between the Red Sox and Kansas City A's on Sept. 25, 1965.

In the story, Yastrzemski recalled the game he saw Paige pitch against his father and the Riverhead Falcons semipro team.

A Southampton native who starred at Bridgehampton High School and who has the second-most major league games played behind Pete Rose, Yastrzemski remembered the game because Paige, then at least 44, was throwing in the mid-90 mph range — and Yastrzemski said his father, Carl Sr., walked away from the plate shaking his head after Paige struck him out.

"He had the same nice, easy motion against my dad that he had when he pitched against me [in 1965]," Yastrzemski told Mellinger. "Very easy, deliberate, then boom."

In fact, a box score showed Paige allowed just one hit in the three innings he pitched that night — a triple by Falcons leftfielder Jerry McCarthy of Baldwin.

Leroy Robert Paige was almost as famous for his sayings — of note, "Don't look back, something might be gaining on you," and "Ain't no man can avoid being born average, but there ain't no man got to be common" — as he was for his electric pitching.

Paige nicknamed his pitches Bat Dodger, Midnight Rider, Midnight Creeper, Jump Ball and Trouble Ball. He sometimes told his outfielders to go sit in the dugout — then went and struck out the side.

Because of segregation, Paige spent most of his career in the Negro Leagues, whose roots date to the 1885 Cuban Giants, a team of waiters, bellhops and porters from the old Argyle Hotel in Babylon. Among the teams Paige played for were the Birmingham Black Barons, Chicago American Giants, Baltimore Black Sox, Cleveland Cubs, Pittsburgh Crawfords, Kansas City Monarchs, New York Black Yankees and Homestead Grays.

After integration came, Paige, then at least 41 years old, joined Cleveland in 1948, earning a 6-1 record and pitching two-thirds of an inning in the World Series as the Indians beat the Boston Braves, 4 games to 2.

Paige's career in the majors seemed over after 1953. But 12 years later, he made a one-game comeback with the A's in 1965 for a day celebrating Negro Leagues veterans.

'Here's one of the biggest stars in Negro League baseball history — and he's pitched right here on Long Island.'

"The thing that really stood out," Montella said of his research, "was that here was Carl Yastrzemski getting the last hit anybody ever got off of Satchel Paige and that here he was, serving as the bat boy in a game in Riverhead where Satchel Paige pitched against his father. I thought of all the Long Island sports history and thought, 'This would be the perfect place for a historical marker.' I mean, here's one of the biggest stars in Negro League baseball history — and he's pitched right here on Long Island."

New York Yankees legend Joe DiMaggio once called Paige the best pitcher he ever faced. Hall of Fame pitcher Bob Feller said Paige was the best he ever saw.

Later, Montella also discovered Paige spoke to Cold Spring Harbor High School athletes about the importance of education at the Four Seasons Country Club in Woodbury on June 3, 1971 — a moment 50 years ago this Thursday. A story from The Long Islander quoted Paige: "I didn't get an education. I couldn't even spell, and you just can't do anything today if you can't read." The event preceded the induction of Paige into Cooperstown on Aug. 9, 1971.

Vaccaro, who also is vice president of digital news for Altice and director of graduate journalism at Hofstra University, said the marker in Riverhead is just one of many he and the Suffolk Sports Hall of Fame would like to erect in Suffolk. On his radar are the site of old Village Hall in Lindenhurst, where Yankees legends Babe Ruth and Lou Gehrig once played in an exhibition against Addie Klein's Nine before 4,000 fans on Oct. 18, 1930, not to mention the sites of old auto racing tracks like Bridgehampton Raceway, Islip Speedway and Riverhead Raceway.

As for the night Satchel Paige pitched in Riverhead, Montella has authored a research paper titled "Satchel & The Yastrzemskis: A Long Island Narrative."

"To me it's very important," Montella said, "because it covers so many different aspects of history. It's Long Island, it's sports history, it's racial history. It's the history of suburbia. All of it converges on this one moment. The history of segregation, that people were attracted to this star. The fact it happened in our backyard."

An account in the July 22, 1950, edition of Newsday read: "Since he [Paige] hurls almost every night in the week, his stay on the mound is limited. After all, ole' Satch is reputed to be approaching 50 years of age. But he still is one of the cleverest twirlers in baseball."

Legendary East End sports reporter Bob Burns noted in The Riverhead News-Review how Paige "coolly" whiffed Carl Yastrzemski Sr., writing of the "masterful" performance: "Paige, seeming to thoroughly enjoy himself, was far too fast and tricky for the locals in his stint during which he set five men down on strikes and gave up but one hit which was the only ball the Falcons even got out of [the] infield against him."

1:30
Who wants an old outhouse?
4:47
Pressure mounting for Gov. Cuomo to resign as Jacobs, allies abandon him
These restaurants, businesses, colleges and NYC theaters will be requiring COVID-19 vaccines
More people have died of COVID-19 in NY than state publicly reports, fed data shows
'Sensitive' videos on race, sex, to be restricted in Smithtown schools
1:37
'A weight and a blessing,' says daughter who takes over the reins at LI church
Didn’t find what you were looking for?