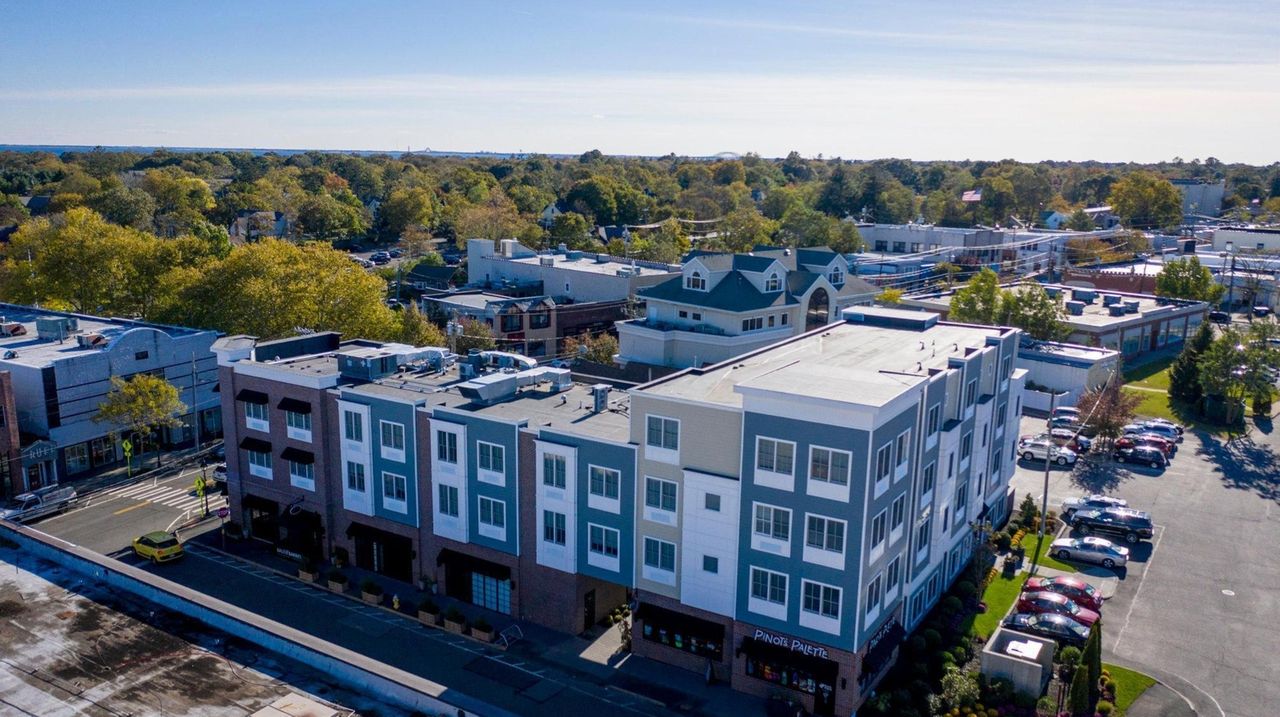 Downtown Bay Shore, once an emblem of many struggling Main Streets across Long Island, is generating momentum toward a transformation seen as a sign of wider renewal and the future of the region.

Developers envision construction of almost 600 rental apartments — nearly double the existing amount — in the 0.3-square-mile area, which is now marked by vacant lots and abandoned buildings. In the past six years, builders have planned 17 downtown apartment projects in Bay Shore, a waterfront hamlet of about 26,300 residents along the Great South Bay in Islip Town.

Four of the projects have been completed; the others have been approved by town officials and are in various stages of planning, officials said. Of the 13 proposals, 11 are mixed-use buildings, with retail or office space on the main floor and residences on upper floors. Five are about a block from the Long Island Rail Road station. The projects yet to be built range in size from eight apartments to 122.

The vision for Bay Shore

Click on each location to more information about planned development in Bay Shore, including the number of units and the status of the proposal.

“The communities with the apartments are amazing because that’s bringing a new, young effect to Bay Shore,” said Gina Jaworowski, 44, who co-owns four businesses in the hamlet. She opened a downtown cafe 19 years ago, and said she was going to sell her business but “the anticipation and excitement” of the changes made her want to stay.

The changes also raise concerns that rising rents and gentrification could push residents out of the area. School officials are monitoring whether an influx of renters could lead to overcrowding. And Bay Shore residents and workers say traffic and parking could become an even bigger headache.

The apartments are part of the 13,000 new downtown rental units that have been approved on the Island in the past 12 years, according to Vision Long Island, a nonprofit planning organization.

Peter Elkowitz, president of the Long Island Housing Partnership, said he expects the new Bay Shore apartments to fill up fast given the “critical” need to diversify housing types on Long Island, which is known for its single-family homes and sprawling subdivisions. Only about 20 percent of the Island’s housing stock is rental apartments, compared with the national average of 37 percent, he said, adding that an estimated 189,000 new rental units would be needed to fill the gap.

Officials across Long Island for years have lamented the loss of young residents. Rental-focused development could bring them back, they said.

Bay Shore in the 1990s was a struggling downtown with a 40 percent storefront vacancy rate and few central residential options. Businesses had declined after the opening of a mall, now named Westfield South Shore, about a mile from downtown in 1962, and residents lost jobs with the closing of Pilgrim State Psychiatric Center in Brentwood, now the site for a proposed large development called Heartland Town Square.

Officials decades ago complained existing apartments above downtown businesses were substandard and took away commercial opportunities, prompting the town board to approve a 1992 ordinance phasing them out.

The building boom is focused on residential development but has had an effect on business as well.

Jaworowski said that when she opened her cafe in 1999, the downtown was sleepy and "seedy" and rent was low enough that she could afford it on her waitress salary. Now people line up to go to bars and restaurants.

“I felt like Bay Shore was the up-and-coming trend,” said Jaworowski, who turned the cafe she owns with her husband into a farm-to-table restaurant in March.

Residents and investors said they are drawn by the hamlet’s general appeal: a walkable downtown, train station, expanding hospital, connection to a sewer system, and access to beaches and Fire Island.

Investment and restaurants are spurring more of the same, said Larry Gargano, the largest developer in Bay Shore with five completed residential projects and three planned.

“I believe both the new residential housing and resurgence of new businesses happened almost simultaneously, so we’re both feeding off each other,” said Gargano, of Greenview Properties, based in Bay Shore.

At least nine new restaurants have opened in downtown Bay Shore in the past five years, according to Islip Town planning data. They are the immediately visible part of the hamlet's change.

“What the general public sees and appreciates is the number of restaurants there,” Islip Town Planning Commissioner Ron Meyer said. “To the average person walking down the street, you’re seeing all these venues opening up, but I don’t know" whether people are aware of the multifamily developments.

Bay Shore's transformation started slowly after officials in the 1980s amended downtown development district zoning, which eases some restrictions, including on parking and density, and provides incentives for public amenities, such as open space and pedestrian-oriented retail space.

Residents, business owners, school officials and civic groups started an annual summit in the 1990s to brainstorm ways to turn downtown around. The community planned events, including a farmers market and an arts festival, to attract visitors. A business improvement district formed in 1992 to fund events, revitalization and beautification efforts with a yearly budget of about $110,000 collected from 400 properties, district president Robert Herrick said.

“No one believed Bay Shore would ever come back except us," said Donna Periconi, president of the Chamber of Commerce of Greater Bay Shore.

Several of the planned developments will replace abandoned or condemned sites, including a former adult home that was illegally rented out and a home known for drug use and prostitution, officials said, noting they do not think any of the developments will displace residents.

Rhea Morris, 22, who lives in Bay Shore, pointed to pros and cons from the developments. Prices are going up. But young people like her friends, who live in the city because they cannot find suitable rentals on Long Island, could “come back home” to Bay Shore, a place that used to be “boring," she said.

“Nine years ago, it was really quiet out here,” Morris said. “It’s nice you have a place to go and hang out.”

Renee Ortiz, executive director of Suffolk County Community College’s Center for Social Justice and Human Understanding, said that a thriving downtown “is a wonderful thing,” but she is concerned about its impact on housing for those who cannot afford luxury.

“It’s a double-edged sword because when you drive up property values, you drive up rent,” Ortiz said. “You already make a place that’s a challenge to being affordable less affordable.”

Elkowitz said the investment in new apartments will improve conditions for current renters. Landlords will rehabilitate buildings with new paint, amenities and more to stay competitive, said Elkowitz, whose nonprofit is partnering to build an affordable, LGBTQ-friendly senior housing complex in Bay Shore.

The developments will also bring more than 100 affordable housing units available through a lottery under a requirement that developers set aside 20 percent of their apartments for that purpose or contribute money to the town’s affordable housing fund.

“They’ll have access to new affordable units if they can get one, or they can stay where they are, and they’ll have better conditions,” Elkowitz said of current residents.

The push toward denser development is raising concerns about parking limitations, traffic congestion and impacts on the school district. Several of the projects were given parking easements, allowing 378 fewer spaces than would otherwise be required, according to data provided by Cochrane.

Bay Shore Schools Superintendent Joseph Bond said officials are monitoring the developments because the district’s already rising enrollment means that “a significant number of students moving into the district could have a negative impact on our buildings.”

While most of the proposed apartments are aimed at residents who typically do not have school-aged children, such as seniors, empty nesters and young professionals, “at this point, it’s impossible to tell the impact of the remaining proposed apartments because we can’t predict who will move into the completed units," Bond said.

Bay Shore residents and workers on plans for hundreds of apartments downtown:

Ken Inoue, 26, who moved into a new luxury apartment in Bay Shore last month, said he wanted to be able to walk to restaurants and meet other people around his age. He said he found few other places with downtown rentals in his search.

“It fits the bill,” said Inoue, who moved from Connecticut for a new job in sales account management in Commack.

Rhea Morris, 22, said the apartments in Bay Shore are “needed” because the lack of affordable rental options on Long Island has prompted her friends to move to New York City. Downtown is changing, becoming less “boring” but more expensive.

Juan Enriquez, 38, said the new apartments will bring "chaos," including more traffic and crowding to area schools. Enriquez, of New York City, works in Bay Shore a few times a month for his job in real estate.

"I just don’t see the benefit of it," Enriquez said.

Jackie Campbell, who has operated a gift shop on Main Street for 10 years, said she does not know why people would want to live in a downtown that is filled mainly with restaurants and doctors or lawyers offices.

“Bay Shore is having more and more stores close, and I don’t see anything to make more people come,” Campbell, 74, said. “More stores would help.”