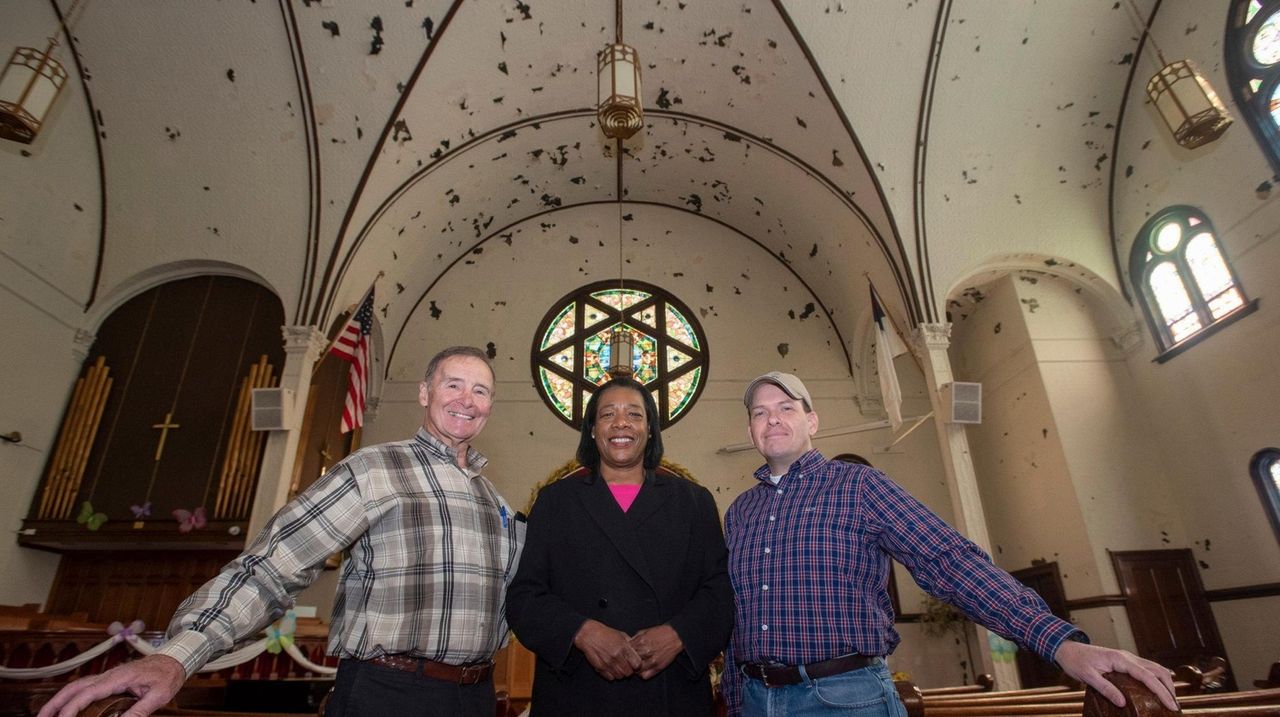 A community effort to restore the oldest house of worship in Bay Shore can be described only as a miracle, church officials said Monday. Residents have helped raise part of the $500,000 needed to rehabilitate the United Methodist Church of Bay Shore. Credit: Howard Simmons

A community effort to restore the oldest house of worship in Bay Shore can be described only as a miracle, church officials said.

Bay Shore residents — including congregants of another church — have helped raise more than $350,000 of the $500,000 needed to rehabilitate the United Methodist Church of Bay Shore, a landmark on Main Street, officials said.

The Rev. Wendy C. Modeste said church leaders did not think they could raise enough money for extensive repairs, especially with an average of only 60 attendees on Sundays. Officials completed the first phase — painting the white exterior — in November.

“A lot of the older parishioners, when they see the outside of the church they weep and say, ‘Pastor, I didn’t think I would see this in my lifetime,’ ” Modeste said.

The congregation was formed in 1810 and moved around until purchasing its current property site in 1854. It was called the Methodist Episcopal Church of Penataquit — after the original name for Bay Shore — when the first sanctuary was completed 150 years ago this May, officials said. That sanctuary is now used as a fellowship hall, and another sanctuary was built in 1893, officials said. The church is on the state's Register of Historic Places.

Paint, molding and boards had fallen off in chunks across the building in recent years, said board president David Timmoney. The building went about 25 years without a paint job, and the most recent renovation was about 15 years ago, when officials replaced the roof.

Modeste said that when she saw the building for the first time after her 2014 appointment, “I said to myself, ‘OK, we’ve got work to do.’ ”

Church officials launched a fundraising campaign in December 2017. The congregation raised about $130,000 and prayed, Modeste said.

Then officials from the Bay Shore Chamber of Commerce and St. Patrick Roman Catholic Church of Bay Shore stepped up and asked their members to help, leading to an additional influx of about $112,000, Modeste said. Another $21,000 was approved by the New York Landmarks Conservancy, and $100,000 is expected through a matching grant from the Park Avenue United Methodist Church in New York City.

St. Patrick parishioners wanted to help the Methodist church because it has had a “big impact” on Bay Shore, even with a small congregation, said Msgr. Thomas Coogan. It hosts a soup kitchen, a Head Start program and Alcoholics Anonymous meetings.

“We take pride in our downtown, and their sanctuary is one of the gems of our community,” Coogan said.

Now church officials are seeking to raise an additional $200,000 to complete interior repairs. They need to repaint the sanctuary, which is dotted by large spots where paint has flaked off. They plan to refurbish the fellowship hall, the kitchen and the basement, where about 30 community groups meet weekly.

"It was apparent for a long time that things needed to be done and we had no means to address that," said Greg Goodrich, vice president of the church board. "There's no reasonable explanation for what has occurred, besides faith and God."