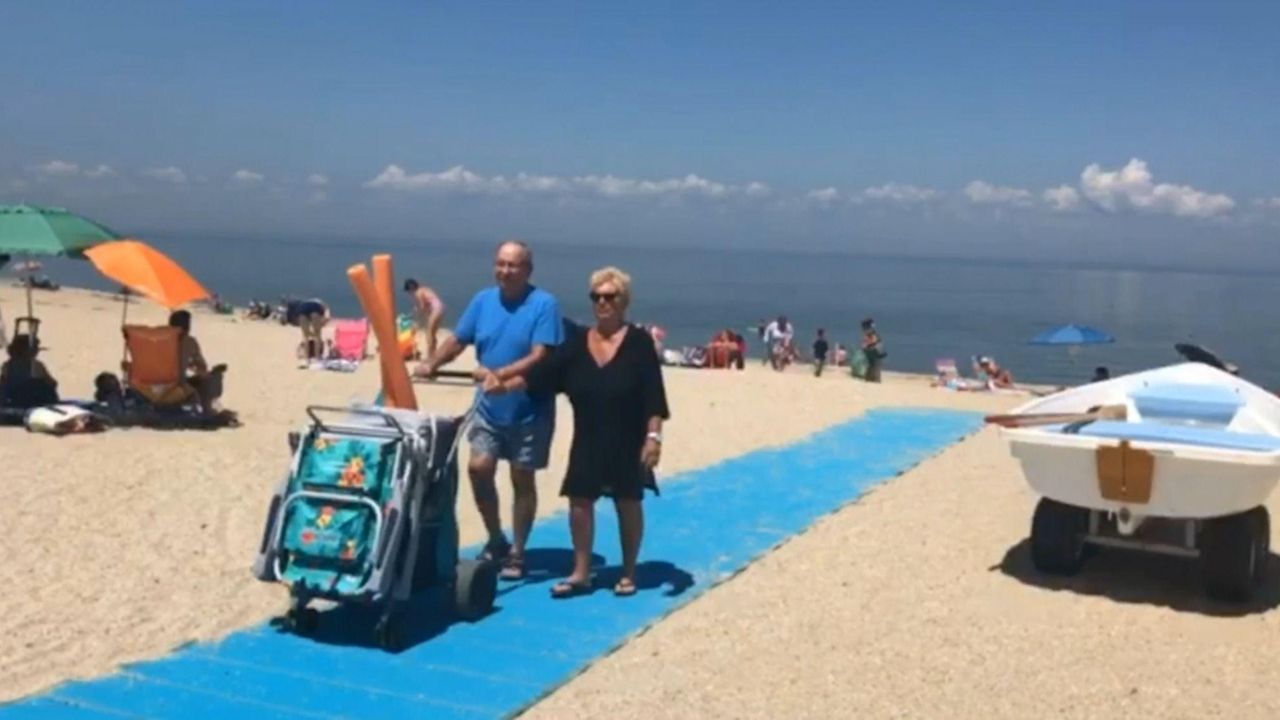 The Town of Smithtown Parks Department has installed rugged, bright blue polyester mats at two of the largest town beaches to make it easier for people with disabilities, and those lugging carts or strollers, to reach the Long Island Sound. The mats were ordered in mid-July after a resident, Ken Buxbaum, emailed Town Supervisor Patrick Vecchio about the trouble he and his wife were having getting close to the water at Short Beach.  Credit: Newsday / Nicholas Spangler

The Town of Smithtown Parks Department has installed rugged, bright blue polyester mats at two of the largest town beaches to make it easier for people with disabilities, and those lugging carts or strollers, to reach the Long Island Sound.

Town workers used payloaders to smooth and tamp down the sand before rolling out the mesh mats and fastening them down. Beach attendants sweep sand off the mats daily, and workers will remove the mats and store them before the winter, acting Parks director Joe Ianno said.

“Immediately after we put them down, by the time we cleared out, already people were walking back and forth” on them, he said.

Your guide to 110 LI beaches

Town Supervisor Patrick Vecchio said he ordered the mats in mid-July after a resident, Ken Buxbaum, emailed about the difficulty he and his wife, Evelyn Buxbaum, were having getting close to the water at Short Beach, a favorite summer destination of theirs for 40 years.

It has always been Ken Buxbaum’s job to haul the chairs, towels, blanket, umbrella and food on their weekly outings there, but Buxbaum said it has gotten harder in recent years.

“All this stuff I got to schlep,” the retired Long Island Rail Road manager, 77, said in a phone interview. This was more than just a selfish concern: He had been troubled to see a man with a cane trying to negotiate the uneven sand earlier this summer.

Buxbaum said Vecchio called him a day later. “That’s how we find out the things that need to be done, because of people from town,” Buxbaum recalled Vecchio telling him — an account that Vecchio later confirmed. “That shocked the hell out of me,” Buxbaum said. “I would have written the letter 20 years ago.”

Demand for beach access mats on Long Island could grow. Legislation sponsored by Senate Majority Leader John Flanagan (R-East Northport) and currently in committee would require beaches across the state to be handicapped-accessible all the way to the high-tide water lines, unless there is a physical barrier. Assemb. Melissa Miller (R-Atlantic Beach) has drafted similar legislation, which an aide said has been introduced but has not yet moved to committee.

How clean is your beach?

More than a dozen Long Island municipalities, New York City and all the major state beaches on Long Island already use the mats.

On busy summer days, Short Beach draws 1,300 people and Long Beach 600, but only about 100 were out at Short Beach on a recent weekday afternoon as the Buxbaums walked down to the water. “I was so happy when I saw this,” Evelyn Buxbaum, 75, a semiretired travel agent, said of the mats.

The sun was blazing. The mat was 5 feet wide, enough for two wheelchairs to pass abreast. There were no wheelchairs in sight, but virtually everyone walking up from and down to the water — families with carts, mothers with strollers, a fresh crew of lifeguards on their way to relieve the old ones — was using the mat.

Other municipalities with AccessMats on beaches