“Our mission is to eradicate this criminal organization from our county,” Bellone said during an appearance on “The Cats Roundtable” on 970AM.

Bellone also used the on-air time with host John Catsimatidis to praise the work of Police Commissioner Timothy Sini, who is looking to secure the party’s nomination for Suffolk district attorney. The Suffolk County Democratic Committee is slated to hold its annual nominating convention on Monday.

Top cop on homicide: ‘We are in the midst of a war’

“He has been leveraging those partnerships to effectively go after those gangs,” Bellone said of Sini, who recently announced his intent to run for the post being vacated by District Attorney Thomas Spota, who is retiring after 16 years in office.

Bellone’s praise of Sini, whom he appointed in 2015 to overhaul the scandal-plagued department, comes as Suffolk Democratic Party leaders mull over a roster of contenders interested in running for district attorney, including David Calone, a former county planning commission chairman.

Suffolk Democratic Party Chairman Richard Schafer has said previously there is a possibility the party will not select candidates in the district attorney’s and sheriff’s races in time for the convention because Suffolk GOP chairman John Jay LaValle has approached him about the possibility of a cross-endorsement agreement.

“There are so many moving pieces, I don’t know if we can get it done by next Monday,” Schafer told Newsday last week. 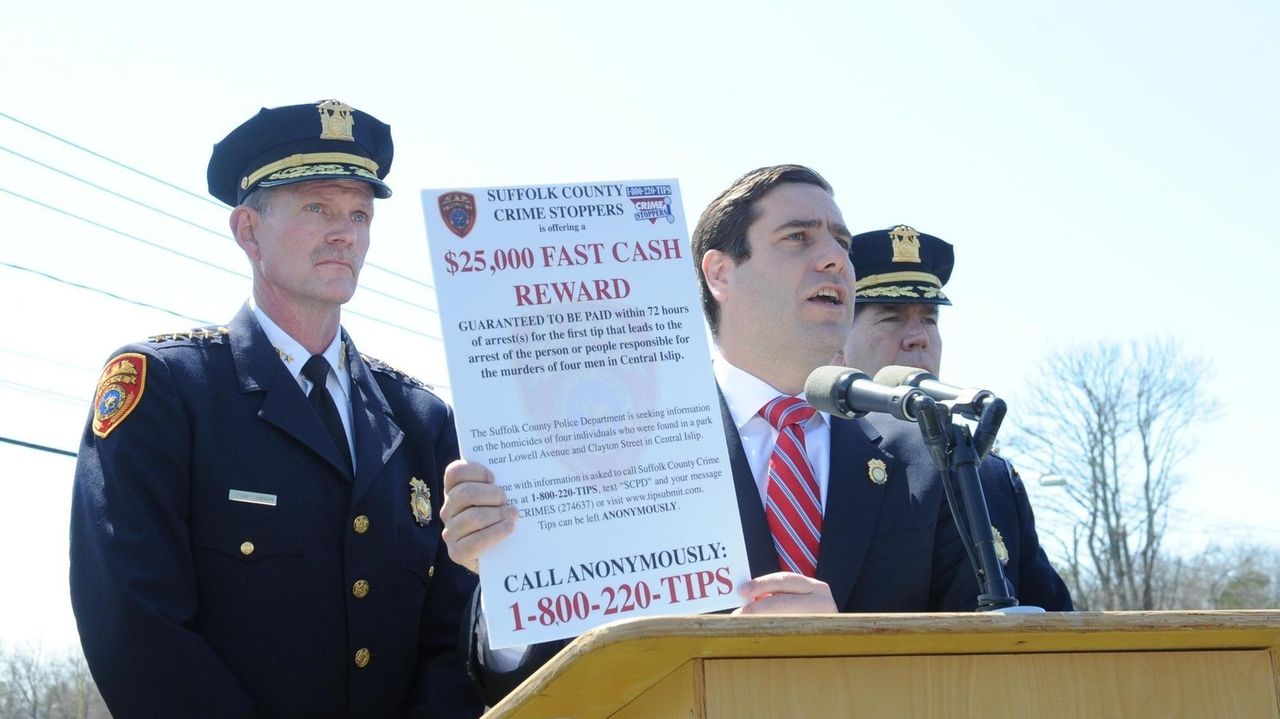 Top cop: Quadruple homicide fits MS-13 pattern On Thursday, April 13, 2017, Suffolk County Police Commissioner Timothy Sini held a news conference to talk about four bodies that were found behind a park on Clayton Street in Central Islip on Wednesday night. Sini suspects the MS-13 gang is responsible. He said the Suffolk police will be have "all hands on deck" and will be working with the FBI until the responsible parties are found. Sini offered a $25,000 "fast cash reward" for any information that leads to an arrest. Please call 800-220-TIPS; all calls will remain confidential. Credit: News 12 Long Island

Laura Figueroa covers New York City politics and government. She joined Newsday in 2012 after covering state and local politics for The Miami Herald.