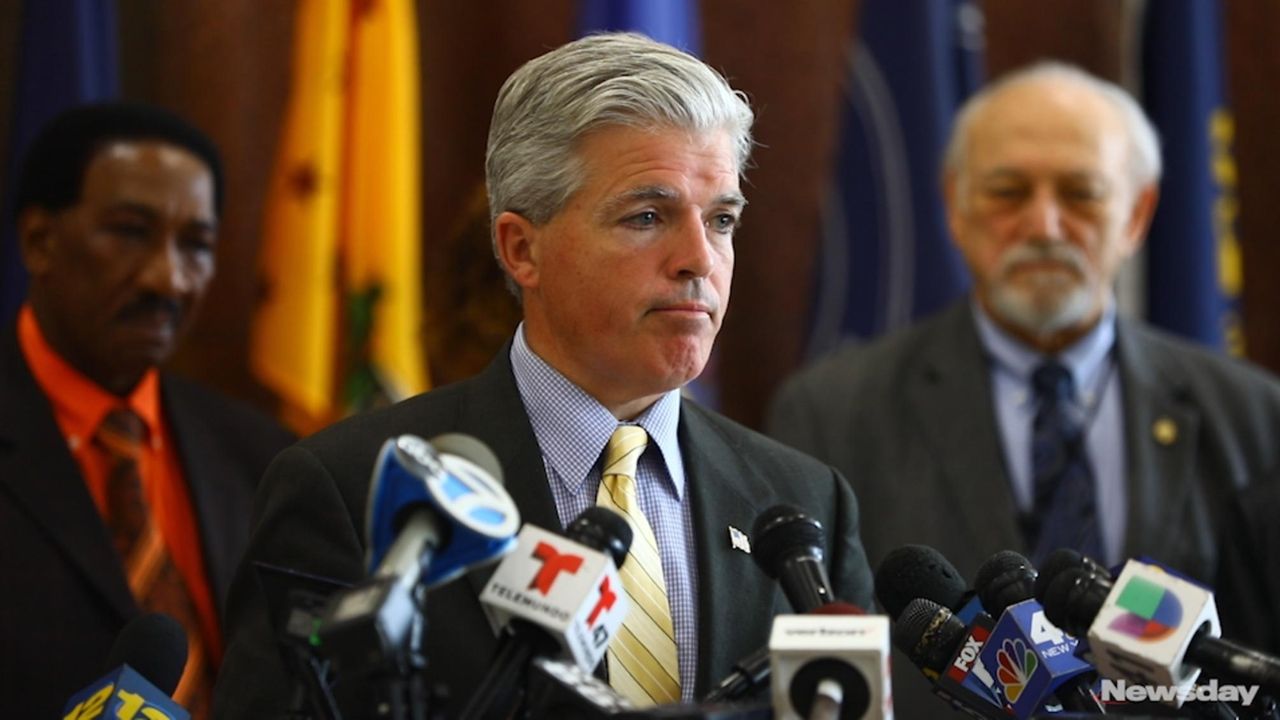 Suffolk County Executive Steve Bellone said the county will work on a "comprehensive approach" to target the MS-13 street gang that has been behind a burst of violence in some communities and to get a handle on the migration of unaccompanied minors that he says has left more teens vulnerable to the gang's actions. Speaking at a Monday, April 24, 2017, news conference at the H. Lee Dennison Building in Hauppauge, Bellone said he favors an approach that would include allocating resources for law enforcement agencies fighting gangs and seeking ways to provide community support for agencies working to help recent teen migrants. Credit: Newsday / Jefrey Basinger

Suffolk County Executive Steve Bellone called Monday for the federal government to more closely vet immigrant teens who come into the country as unaccompanied minors and notify local agencies of their arrival — measures he said are part of a “comprehensive approach” to help counter the spread and reach of a violent street gang linked to recent brutal killings in Brentwood and Central Islip.

“We’ve made it clear that our resolve is strong here and that we are determined not only to solve the murders” linked to the gang, but also “to weaken MS-13” and take away the group’s power to recruit, Bellone said. “Our goal is to eradicate this gang from Suffolk County.”

The county ranks fourth in the nation for the number of children who cross the border illegally as “unaccompanied minors,” according to the most recent statistics. The minors are then entitled to legal protections and resettlement under anti-trafficking law.

Bellone stressed that while most of the minors “are very successful in reuniting with families” and becoming part of their communities, the gang sees them as potential recruits.

Seven of 13 MS-13 members who were indicted recently after the killings of two young women and a young male gang member in Brentwood had crossed the border as minors, a Suffolk police official said.

Bellone also called for more resources for all law enforcement agencies working to fight gangs in the region as well as for preventive and educational programs that help recent teen migrants adapt to life here. “If we don’t provide the structure, MS-13 will. If we don’t do this, MS-13 will,” Bellone said.

However, Bellone did not put a dollar figure to his proposals.

He was flanked at a Hauppauge news conference by local officials, Brentwood and Central Islip school officials, and Evelyn Rodriguez and Freddy Cuevas, whose daughter Kayla Cuevas, 16, was killed last September alongside Nisa Mickens, 15, in a brutal gang attack linked to MS-13.

After that attack, three sets of remains were found in Brentwood and a man was slain on the street there — all linked to gang violence. And funerals were held last week for three of four young men whose bodies were found April 12 in a park in neighboring Central Islip — the latest string of attacks that law enforcement officials believe are the work of MS-13.

Immigrant advocates are worried about what Bellone’s plans could mean to the children, who in many cases come to the United States fleeing the very gangs Suffolk officials are vowing to dismantle.

“We are concerned about what he means by notification,” said Maryann Slutsky, executive director of Long Island Wins, an immigrant advocacy group in Syosset. “Who is notifying who? What part of the government is involved in notification? Is it legal? How exposed are the children from this notification process in terms of privacy, in terms of immigration status? . . . He talked about solutions, but sort of in a vague way.”

Unaccompanied minors have migrated to the United States in large numbers since 2014, mostly from El Salvador, Guatemala and Honduras. Most are entitled to federal anti-trafficking protections that lead to resettlement with relatives and other sponsors.

Suffolk received 841 new arrivals between Oct. 1, 2016, and Feb. 28, the last period for which figures have been published by the Office of Refugee Resettlement, part of the Administration for Children & Families. Nassau ranks 10th for resettled unaccompanied minors this fiscal year, with 608 in the same reporting period.

The federal agency did not immediately respond to a request for comment on stricter vetting, but the refugee resettlement website indicates it “requires case managers to verify a potential sponsor’s identity and relationship to a child before releasing a child” and that it conducts background checks on all prospective sponsors.

Rep. Peter King (R-Seaford), whose district includes some of the most affected areas, said he agrees with Bellone on the need for multiple measures, from restructuring the resettlement program, to asking the federal agencies for resources for law enforcement and to supporting gang prevention.