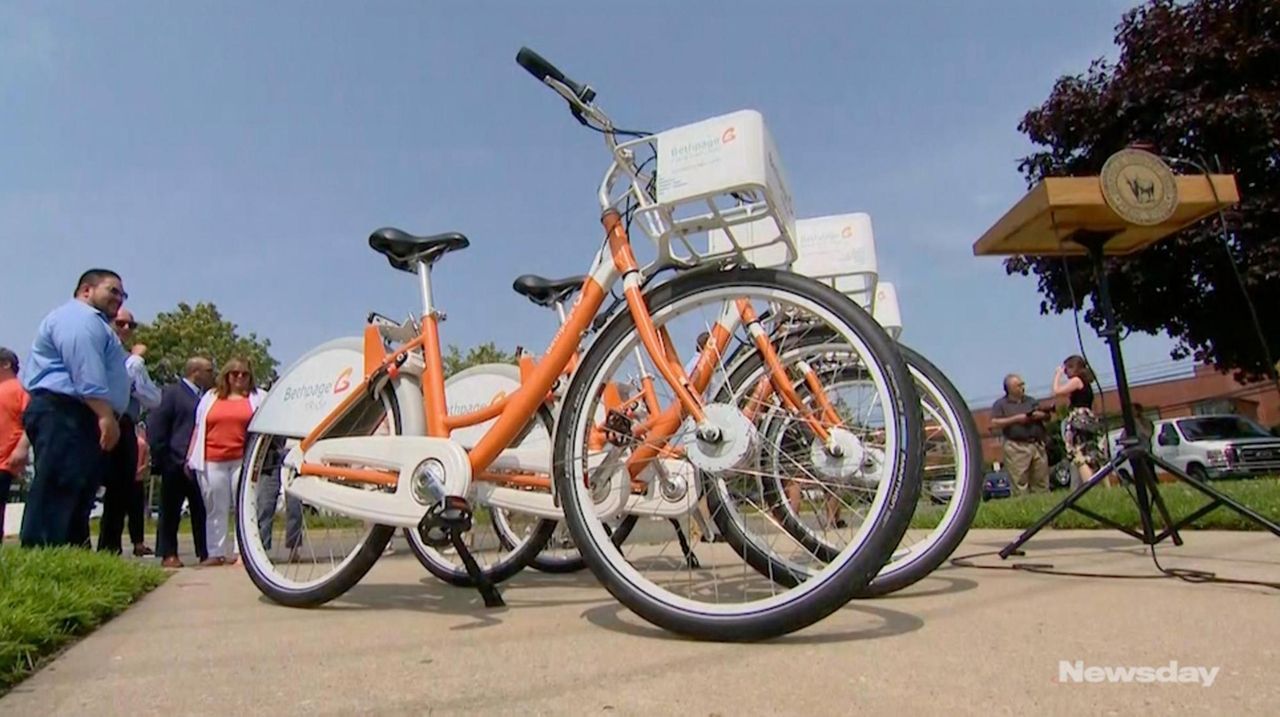 On Wednesday,  Deputy County Executive Theresa Ward spoke about Bethpage Ride, the bike-share program that will roll out next month in Patchogue and Babylon villages, helping to reduce congestion on the roads.    Credit: News 12 Long Island

A bike-share program will roll out next month in Patchogue and Babylon villages after two years of planning, Suffolk County officials announced Wednesday.

Riders can use a phone app called Pace to unlock the orange bikes at 24 stations in four communities, two of which have yet to be determined, officials said. Despite the program's name — Bethpage Federal Credit Union is the sponsor — there won't be stations in Bethpage, which is a hamlet in Nassau.

Officials said they aim to eventually have 400 bikes available throughout the county. The program will be similar to one in Long Beach, which has a bike-share program with 100 bikes at 11 stations, city spokesman Gordon Tepper said.

To demonstrate the benefits of biking, officials took the five-speed orange bikes with white baskets for a spin. But while still circling a parking lot where a news conference was held, Patchogue Village Mayor Paul Pontieri — who later said he had not ridden a bike in at least a decade — crashed into Ward’s bike, sending him tumbling and Ward flying off her bike.

“Nobody got that, did they?” Pontieri joked to a row of television cameras and reporters as he stood up.

A crew of about five officials — only some of which wore helmets — averaged about 8 mph as they rode about a mile down South Ocean Avenue, from the Patchogue Long Island Rail Road Station to Mascot Dock.

Most officials then got in cars to get to their next destinations. When three officials cycled back — including Patchogue Village trustee Joseph Keyes and his son, Jonathan Keyes, who spearheaded the program as county director of downtown and transit-oriented development — a car honked at them, prompting them to move farther into the shoulder.

County officials did not outline specific safety measures for the program, which will launch even as an increasing number of bicyclist fatalities in New York City — 14 this year — has raised concerns about bike safety.

In the past 5 1/2 years, there have been 24 bicyclist fatalities from motor vehicle accidents in Suffolk, according to county police data from between Jan. 1, 2014, and June 30, 2019. There has been one fatality this year.

Ward said she is confident the program will launch in places that are most compatible with biking and that getting more bikes on the road will increase cycling safety awareness. Riders will have to bring their own helmets, just like with Citi Bike.

Ward added that a county hike-bike master plan, expected to be unveiled later this year, will show paths available throughout Suffolk. There is also a $10 million plan for a bike-and-hike trail on the North Shore of Suffolk, connecting Port Jefferson Station to Wading River.

The program will be run at no cost to the county. Boston-based Zagster Inc., which runs more than 200 such programs throughout the country, will pay for operations, maintain the bikes and collect revenue.

Rides will cost $1 per 30-minute ride, $10 per month or $60 for an annual membership, said Dave Reed, Zagster’s sales manager.