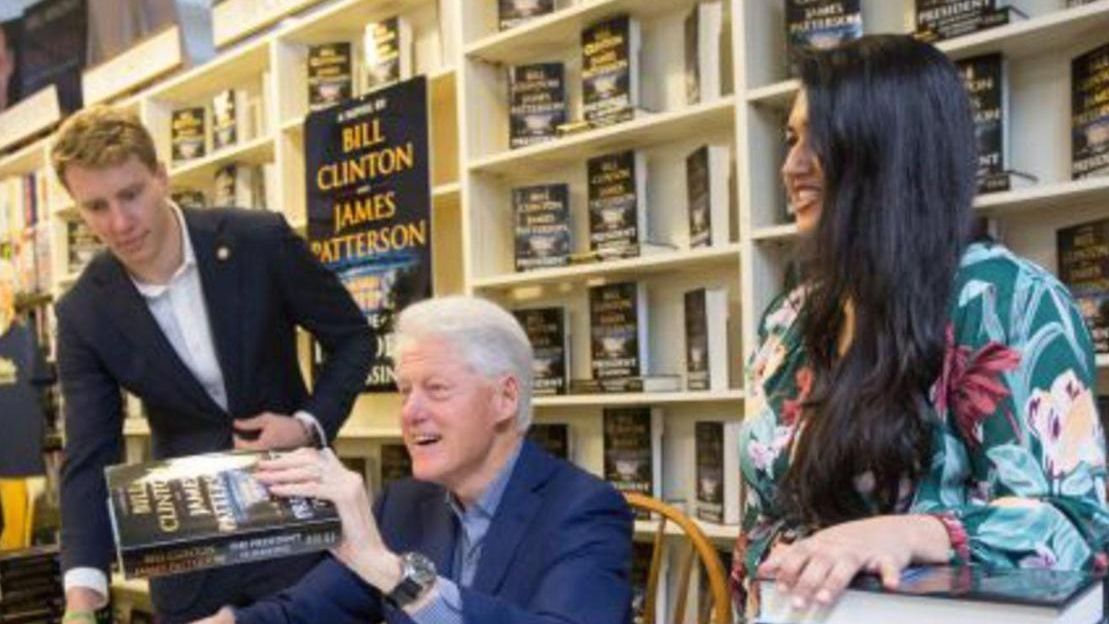 A crowd of about 500 stretched from New York Avenue and snaked down Main Street in Huntington on Thursday, to meet former President Bill Clinton and author James Patterson, as they signed copies of their new book “The President is Missing.” Each person paid $30 for a chance to greet Clinton and Patterson and get an autographed cop of the book, a fictional 500-page thriller about a president who disappears as he tries to prevent an apocalyptic cyber attack.

Bill Donohue arrived at Book Revue in Huntington before 8 p.m. Wednesday night, eager to be first in line to meet former President Bill Clinton and author James Patterson on Thursday morning as they signed copies of their new book "The President is Missing."

But Donohue said obtaining the John Hancock of the 42nd president is something special.

"He's a two-term U.S. president," Donohue said as he waited to enter Long Island's largest independent bookstore. "It's very important. I respect the office of the president, and I respect Bill Clinton."

A crowd of about 500 — some wearing Bill Clinton pins or Hillary for President paraphernalia — stretched from New York Avenue and snaked down Main Street, each person waiting for a chance to greet Clinton and Patterson and get an autographed copy of the book, a fictional 500-page thriller about a president who disappears as he tries to prevent an apocalyptic cyber attack.

During brief interactions with patrons, Clinton, wearing a blue suit without a tie, shook hands with guests, smiled and occasionally reminisced about his time in office.

One man asked Clinton, who rented a home in East Hampton in 2011 and 2012, if he still played the saxophone. "Yes, sometimes for my grandchildren," Clinton replied in his trademark southern drawl.

Another woman offered that she voted in 2016 for his wife, former Secretary of State Hillary Clinton. Bill Clinton responded with a simple "thank you."

The  book tour got off to a rocky start last month when Clinton was asked by an NBC News reporter about his affair with White House intern Monica Lewinsky in the context of the #MeToo movement. Clinton told NBC News that he did not owe Lewinsky an apology and that he left the White House $16 million in debt.

"Nobody believes that I got out of that for free,” Clinton said in the interview.

But Long Islanders Thursday seemed unconcerned about Clinton's past indiscretions.

"I can't wait to shake his hand," said Sigmund Seignious, 30,  of Mastic who got on line at 2.a.m. "He did a lot for this country. He deserved a third term."

Amityville's Kenneth Lane, a President Donald Trump supporter who protested outside the event, disagreed and said Clinton did not deserve the public's adulation.

"The Clintons sold us down the river," said Lane, who wore a "Hillary for Prison" T-shirt and a "Make America Great Again" hat. "Their reign is over. Praise God that we have Donald J. Trump in the White House."