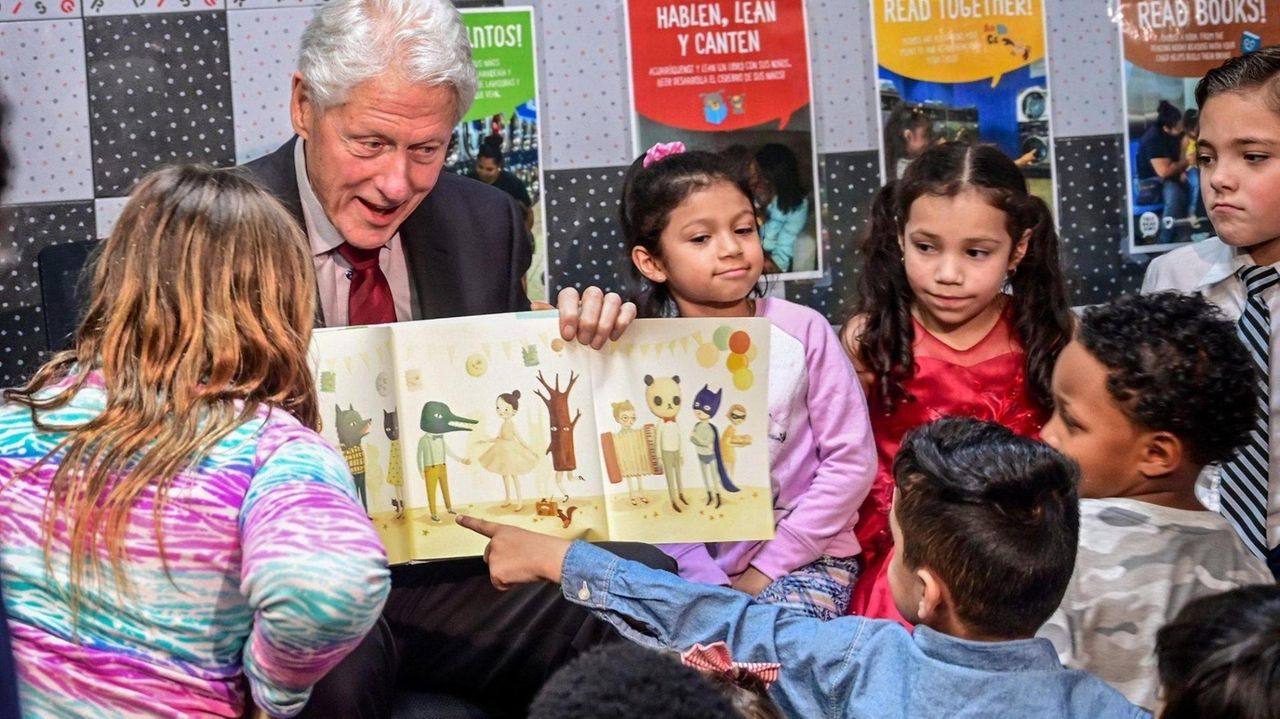 Former President Bill Clinton read "The Wonderful Things You Will Be" to children on Tuesday while visiting Laundro Lux in Deer Park. The laundromat unveiled a new literacy-rich play space, thanks to Too Small to Fail, the Clinton Foundation’s early childhood education initiative, and its partnership with the LaundryCares Foundation. Credit: Newsday / Thomas A. Ferrara, Steve Pfost

Joyce Sansiviero of Wheatley Heights and her 8-year-old daughter, Julia, never expected to see the nation’s 42nd president milling about the shiny machines — much less a phalanx of Secret Service agents — as they did their laundry Tuesday night at Deer Park’s Laundro Lux.

But there he was, Bill Clinton, far from his and wife Hillary's Chappaqua home base in Westchester County, walking into the laundromat. No, the former two-term Democratic commander-in-chief did not come to Deer Park to do a load of whites and read a briefing paper while he waited.

He stopped off at the laundromat to promote a reading program allowing parents to convert laundry time into library time for their children through “Wash Time is Talk Time," an initiative launched in 2015 by the Clinton Foundation's Too Small to Fail program.

“Before we started most of them had nothing to do when they’re here," Clinton said of children who often tag along when their parents do the laundry. "So, we decided we were going to try to work with them and set up these reading spaces, play spaces and make them learning environments. It’s been, as you see, a great success. The kids love it.”

As part of the effort, Laundro Lux installed a book nook, complete with a sofa and classic and contempory reading materials children can browse while the washers and dryers churn out clean clothes.

“That’s very nice,” Joyce Sansiviero said of the program. “Not only am I doing chores, but my daughter is getting knowledge.”

Clinton read passages from the children's book, "The Wonderful Things You Will Be" to Julia and 8-year-old Dyashia Martin, of Brentwood, and other youngsters. Dyashia's mother, Charlene Moore, called the initiative a “pretty good” program. The space where Clinton sat with children included other books catering to children up to eight years old.

The selections include "Knuffle Bunny," "Is Your Mama a Llama?," "DJ’s Busy Day," "Goodnight Moon" and "The Rooster Who Would Not Keep Quiet."

Clinton spoke above the din of change machines spitting out quarters and the hum of dryers to say he was “thrilled” when he learned that the coin-operated laundry industry was interested in installing “Family Read, Play & Learn” spaces in their establishments.

Jane Park, director of Too Small To Fail, said along with the Clinton Foundation, funding partners include LaundryCares, an Illinois-based nonprofit that provides laundry services to those in need while encouraging literacy. She said the foundation hopes to put the program in 600 coin laundries nationwide in 2020, with as many as a dozen on Long Island. It costs between $1,800 and $3,800 to set up a "Family Read, Play & Learn" space, she said.

“Laundromats are places where families typically spend two-and-a-half hours each week and usually there’s not a lot for children to do," Park said. "So our goal in partnering with laundromats is to create a literacy-rich play space to help families really turn that wash time into meaningful opportunities for parents to engage with their children.”

Brian Wallace, president and chief executive officer of Coin Laundry Association, said the program is a win-win for his members and families.

“It’s a way for us to really give back to the communities that support our business,” he said. “If we can have this opportunity of creating a space for them to learn and to grow, they win, we win and — let’s face it — it’s also good for business.”

Ralph and Rosalie Macchio, owners of Laundro Lux, said they were happy to host the space.

”I’m a big advocate of it,” said Ralph Macchio, who also owns coin laundries in North Babylon and Southampton, adding that he hopes to install the reading spaces in his other locations.

“I believe that training kids at an early age is extremely important especially to keep them away from things like liquor and drugs," he said. " … I think it’s a perfect opportunity while the parents are here for that hour to two hours that the kids, who have nothing to do in that period of time, benefit from an education.”