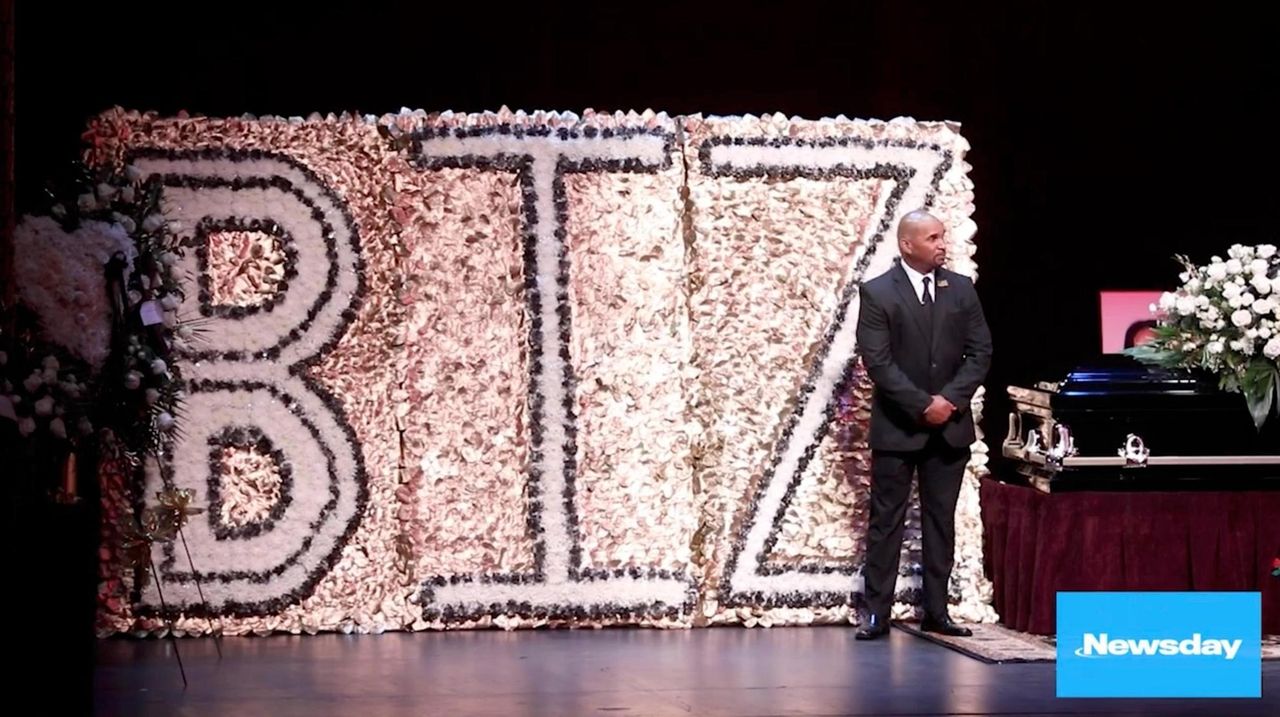 Family and friends attended the funeral of hip-hop legend Biz Markie at the Patchogue Theatre for the Performing Arts.  Credit: Newsday / Reece Williams

﻿Family and friends paid their last respects Monday to Biz Markie, a hip-hop artist who rose to stardom through countless Long Island house parties and never lost touch with his roots.

The Rev. Al Sharpton, who gave the eulogy inside the Patchogue Theatre for the Performing Arts, said Markie "kept it real all the time"

"He never lost that authenticity," Sharpton told the crowd, which included celebrities such as LL Cool J. "He cared for people. He was more than just a friend, he was an icon."

Markie’s widow, Tara Hall, recalled him telling her that besides being a DJ, the best part of his job was "just being me."

Markie, whose real name was Marcel Theo Hall, died on July 16 at the age of 57 following a career that spanned nearly four decades that included making music, then transitioning to become an in-demand DJ for celebrities and making cameos in films and a children's show.

While dozens of fans stood outside the theater during the service, billed in the program as "The Final Show," inside his black coffin was surrounded by letters that spelled out BIZ in flowers, while an artist painted a giant, colorful portrait of Markie.

Those who knew Markie, who was born in Manhattan and later moved to Patchogue, said he kept close ties with those he grew up with, never forgetting where he came from.

Johnny Nunez remembered meeting Markie when they both attended junior high school in Brentwood. He recalled Markie was beatboxing at the time — a form of vocal percussion using the mouth and teeth to mimic a drum machine or other musical instruments.

Though Nunez did not get into music, taking up photography instead, the Brentwood native said Markie never forgot about him when they crossed paths at celebrity functions years later.

"He loved everyone," Nunez said. "He was an ambassador of humanity, a cultivator of culture and I'm going to miss him."

Markie performed in fundraising concerts at Wyandanch Memorial High School, starting in Feb. 1985, along with friends that included Belal Miller, who was working as a DJ in his early years.

Ralph Horton, who met Markie at 14, called him "a gift" and said he came to his aid when Markie needed him. As Markie grew bigger in music, he brought along Horton.

"He made me look at there was more to life than Long Island, that little fishbowl that we know as Long Island," said Horton, who was Markie’s road manager from 1988 until 1992 and again from 2004 to 2007. "And I’ll never forget that. He changed my life."

McDaniels said Markie’s creativity lives on through his videos that "still to this day stand" through songs such as his 1989 single "Just a Friend."

Markie’s cousin, Vaughan Lee, known as DJ Cool V, said he touched so many people through his music.

"He wanted to put Long Island on the map," Lee said, holding back tears. "Biz was a big, big dreamer."