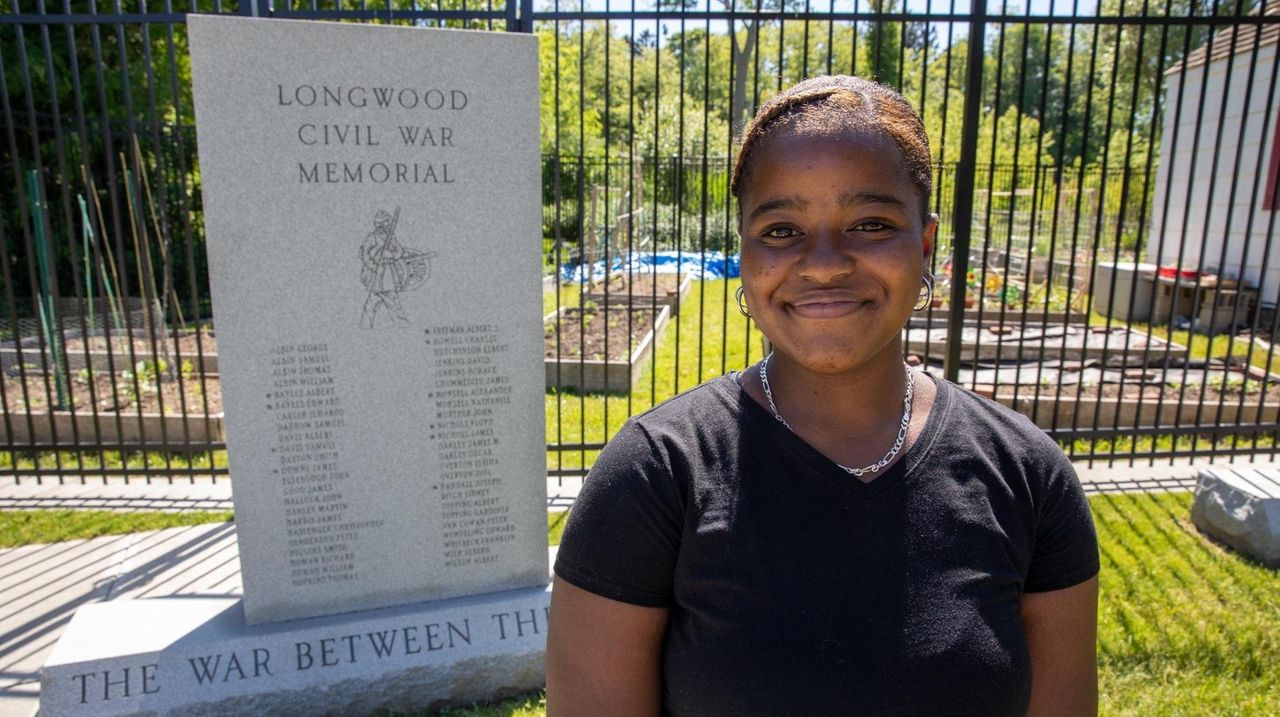 Thanks to a student at Longwood Junior High School, the name of a Black Union soldier who died during the Civil War has been added to a veterans monument at Bartlett Pond Park in Middle Island. Credit: Morgan Campbell

Albert Freeman of Middle Island had been lost to history for more than 150 years.

But after a junior high school student put together the missing pieces of his story, the Black Union soldier who died during the Civil War has had his name added to the Brookhaven Town hamlet's veterans monument — and it will be unveiled on Memorial Day.

"It was like putting puzzle pieces together," said Carlie Preudhomme, 13, an eighth-grader at Longwood Junior High School in Middle Island who said she spent a year researching Freeman. "It was like a trickle-down system where it all matched up. It was like, this is him."

Freeman's name will formally join those of 46 other Civil War veterans from the Middle Island area during a Monday morning ceremony at Bartlett Pond Park. The town park in Middle Island includes a memorial honoring veterans of wars dating to the American Revolution.

Freeman will be the first Black Civil War veteran to appear on the stone memorial, civic leaders said.

Albert Freeman, born in Middle Island in 1840, had volunteered to fight for his country in 1863, joining a unit of Black soldiers in the Union army. He died the following year of dysentery, a common malady among Civil War combatants, at Fort Jackson in Louisiana.

But Freeman's story was not widely known in the community — the apparent consequence of a misspelled name and racial bias that often overlooks the historical contributions of Black Americans.

"They were very instrumental in the American history," said E. James Freeman, who said he was not aware of any possible ancestral links to Albert Freeman. "That’s something that’s not recognized in the textbooks for the kids in school. … They had a presence, it just hasn’t been recognized."

Middle Island Civic Association president Gail Lynch-Bailey said adding Freeman's name "is such a noble effort to expand and enrich Longwood’s history, and it couldn’t happen at a better time for this nation’s history." She was referring to Tuesday's anniversary of George Floyd's death after a Minnesota police officer knelt on his neck for more than nine minutes last year.

Preudhomme's research, assisted by Longwood social studies teacher Victor Massian, was part of an ongoing effort by the district to help add names to the 14-year-old veterans memorial.

Carlie Preudhomme said her breakthrough came when she was able to show that Freeman, whose first name sometimes appeared in records as Elbert, was the same man who died at Fort Jackson.

She said she was unable to find pictures of Freeman or living descendants, but she vowed to continue exploring his story.

"I can’t bring Albert Freeman’s body home," she said. "But we can bring his name home."