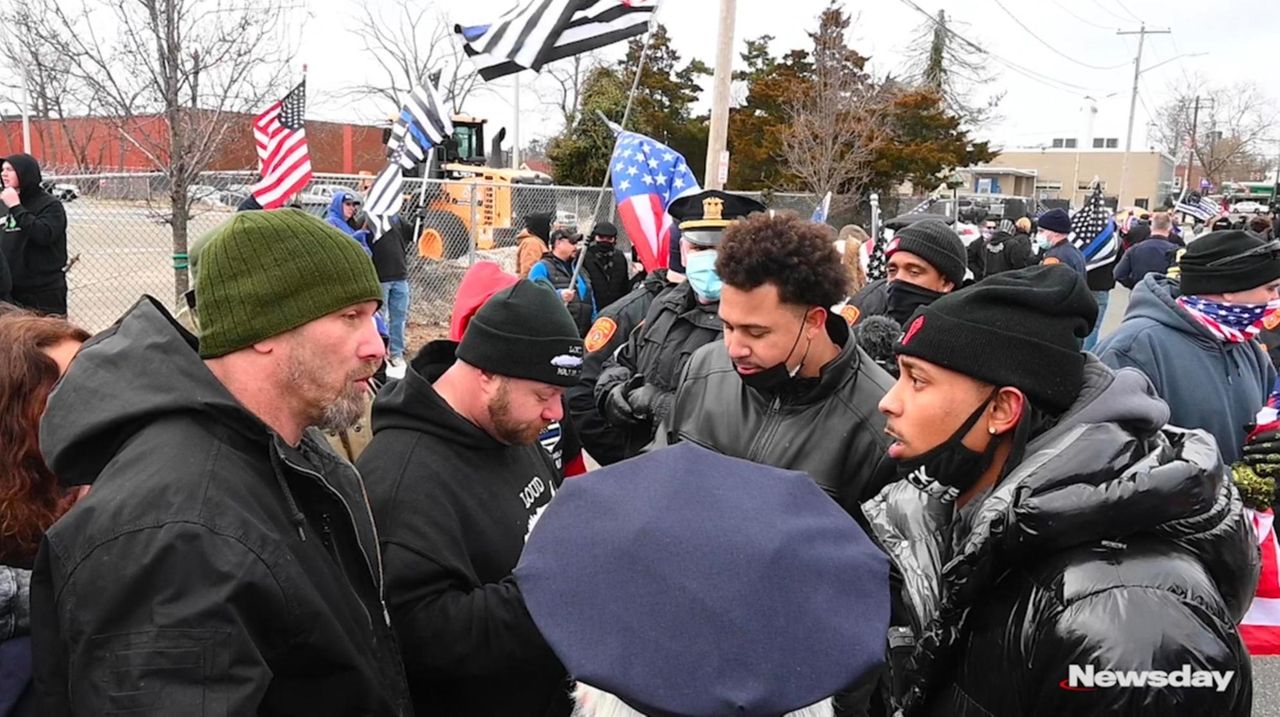 What started as peaceful protests by Black Lives Matter and Blue Lives Matter demonstrators Saturday in Smithtown ended in clashes between individuals from both sides that led to at least two arrests.

Another scuffle that broke out nearly 20 minutes later resulted in at least one BLM protester being arrested.

Before that, protesters on both sides at times exchanged heated words and dueling chants of "USA! USA!" and "Black Lives Matter!" while a few others from both sides appeared to have calm discussions and were even seen shaking hands.

"We’re all one family in law enforcement," said Steven Sluggs, 45, a retired police officer from Deer Park. "I don’t believe the flag is insensitive. It represents an organization and people giving their lives to save other lives."

Vincent Franco, 60, of Amityville, was waving a blue line flag to support police, and a red line one to support firefighters. Franco said police were being unfairly targeted, though most just want to help the community. "I think everything going on is unfair and they’re taking it too far," Franco said. "They want drama. Why can’t everyone get a long. All lives matter."

Kevin Smith, 31, of Lindenhurst, said he was happy that the fire department had reinstalled the controversial flag.

"That blue line is what keeps us from chaos. We’ve seen that in cities across the country," said Smith, who added later that he didn’t think that the BLM protest, which was considerably smaller, would lead to any violence. "And if there is, it won’t be started by any on our side. We are nonviolent people, and we are that by nature. They have a right to be out here and so do we."

Terrel Tuosto, a BLM organizer, said Saturday the thin blue line flag was clearly a political message with racist overtones and needed to be taken down.

"It’s a complete diminishing of me as a person and us as a movement and it’s unacceptable," Tuosto said.

Last month, Smithtown Fire Department officials said they would remove the thin blue line flag from the vehicle to comply with orders from police chiefs nationwide to restrict or ban displaying the flag. The flag was removed after a Newsday reporter contacted fire commissioners with questions following a tip and photo received from a local woman of the flag flying from the back of the Rescue 9 truck.

However, days later, Smithtown Fire District commissioners announced they were reversing the decision and allowing the flag to be displayed on the truck after receiving an "overwhelming community response," according to a statement on the department’s website.