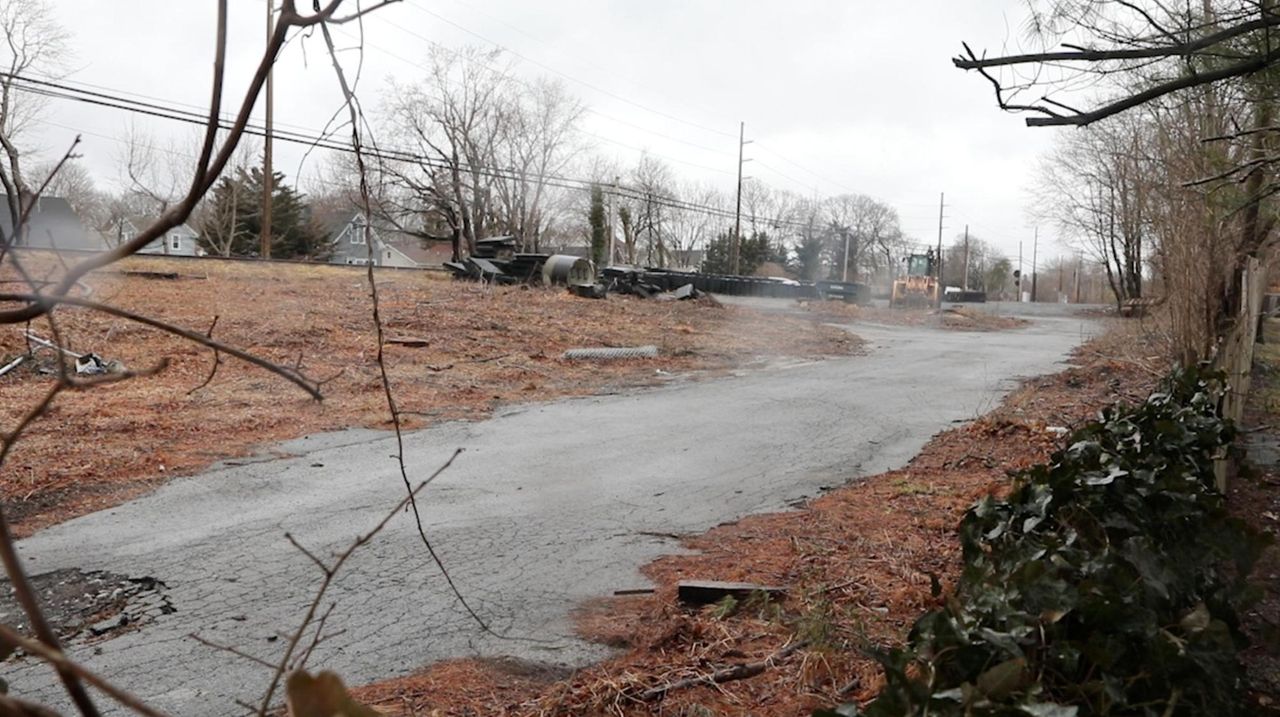 Blue Point residents on Friday discuss the Long Island Rail Road's use of a defunct train station as a storage site, which they say is negatively impacting their quality of life. Credit: Jessica Rotkiewicz

Blue Point residents say a defunct train station that the Long Island Rail Road has opted to use as a storage site is negatively impacting their quality of life.

“They took a sleepy little railroad back there and they’re turning it into Penn Station,” said Michael Keil, 73, board president of the Springhorn condominium community along Blue Point Avenue near Park Street.

The 70-unit housing complex abuts the former train station which went out of use in 1980, Brookhaven and local leaders said.

The LIRR has maintained ownership of the property and in February began using it to store rails, concrete and other materials.

The site is located between the 55-years-and-older Springhorn housing complex on the south side and other residences on the north.

Town Councilman Neil Foley, who represents the district, said Brookhaven doesn’t have any authority over the state regulated LIRR or its land.

“That’s their land, they own it, but I do want them to be good neighbors to the community,” Foley said. “I want to make sure of what they’re doing, when they’re doing it, and what’s being stored there.”

The LIRR plans to use the site as storage for the duration of two projects, the replacement of railroad ties between Babylon and Sayville and upgrading the signal system. The signal-upgrade project is expected to last until June 2023.

“There is an extraordinary amount of track and infrastructure work going on across the LIRR system right now to improve safety and reliability of the LIRR, and the use of this space is one indication of that," said LIRR spokesman Aaron Donovan. "We are working to communicate directly with all neighbors and elected officials, and to minimize the sights and sounds of material deliveries.”

The councilman and residents met with LIRR officials last month to discuss the matter.

During the meeting, Foley asked for soundproof fencing or some alternative to help mitigate the noise and discussed with the LIRR the intended hours of operation for the yard.

Jason Borowski, president of the Blue Point Community Coalition, said officials at the meeting told him the yard would be in use 24 hours a day. The LIRR said work hours at the site are generally scheduled to be from 7 a.m. to 3:30 p.m.

“Neither of [those options] works for us,” Borowski said.

Residents are circulating a petition with more than 400 signatures to have the storage area moved elsewhere, the community leader said.

When Foley asked officials about the potential for contamination, he said he was told the project won’t hurt the environment and that no chemicals would be stored at the site. Foley said he wants the LIRR to commit to that in writing.

“There’s a lot of groundwater nearby, and people are concerned about the materials seeping into the ground water. That could affect water and the Great South Bay,” the councilman said.

Keil said the storage facility is not compatible with the residential area.

“The work being doing here doesn’t fit with the community," he said. "It would be nice if they moved down to an industrial area instead of affecting our home."