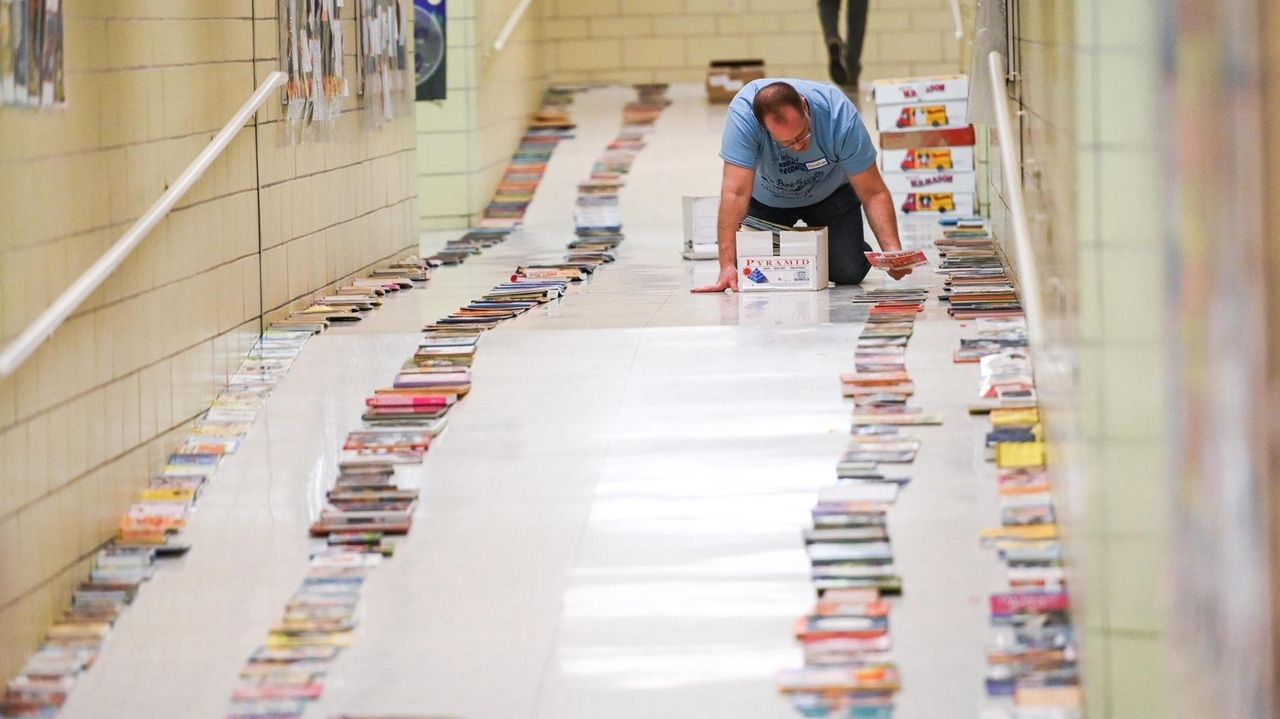 The hallways, gyms and sidewalks of two elementary schools in Wyandanch were lined with 31,000 books on Thursday, setting what a nonprofit organization believed was a Guinness world record for the longest line of books. The Book Fairies organization said that by their calculations and those of surveyors, they broke the current record of 2.64 miles, laying down at least 3 miles of books. At the end, all the books were donated to Wyandanch schools and the community. Credit: Newsday / Chris Ware

The hallways, gyms and sidewalks of two elementary schools in Wyandanch were lined with 31,000 books on Thursday, setting what a nonprofit organization believed was a Guinness world record for the longest line of books.

The Book Fairies organization said that by their calculations and those of surveyors, they broke the current record of 2.64 miles, laying down at least 3 miles of books.

“This is unreal,” said Lisa McQuilkin, a professional surveyor who volunteered to measure the lines, as she and her team of eight technicians arrived at the schools Thursday afternoon. “I’ve never seen this many books even in libraries, I think.”

The event was about more than just breaking a record, though. At the end, all the books were donated to Wyandanch schools and the community.

Some 150 volunteers helped in the effort, which at times resembled a military-style operation in its organization and detail.

They included a videographer to document the attempt and two official witnesses.

At one point, an organizer instructed volunteers in a gym that each book could overlay the one next to it by only one inch; “otherwise we will lose mileage.”

Every book was counted and measured before the attempt, said Eileen Minogue, the Freeport-based group’s executive director.

The Guinness organization officially approved the attempt, though it will take up to 12 weeks to confirm the record was broken, she said.

“This is awesome,“ said Monique Habershan, principal of the King school. The students “are just over the moon about this.“

Most of the laying down of the books started after school was let out, and continued into the late afternoon as darkness fell.

There were so many books that lines had to be run outside the schools and onto a sidewalk. One line had to weave its way around a puddle.

Organizers decided to leave the books in the school overnight, and allow the students to see them and collect them Friday morning.

The books were mostly for children, but also included adult-level novels, nonfiction, dictionaries and test prep books. There were even old copies of The Guinness Book of World Records.

Organizers said the overriding goal was to improve access to educational opportunities for residents of Wyandanch, one of Long Island's poorest communities.

“Our goal is to end the cycle of poverty that stems from illiteracy,“ Minogue said. “Access to books is a proven solution to illiteracy.”

The event was “about wrapping our arms around a community that needs us.”

Amy Zaslansky, who founded the book group in 2012, said it had “always been a bucket list of mine to break a Guinness world record.”

“This is absolutely incredible,” she said as the final books were put in place.  “I never could’ve imagined that something that started so small in my garage would turn into a charity that has donated two million books and we are just about to finish breaking a world record.”

The group donates some 500,000 books a year, including some sent to Africa, she said.

The books come from individuals, schools, companies, libraries and other institutions.

They are stored in a donated Freeport warehouse that the group is outgrowing.

Zaslansky said the first book in the line Thursday was one her father often read to her when she was a child: “The Little Engine That Could.”