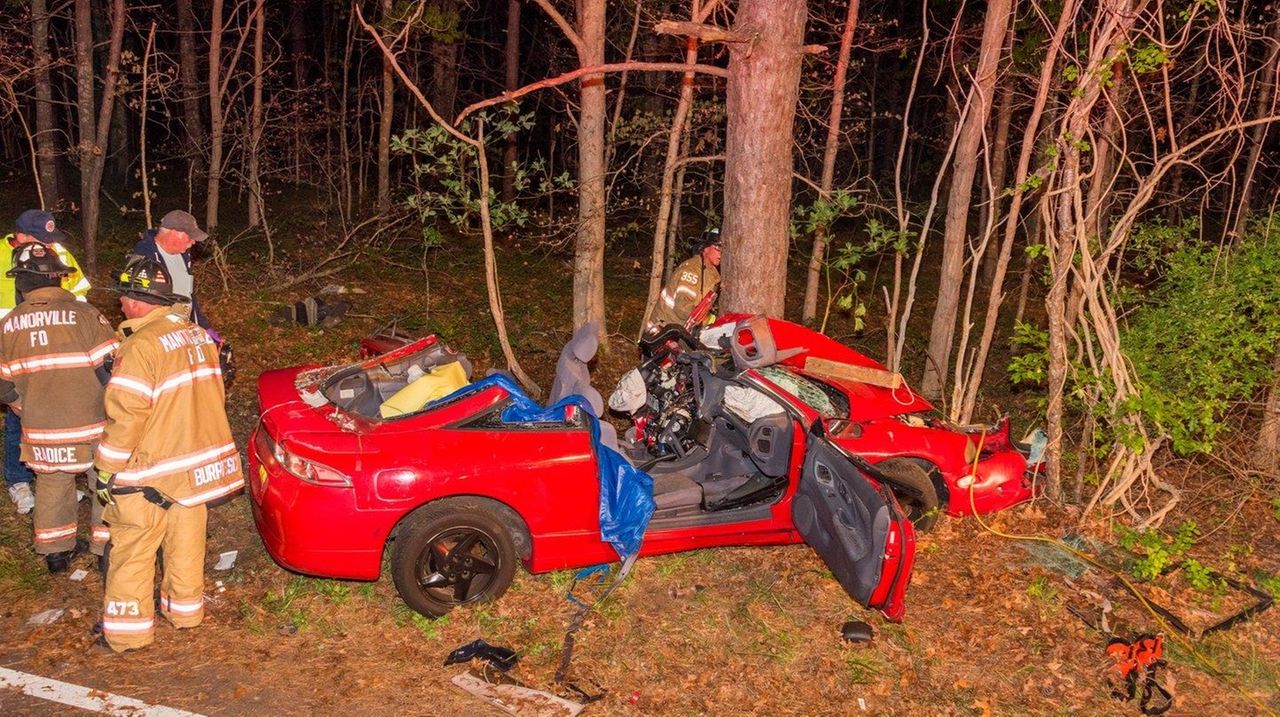 A 17-year-old boy set to graduate from high school in June was killed Saturday night, May 20, 2017 and two others were seriously injured when their vehicle struck a tree in Manorville, said Suffolk police and the mother of one of the survivors. Police identified the teenager who died as Isaiah Perez, of Shirley. Credit: Stringer News Service

Counselors were made available to students Monday at the high schools attended by two of the three 17-year-olds involved in a fatal car crash in Manorville.

Longwood High School senior Isaiah Perez, of Shirley, who was set to graduate from the Middle Island school next month, was killed and the two other teens were seriously injured when their vehicle struck a tree Saturday night, Suffolk police said.

“It is with heavy hearts that the Longwood School community mourns the loss of one of our students, Isaiah Perez, who passed away in a car accident late Saturday evening,” schools Superintendent Michael R. Lonergan said in a message posted Monday on the district’s website.

Lonergan added the district’s crisis intervention team — including counselors and school psychologists — is available for students and staff on Monday morning to offer any needed support.

“We are all grieving for the loss of a young life, and our heartfelt sympathy and prayers go to Isaiah’s family and friends,” Lonergan said.

Police said the crash occurred shortly before 9 p.m. Saturday when a 1995 Mitsubishi heading west on North Street near South Street veered off the road and hit a tree.

Police said the car’s driver — identified as Edenilson Trejo, also 17 and from Shirley — had lost control of the vehicle.

Perez was a passenger along with Tyrese Ramseur, also 17, of Bellport, police said.

Trejo and Ramseur were taken to Stony Brook University Hospital for treatment of their injuries. A police spokeswoman said Monday that Ramseur was in critical condition and that Trejo was in stable condition. Perez was pronounced dead at Brookhaven Memorial Hospital Medical Center in East Patchogue.

The spokeswoman said the cause of the crash remained under investigation.

Tyrese Ramseur’s mother, Tiffany Ramseur, 42, said her son, a student at William Floyd High School in Mastic Beach, and Perez had been “best friends” for about four years. Both were seniors scheduled to graduate next month.

She said she did not know Trejo.

Her son had finished his shift at a Taco Bell restaurant in Shirley right before the crash, Ramseur said. She said her son knows nothing about the death of his friend because he is in the hospital and is “not responsive.”

James Montalto, a spokesman for William Floyd, said Ramseur is on the school basketball team and that “he’s in our thoughts and prayers.”

Montalto said counselors were also made available Monday for students at William Floyd.

Information about the school Trejo may have attended was not immediately available.

Detectives are asking anyone with information on the crash to call the Seventh Squad at 631-852-8752.