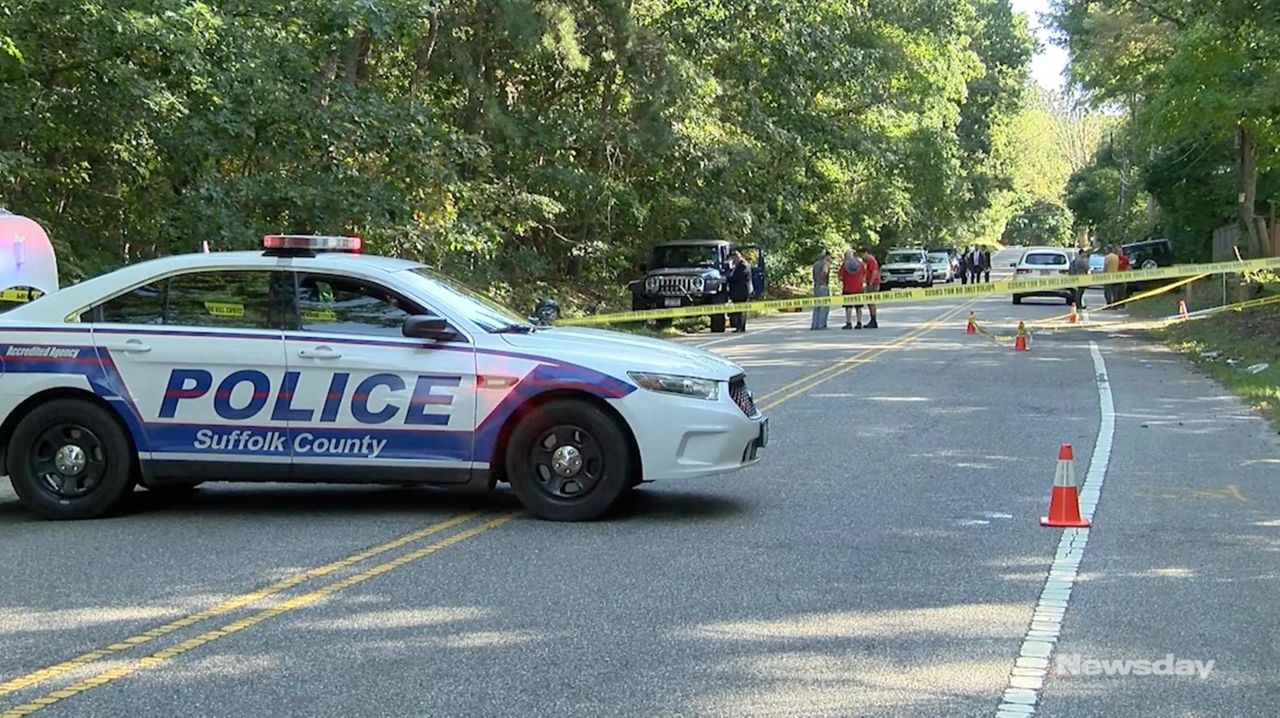 Thomas Murphy, 59, the man whose car allegedly struck a group of Boy Scouts Sunday afternoon, was charged with driving while intoxicated and had his driver's license suspended during arraignment Monday in First District Court in Central Islip.

A 12-year-old Wading River boy died Monday from injuries he suffered when an alleged drunken driver described by a judge as a "clear and present danger" drove his Mercedes into a crowd of Boy Scouts walking on a Manorville roadway, police said.

Thomas Murphy, 59, told police he had been drinking Sunday morning while playing golf at the Swan Lake Golf Course in Manorville before taking the wheel.

"Yes, I had three drinks," Murphy told police, according to the criminal complaint. "Are the kids OK? I know you're going to arrest me."

Andrew McMorris, a seventh-grader at Prodell Middle School in Shoreham, was among 18 youths and adults walking as a Scouting group — all wearing bright red clothing — and heading north on the shoulder of David Terry Road in Manorville when they were struck by a 2016 Mercedes driven by Murphy, Suffolk prosecutor Jacob DeLauter said.

Andrew, who was taken by helicopter to Stony Brook University Hospital, died from his injuries Monday, police said.

Murphy was arraigned in First District Court in Central Islip on Monday on a single charge of DWI. Prosecutors are expected to pursue upgraded charges related to Andrew's death, officials said.

“Gross negligence was involved," DeLauter, an assistant district attorney in the vehicular crime bureau, said in court Monday. "This was a clear, sunny day. The road was dry. There were no visual impairments.”

District Court Judge James Matthews suspended Murphy's driver's license Monday, calling him "a clear and present danger to the residents of New York State." Murphy posted $500,000 bond Monday afternoon and was released, officials said. He is due back in court Oct. 11.

No one answered at his home Monday afternoon.

The Suffolk County Council of Boy Scouts said Shoreham's Troop 161 was on an organized hike in the area, had come out of the woods and was traveling along the road before heading back into the trail, officials said.

Murphy was driving south on David Terry Road shortly before 2 p.m. when he struck the five Scouts about 1,000 feet north of Mill Road, police said.

Police said Murphy had a "strong odor of an alcoholic beverage on his breath, slurred speech, watery bloodshot and glassy eyes, was unsteady on his feet, did verbally admit to consuming alcoholic beverages earlier that day and did display clues indicative of intoxication," according to charging documents.

Murphy refused to take a Breathalyzer test at the scene but police later drew his blood at the Seventh Precinct in Shirley, officials said.

“This is a heartbreaking tragedy for these boys, their families, the Boy Scouts, and all of Suffolk County," said Suffolk County District Attorney Timothy Sini, who pledged to leave "no stone unturned, and where appropriate present additional charges before a Suffolk County grand jury so that this defendant is held fully accountable for his actions.”

Scout Thomas Lane, 15, of Shoreham, was airlifted to Stony Brook University Hospital, where he is being treated for serious injuries, police said.

The other victims — Denis Lane, 16, of Shoreham; and Kaden Lynch and Matthew Yakaboski, both 15 and of Calverton — were taken to Peconic Bay Medical Center in Riverhead, where they are being treated for non-life-threatening injuries, police said.

Murphy's attorney, Steve Flynn of Hauppauge, described his client as a 25-year resident of Suffolk County and a father and husband who has undergone two heart surgeries.

"This is a tragedy for everyone," Flynn said, expressing his condolences to the victims.

In a Facebook message Monday, the Boy Scout Council of Suffolk County said "our scouting family is going through a terribly painful time . . . We offer our deepest condolences to the victim's family, and we will support them in any way that we can. Our thoughts remain with the Scouts still recovering."

The council said it emphasizes safety in "everything we do" as it strives to create "the most secure environment possible for youth members."

The Shoreham-Wading River school district said in a statement Monday: "Our Crisis Response Team met early this morning to formulate and implement a plan to aid our school community [in coping] with this loss. Support services will be made available to students and staff as needed."

Grief, anger as family remembers Boy ScoutAndrew McMorris, who died after being struck by an alleged drunken driver, was remembered for his adventurous spirit and outgoing personality. Cops: Drunken driver hits 5 Boy Scouts on Suffolk roadA Holbrook man whom police said was driving drunk struck a group of Boy Scouts walking on the shoulder of a Manorville roadway, critically injuring one scout and sending four others to the hospital, authorities said. Search violent, property crime rates in your areaThere were 35,525 violent or property crimes recorded on Long Island in 2017 by the state's Division of Criminal Justice Statistics, a 7.8 percent decrease from 2016.

Four Long Island districts back at polls today for budget votes
Nurse-practitioner comes back to LI to pay it forward
Nassau DA: Woman posed as immigration attorney
Lottery payouts to winners delayed by glitch
2:11
State at 70% COVID vaccination level for adults; Hempstead and Greenvale lag
1:39
LIers with weakened immune systems still wary of COVID-19
Didn’t find what you were looking for?