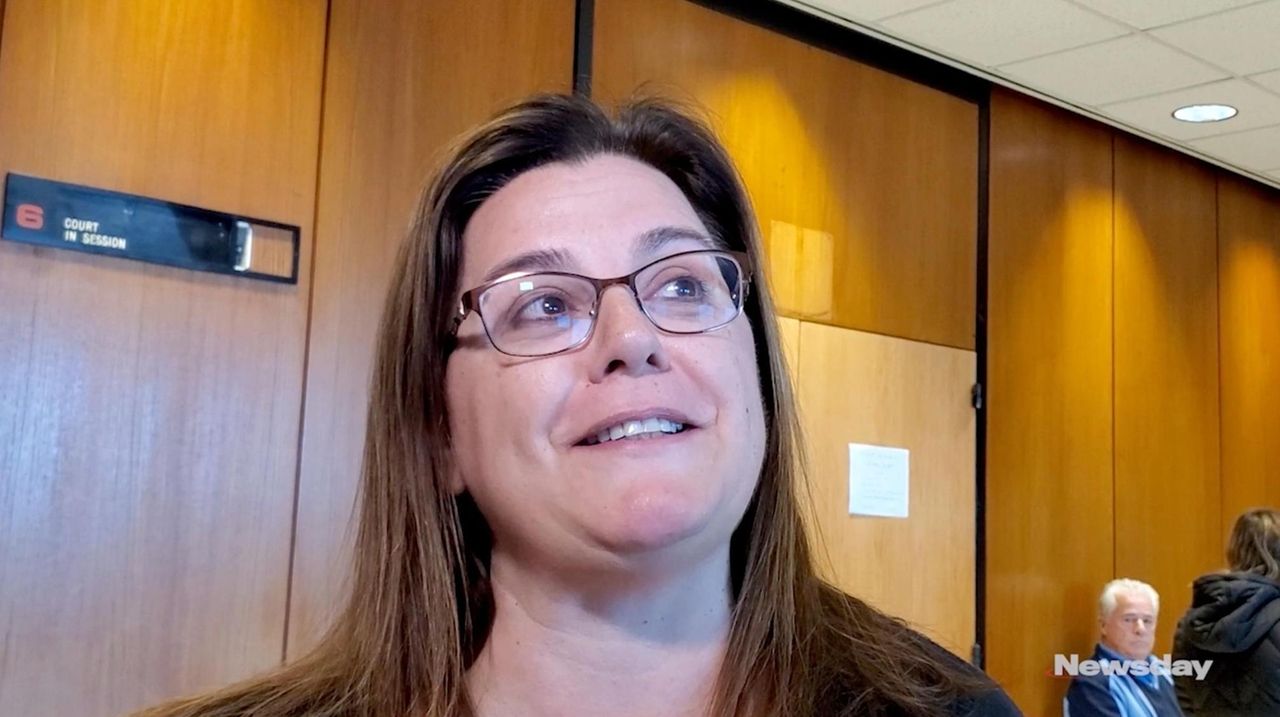 The mother of 12-year-old Shoreham boy Andrew McMorris, who died after being hit by an alleged drunken driver during a Boy Scout hike in 2018, spoke Thursday after day two of the trial. Credit: James Carbone; Photo Credit: Family of Andrew McMorris

An assistant scoutmaster testified Thursday that he saw 12-year-old Andrew McMorris crash into the windshield of an allegedly drunken driver last year before landing face down on the side of a Manorville road.

Daniel Blunnie's voice quivered as he described the moment on Sept. 30, 2018 when Thomas Murphy's white Mercedes SUV crashed into a crowd of hiking Boy Scouts walking along the side of David Terry Road.

"I saw Andrew spin through the air after hitting the windshield," Blunnie told a jury of seven men and five women at Murphy's trial in Riverhead, adding that the SUV's four wheels crossed over the road's white fog line.

Blunnie said McMorris, who died of his injuries, was lying face down and not moving but he could see the Wading River boy's chest moving up and down, indicating he was still breathing. 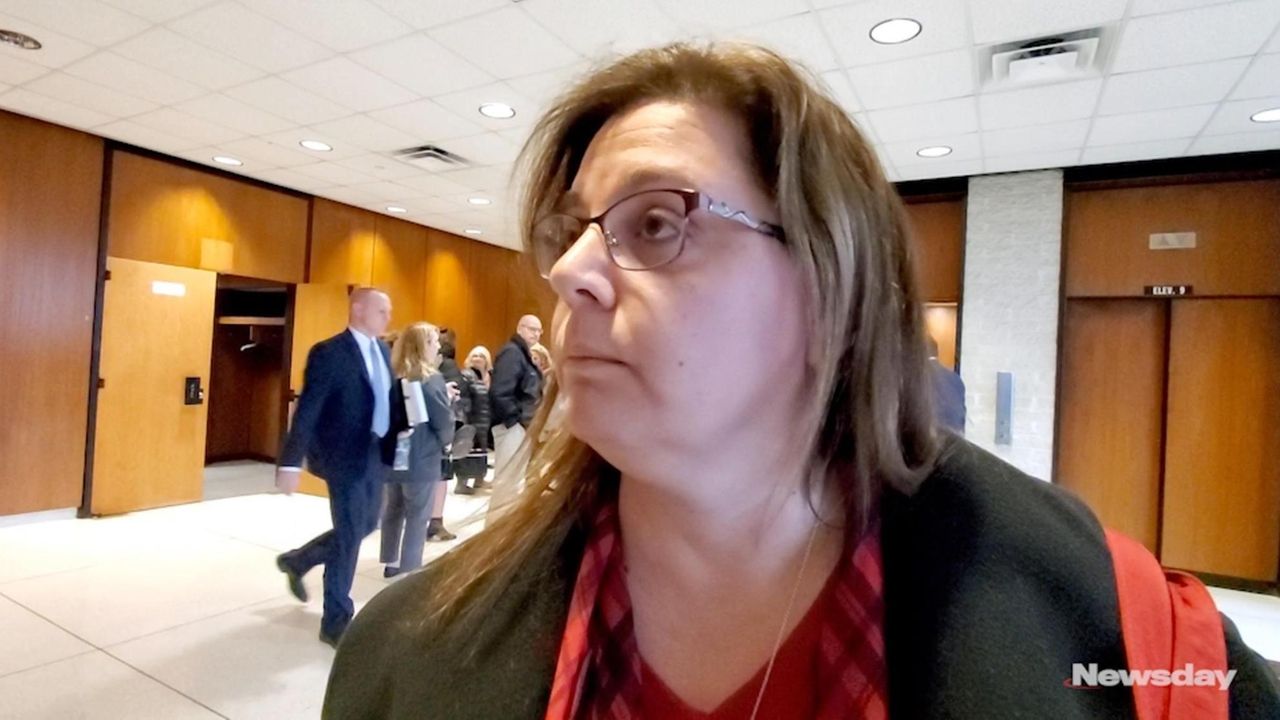 Blunnie, of Shoreham, whose son, Connor, was acting as the hike's navigator on his 14th birthday, said he rushed up about 50 feet to where a crowd of kids had gathered around 15-year-old Thomas Lane, who was severely injured in the crash.

Lane's legs were facing the wrong direction and his right eye socket was so swollen that "it looked like it was going to pop out of his head," said Blunnie, who testified he was the adult closest to the accident when the crash occurred.

Blunnie recalled seeing Murphy, 60, of Holbrook, getting out of his vehicle moments after the crash and saying, "Am I in trouble? Are they all right?"

The father of two said he later approached Murphy and could see that his “eyes were glazed over" and "I could smell alcohol on his breath.”

Blunnie said he later watched Murphy take a field sobriety test administered by police while appearing “unsteady” on his feet.

“It was not going well,” Blunnie said of the “heel to toe” test in which a motorist is asked to walk a straight line.

In his cross-examination, Steven Politi, Murphy's defense attorney, challenged Blunnie’s testimony, noting that he had never told that information to police or to a grand jury investigating the case.

Politi argued that much of Blunnie’s testimony conflicted with what he told the grand jury last year. The attorney said Blunnie made conflicting statements about where he was standing in the line of Scouts, how Murphy’s vehicle had crossed over the roadway and the space between each of the hikers.

Blunnie conceded that while he had instructed the boys to walk just a few feet from one another while in line, he was about 20 feet from the nearest Scout at the time of the crash.

“You were in violation of the rule,” Politi said. “You did not follow the rules that you had laid out.”

Prosecutors contend Murphy spent the morning of the crash downing vodka at the Swan Lake Golf Course in Manorville before driving into Scouts from Troop 161. Along with Thomas Lane, the crash also injured his older brother, Denis, and Kaden Lynch of Calverton.

Politi contends the "poorly supervised" Scouts wandered onto the roadway into the lane of travel, possibly as they walked around a black Jeep that was parked on the shoulder near the crash site.

But multiple witnesses, including Blunnie, have testified that they never saw the Scouts cross the fog line and onto David Terry Road.

Murphy has pleaded not guilty to a 16-count indictment charging him with aggravated vehicular homicide, assault and driving while intoxicated. If convicted, he faces 8 1/3 to 25 years in prison.

Earlier in the morning, the jury heard testimony from Suffolk Police Officer William Sullivan of the department's Crime Scene section, which investigates motor vehicle crashes with injuries or deaths.

Sullivan, who responded to the Manorville crash, said he cataloged nine pieces of evidence, and shot photos and videos of the scene, including damage to Murphy's vehicle. Sullivan also testified he created a diagram recreating the roadway at the time of the crash.

But Politi repeatedly challenged Sullivan for failing to document the location of the parked Jeep and a roughly 20-foot portion of pavement near the crash scene where there was no visible white fog line.

The defense attorney called Sullivan's diagram "inaccurate" and questioned why the officer was called to the scene nearly two hours after the crash. Plainclothes officers and Suffolk detectives had already arrived at the scene before Sullivan's arrival.

The topic of speed also became a flashpoint for the first time.

Blunnie testified that Murphy’s SUV was going a “little bit quicker” than other passing vehicles before the crash.

But prosecutors have not suggested that Murphy was speeding and Judge Fernando Camacho previously excluded any mention of speed at the trial.

Politi pleaded with Camacho to declare a mistrial with prejudice, arguing that prosecutors were aware of Blunnie’s expected testimony.

“This is the very definition of not getting a fair trial,” Politi said.

Camacho rejected the request, citing the extreme nature of declaring a mistrial with prejudice, which would prevent prosecutors from retrying Murphy on the same charges.

Mom of Scout run over: 'His face was the darkest shade of purple'Colleen and Kevin Lane testified about their son's devastating injuries and his monthslong path to recovery after an alleged drunken driver crashed into a group of Boy Scouts in Manorville.