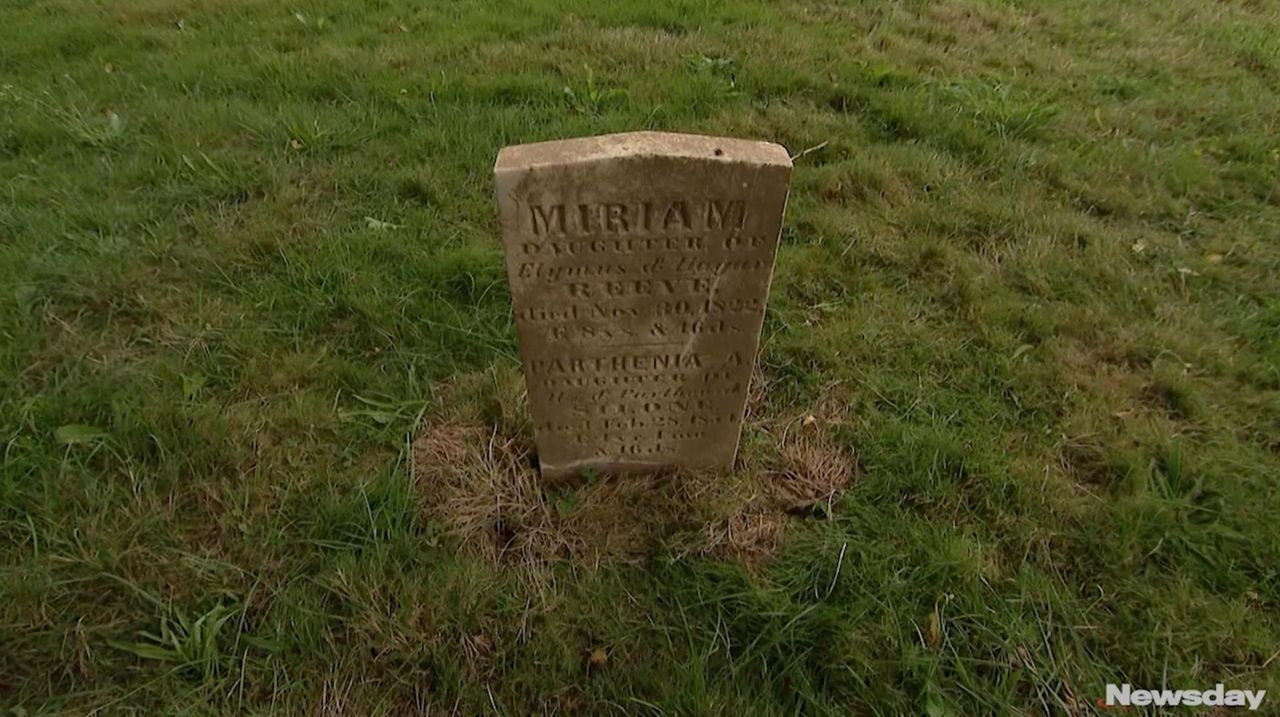 While working on his Eagle Scout restoration project at the Old Cutchogue Burying Ground early in July, 16-year-old Joseph DePinto discovered a headstone for two children who appear to be descendants of slaves. The incoming senior at Mattituck High School enlisted about a dozen friends and family members to help him restore 45 stone posts more than 200 years old that border the burial site. Credit: News 12

When Mattituck High School student Joseph DePinto first considered a request to do a restoration project at Old Cutchogue Burying Ground for his Eagle Scout rank, he thought the idea sounded “creepy.”

Putting his reservations aside, the incoming senior, 16, set off to restore 45 stone posts bordering the site but also happened upon a headstone in the soil containing the names of two children believed to have been descendants of slaves.

“We were digging and we hit something,” said DePinto, who took on the restoration project with the help of about a dozen friends and family members earlier in July. “I didn’t know what it was but I could see it had letters on it.”

After cleaning off the headstone with a wire brush, DePinto said he could make out the engraved names of “Miriam Reeve,” an 8-year-old who died on Nov. 30, 1822, and “Parthenia A. Silone,” a 16-month-old who died on Feb. 28, 1855. The headstone also includes what are believed to be the names of each child’s parents.

The headstone traces back to a former slave, Elymus Reeve, who, according to Amy Folk, the Southold Town historian, was granted his freedom on April 13, 1813. Folk said the freed slave was given 1 acre of land from a previous owner and inherited 3 1/2 acres from his father.

It was not uncommon for smaller headstones from the past to have been covered by dirt during the initial installation of the posts, said Zachary N. Studenroth, director of the Cutchogue-New Suffolk Historical Council, who asked DePinto to do the restoration project and is overseeing the effort.

He said it’s likely the headstone was used as temporary support when crews put up the stone fence in the 19th century and then covered by dirt.

DePinto said he and his group found the headstone three weekends into the task of uprooting and repairing the 200-year-old granite posts that served as borders for the burial ground but over the years had fallen into disrepair.

DePinto and his team have since placed the headstone next to one containing the names of Alexander Silone and Parthenia Reeve-Silone. The pair are believed to have been Parthenia A. Silone’s parents. Historians believe Reeve-Silone was Miriam’s sister.

Elymus Reeve died April 10, 1870, and is buried at the same site, about 20 feet away from his two daughters, Miriam and Parthenia, and his granddaughter, Parthenia A.

“It’s crazy because this is right here in town where I live,” said DePinto, who drives past the burial site almost every day but had never ventured inside. “I didn’t have the historical background to appreciate how important this site is.”

He said if all goes well when his project is completed, he plans to advance to the rank of Eagle Scout later this year. The attention his town is getting, DePinto said, has been the best part of the experience.

“It’s a small town that most people overlook,” said DePinto. “I’m happy I did something that puts Cutchogue on the map,” he said.

CORRECTION: Elymus Reeve was given 1 acre of land from a previous owner and inherited 3 1/2 acres. A previous version of this story listed an incorrect figure.