On Tuesday, attorney Stephen McCarthy Jr. read a statement on behalf of his client, Thomas Murphy, in which Murphy apologized for his actions. Credit: James Carbone

The Holbrook golfer accused of driving drunk into a crowd of  Boy Scouts, killing one of them, was so unsteady on his feet after a morning of drinking vodka on the links that a member of his group offered to drive him home, a Suffolk prosecutor said Tuesday.

Alisa McMorris held a portrait of her dead son, Andrew, 12, in his Scout uniform as she, her husband, John, and dozens of Scouts and family members listened to Assistant District Attorney Jacob DeLauter describe what he said Thomas Murphy, 59, did before his car hit the Scouts. So many people showed up to support the McMorris family and the Scouts that Murphy's arraignment had to be moved to a larger courtroom in Central Islip.

After Murphy pleaded not guilty to the indictment charging him with aggravated vehicular homicide, assault and other crimes, DeLauter told state Supreme Court Justice Fernando Camacho that witnesses reported that Murphy began drinking almost as soon as he arrived at the club about 9 a.m. on Sept. 30.

"He drank a large amount of vodka until he was intoxicated," DeLauter said. A blood sample drawn as a result of search warrant hours later showed a 0.13 percent blood alcohol content, DeLauter said. Forensic toxicologists estimate it was 0.19 percent at the time of the crash — more than double the legal standard of 0.08 percent. 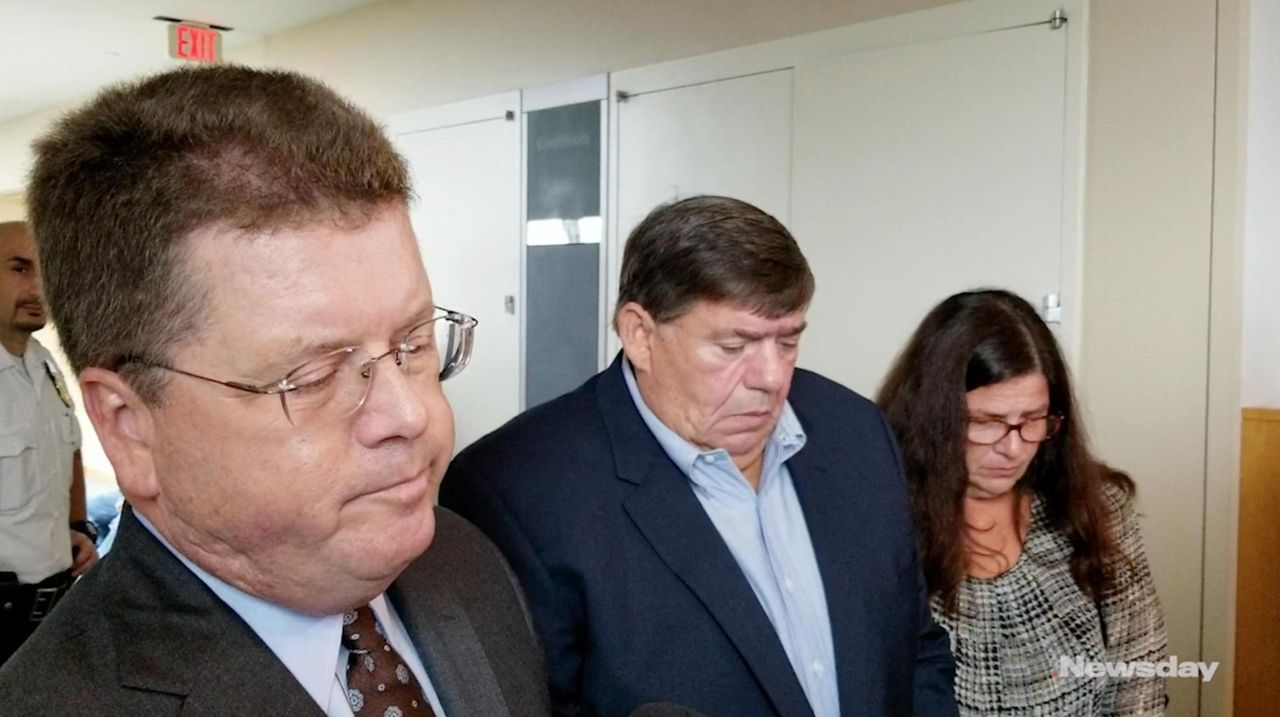 Driver charged in fatal Boy Scout crash releases statement On Thursday, Stephen G. McCarthy Jr., read a statement on behalf of his client, Thomas Murphy, who is accused of driving drunk in a crash that killed Boy Scout Andrew McMorris. Murphy's statement said he was taking responsibility for his "role" in the Sept. 30 crash. Credit: James Carbone; News 12 Long Island

After Murphy's group finished playing at Swan Lake Golf Club in Manorville, DeLauter said one of the men was concerned enough to offer Murphy a ride. But DeLauter said Murphy declined, locked the doors  of his Mercedes-Benz and drove off. Another witness said Murphy's car wandered out of its lane at least once.

A mile and a half from the clubhouse, a group of 18 people, including members of Boy Scout Troop 161 was walking single-file north on David Terry Road, facing traffic on the shoulder of the road, DeLauter said. All were wearing bright red shirts on that sunny morning.

All four tires of Murphy's car were off the road when it plowed into the group, DeLauter said. Andrew McMorris died the next day from his injuries. Another Scout, Thomas Lane, 15, suffered numerous broken bones and remains hospitalized.

Murphy got out of his car right after the crash, and DeLauter said witnesses immediately smelled alcohol on his breath.

"He was too unsteady to safely complete field sobriety tests," DeLauter said.

Camacho allowed Murphy to remain free on bail of $500,000 bond, but ordered him to turn over his passport to prosecutors and suspended Murphy's driver's license.

In a statement read afterward by his attorney, Stephen McCarthy Jr. of Manhattan, Murphy again apologized for his actions and suggested he would not make the victims and their families endure a lengthy legal battle.

"A beautiful, wonderful child lost his life," the statement said. "I can never make that right. ... I know that nothing can fill the void left by the death of your beloved son. I am so very sorry."

He also apologized to Thomas Lane and his family and said he prays he makes a full recovery.

Murphy said it is his "ultimate intention to accept responsibility for my role in this tragic accident" and vowed that the McMorris family's healing would "not be delayed by my court proceeding." McCarthy declined to elaborate on his client's statement.

The top charge in the 16-count indictment carries a maximum penalty of 8⅓ to 25 years in prison.

Family members and Scouts did not comment, but they stood behind District Attorney Timothy Sini at a brief news conference in the courthouse hallway.

"This defendant will be held accountable for his actions," Sini said. "Nothing will bring Andrew back, but we will seek justice." He asked everyone to keep the McMorris family and the Scouts in their thoughts.

"We all need to pull together and be there for them," Sini said.

Records: Driver indicted in fatal Boy Scout crashThe Holbrook man accused of driving drunk into a crowd of Boy Scouts, killing one ... Driver charged in Boy Scout crash: 'I take responsibility'The driver's attorney cautioned that the statement should not be interpreted that he would plead guilty to his current charge of driving while intoxicated or any upgraded charges expected in a coming indictment. Crime in Nassau and Suffolk, 2006-2017 There were 35,503 violent or property crimes recorded on Long Island in 2017 by the state's Division of Criminal Justice Statistics, a 5.7 percent decrease from 2016.