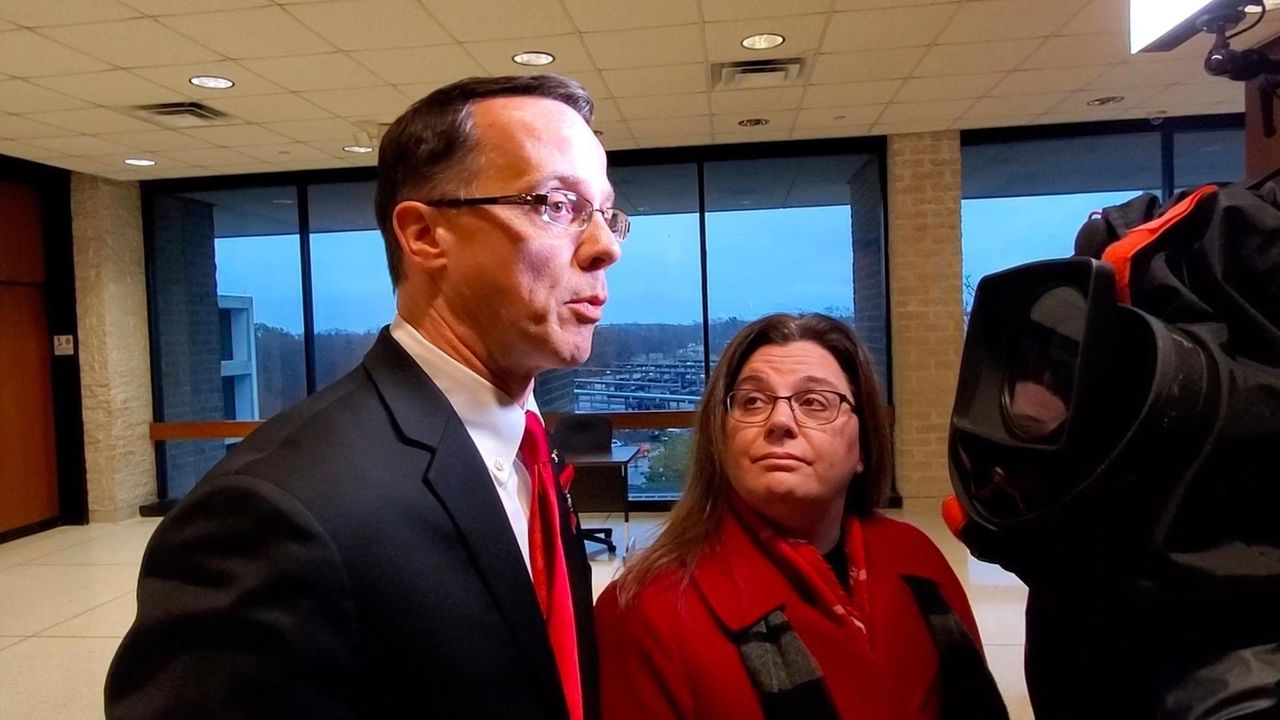 Andrew McMorris's parents speak outside a Riverhead courtroom about the trial of a Holbrook man accused of driving drunk last year and crashing into a group of Boy Scouts in Manorville, killing their son and injuring three others.  Credit: James Carbone

A Riverhead jury began deliberating Tuesday in the trial of a Holbrook man accused of driving drunk on a Manorville road last year, crashing into a group of hiking Boys Scouts and killing a 12-year-old.

Judge Fernando Camacho instructed the jury of seven men and five women to consider nine counts against Thomas Murphy, 60, following the conclusion of the five-week trial.

Four of the nine charges include “lesser included offenses” that allow the jury to consider less serious crimes when considering a verdict if they believe the prosecution failed to prove all elements of the higher charge.

Camacho urged the panel to focus on the evidence and witness testimony presented during trial and avoid reaching a decision based on sympathy.

If convicted on the top count of aggravated vehicular homicide, Murphy faces 8 1/3 to 25 years in prison.

Early Tuesday afternoon, the jury asked for a readback of witness testimony related to injuries sustained by two of the Scouts and Murphy drinking vodka with three friends at the Swan Lake Golf Course in Manorville on the day of the crash.

The panel also asked for photos of the crime scene, a list of the witnesses, and a readback of testimony from the arresting officer and an expert witness for the defense.

Prosecutors contend Murphy got behind the wheel of his white Mercedes SUV — despite an offer from a sober golfing companion to drive him home — on Sept. 30, 2018, before crossing a fog line along David Terry Road and crashing into Scouts from Troop 161. The crash killed Andrew McMorris and injured Thomas Lane, his older brother Dennis Lane and Kaden Lynch.

While Steven Politi, Murphy’s defense attorney, said the “poorly supervised” Scouts wandered onto the roadway where they were struck by the SUV, no witnesses testified they saw the boys in the roadway. Prosecutors insist the children were walking along the roadway's shoulder.

Politi contends his client was not legally intoxicated at the time of the crash and the blood sample was improperly drawn, stored and analyzed, likely allowing for contamination and potentially causing an elevated BAC level.

Alisa McMorris, Andrew’s mother, said she was grateful the trial was coming to an end.

“We trust in the process and we trust in the jury,” McMorris said after the panel began deliberating. “And we believe that justice will be served.”

John McMorris, Andrew’s father, said the crash “didn’t have to happen. Andrew should be alive today. And we didn’t have to be dragged through this entire trial process.”

Politi said he was confident the jury would acquit his client on all charges.

“I don’t believe they have proven their case beyond a reasonable doubt,” Politi told reporters. “I think the jury will agree with me.”

I got my COVID-19 vaccine — what can and can't I do?
Businesses, workers must deal with vaccine etiquette
1:54
Resurrection House homeless shelter could close without county funds
2:24
Sister delivers baby at LI hospital as surrogate for her younger sibling with lung disease
Valva testimony: Ex-cop was 'matter-of-fact' after son's death
St. John's extends Anderson's contract
Didn’t find what you were looking for?