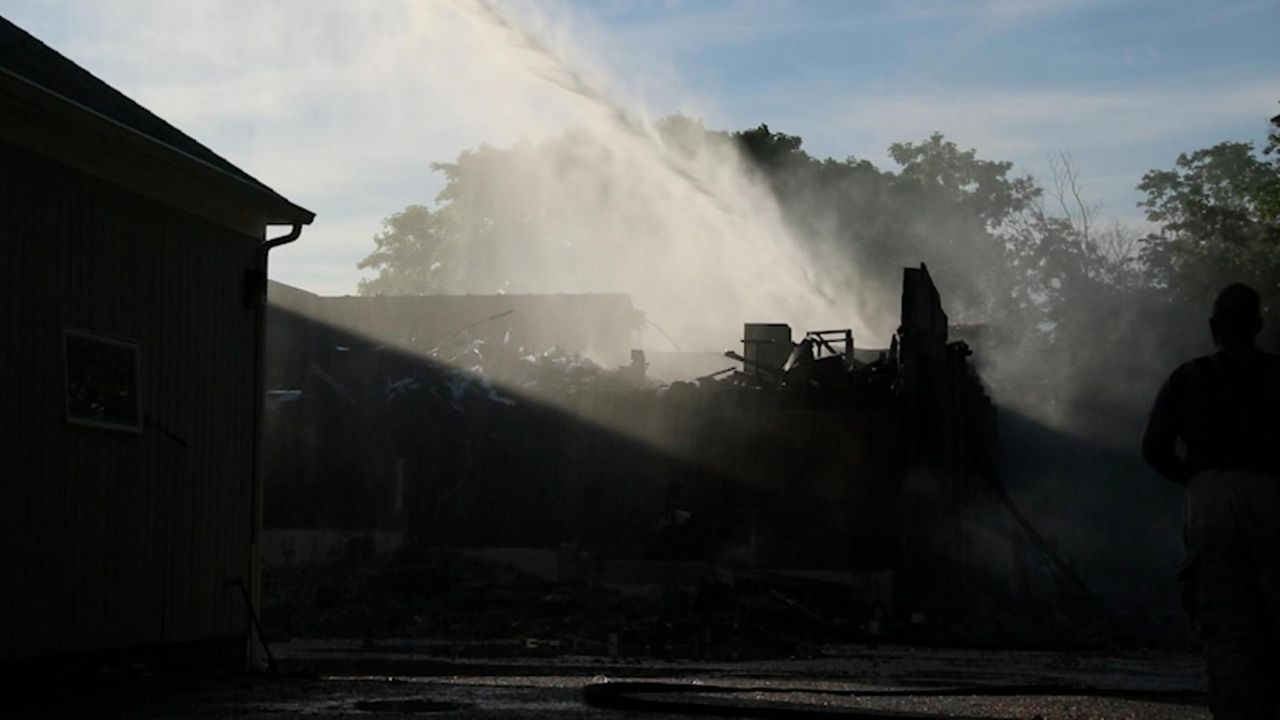 On Wednesday, a major fire erupted at Cutchogue's Braun Seaford Co. shortly after 3 a.m., forcing a section of Route 25 in Southold to be closed in both directions for hours, officials said. Credit: Randee Daddona

A fire early Wednesday inside a Cutchogue seafood wholesaler's storage building led to the destruction of thousands of dollars worth of fish and shellfish and forced the company with roots stretching back generations to temporarily shut down. But the Main Road headquarters for Braun Seafood Co. wasn't closed for long, said Kenneth Homan, the company's president.

Homan said the company's retail shop and takeout restaurant reopened Wednesday at about noon and the wholesale part of the business is expected to be up and running Thursday.

"It was gut-wrenching to say the least," Homan said by telephone. "I had to watch. I was here as fast as anybody and I had to watch the whole thing."

The blaze began shortly after 3 a.m. in a large storage building for boxes, said Chief Tom Shalvey of the Cutchogue Fire Department. It was brought under control by about 6 a.m. by 75 to 100 firefighters from Cutchogue, Mattituck, Southold, Jamesport and East Marion, Shalvey said.

“It didn’t get into the freezer [but] all the product is unusable,” Shalvey said. “The fire was above it, but all the water we poured on top of it went down.”

The scene was cleared by about 8:30 a.m., he said. Two firefighters, treated for heat exhaustion, have recovered.

Homan said hundreds of thousands of dollars worth of fish and shellfish in storage were thrown out. He and others with the wholesaler were still tallying up the losses.

"We are as disheartened as anybody," Homan said. "We condemned everything ourselves."

His father, Jim Homan, bought the company in 1958 from company founder George Braun — keeping the name because he believed it signified quality. Ken Homan eventually took over the operation, an important source of fish and shellfish in the Northeast.

"This is my entire life. I'm staring at in front of me right now, it’s been a lifetime," Homan said. "We're going to rebuild this and be back as fast as humanly possible."

The arson squad has begun analyzing what caused the fire, and a cleaning company was expected to arrive later Wednesday, he said.

"Over 60 people work here during the course of the year," Homan said. "We want to get this going for everybody's benefit, for the community."

Consumers know Braun, founded in 1928, as one of Long Island’s best seafood markets and a North Fork landmark where a lunch of raw clams, fried scallops, grilled swordfish or broiled flounder can be enjoyed at one of the picnic tables looking out at the vineyards of the neighboring winery.

“They are such a generous family. Anytime they can help the community with ice or a refrigerated truck, they’re there all the time for anything," Krupski said. "They’re such good community supporters. It would be really important for the community to step up and do whatever they can for them. They’re more than just a business. … They’re part of the community."

Braun Seafood started out as an oyster-opening shop. After the 1938 hurricane destroyed Mattituck Inlet’s oyster beds, George Braun and Jim Homan, an associate, switched to supplying fishermen with bait.

After buying the company, Jim Homan expanded into growing and marketing Peconic Bay scallops in the 1980s.

Behind the retail counter and kitchen sprawls a wholesale operation dedicated to gathering the bounty of the East End — including swordfish, tuna and more — and selling it to restaurants and seafood markets. Long Island’s commercial fishermen rely on Braun to buy their catch.

As a major distributor, Braun also resells seafood purchased at the Bronx's New Fulton Fish Market and from fisheries all over the country and the globe.

Six months ago, the third generation, Jim Homan, joined Braun Seafood, Homan said. Kenneth Homan's son  had been a part-time employee for nine years, starting at age 14, before obtaining his law degree and practicing in Manhattan.

"He's hardworking and very excited," his father said. "We're going to rebuild and be better than ever."

With Rachelle Blidner and Chau Lam