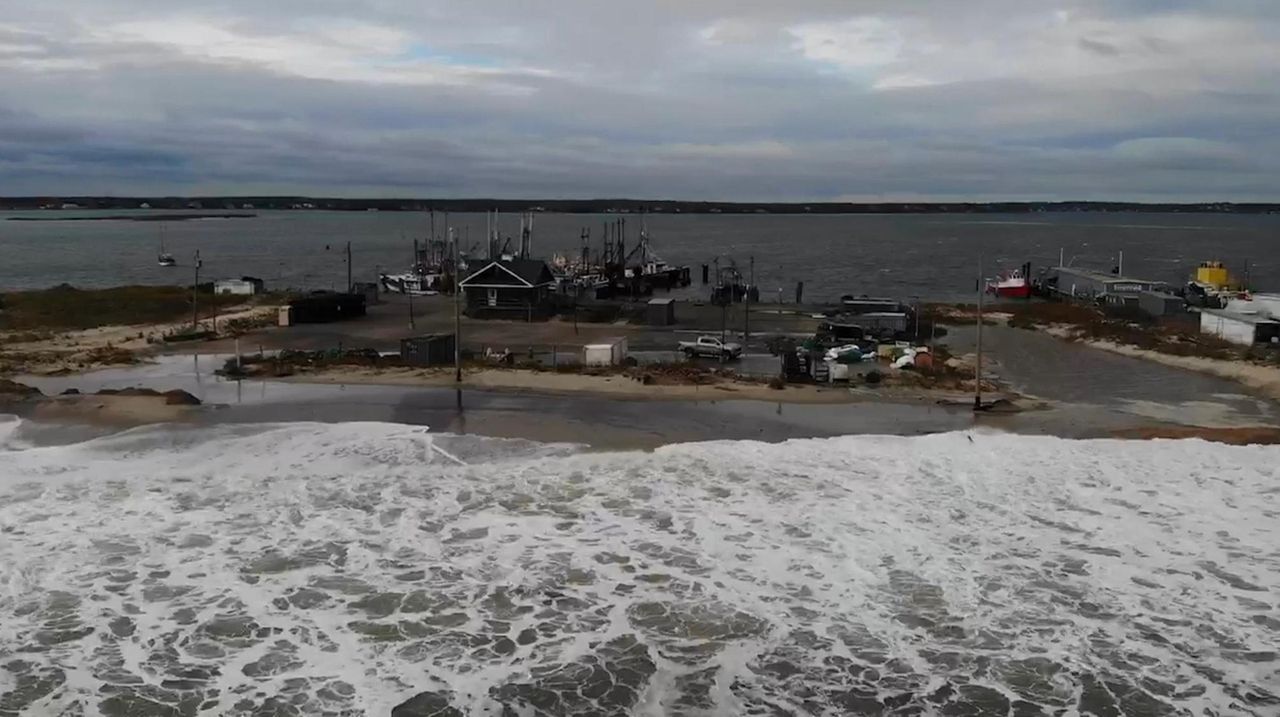 Southampton Town has declared the fourth state of emergency for eastern Dune Road in the past six weeks after another near breach on the barrier island. Credit: Southampton Town Police Department

Southampton Town has declared the fourth state of emergency for eastern Dune Road in the past six weeks after another near breach on the barrier island.

Suffolk County is dredging 90,000 cubic yards of sand to rebuild the dune and beach in Hampton Bays along the strip of roadway connecting the mainland to the Shinnecock Commercial Fishing Dock, the second-largest fishing port in New York State. At high tide around 11:15 a.m. Monday, waves flattened the manmade dune, pushing three-foot high piles of sand into the roadway.

“It opened up a 200-foot-wide area with no protection,” Southampton Town Supervisor Jay Schneiderman said Tuesday. “Waves were rolling right across Dune Road.”

Schneiderman said that some of the recently dredged sand was lost and that the latest near breach underscores the need for a larger federal project to protect the area. The town is requesting the U.S. Army Corps of Engineers bring in an ocean dredge to add 800,000 cubic yards of sand, which officials have said could strengthen the beach for the next two decades.

‘It’s very hard for us to keep doing what we’re doing,” Schneiderman said. “We need a large volume of sand or some sort of engineered solution.”

An Army Corps of Engineers spokesman said the agency has received a request from the state Department of Environmental Conservation requesting flood damages as part of the existing West of Shinnecock Interim Project, which is intended to reduce breaching in the area.

“The Army Corps New York District has requested and received funds from our higher headquarters [in D.C.] to complete a Project Information report to evaluate the effects of these storms, as it relates to the West of Shinnecock Inlet Interim Storm Damage Reduction Project,” he said.

Schneiderman said that once the county dredging is complete, the dune should hold through the winter.

A washover in that area of Dune Road is not unexpected. Jetties along Shinnecock Inlet prevent sand from being deposited on the nearby beach, starving the coast and requiring periodic replenishing. Before October, the area was last overtaken during superstorm Sandy in October 2012.

Kevin McAllister, of the Sag Harbor-based nonprofit Defend H20, suggested the area could benefit from a sand by-passing system, which would periodically pump sand from inlet shoals and east of the jetty to the west to compensate for sand loss. For the long-term, he favors retreating from vulnerable shorefront areas like Dune Road near Shinnecock Bay and the downtown Montauk beachfront.

“I believe it’s untenable in the decades to come that we’ll be able to remain in these areas without major engineering feats,” McAllister said.