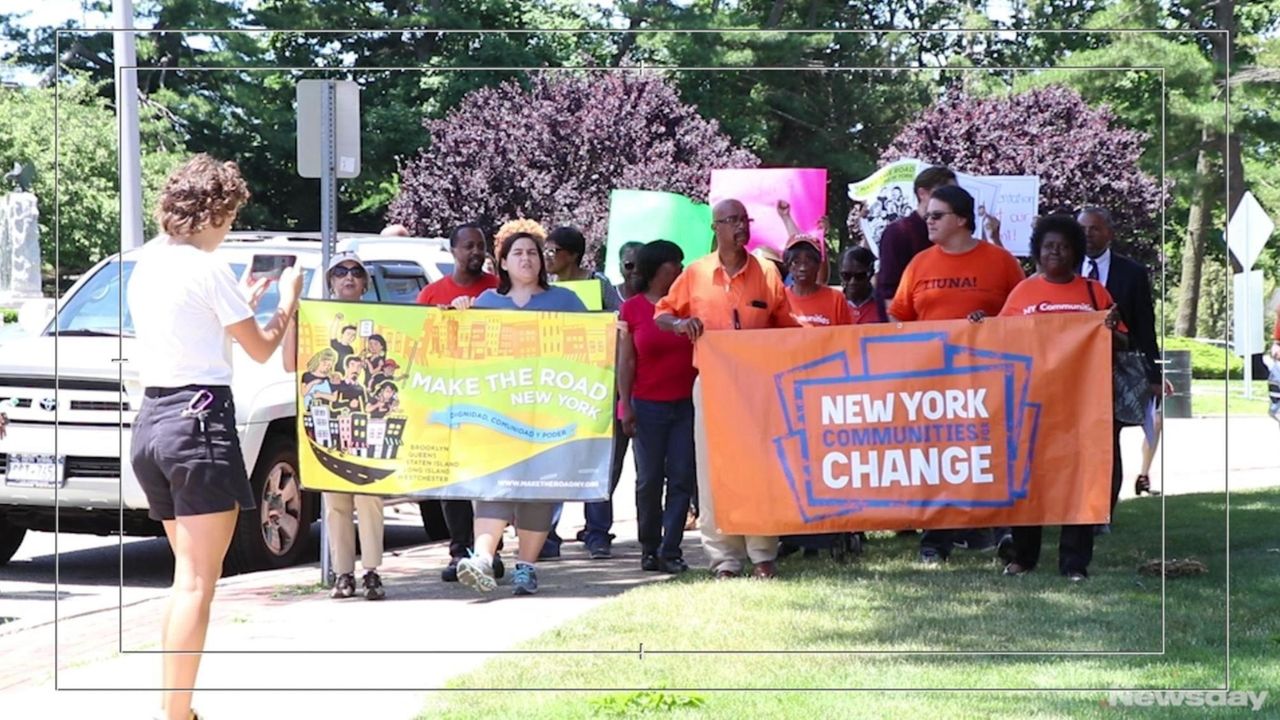 A news conference was held on Tuesday at Islip Town Hall as Latino residents of Islip and advocacy groups announced a federal lawsuit that was filed against the town, claiming it has prevented Latinos from having equal representation in Town Hall. Credit: Jessica Rotkiewicz

A group of Latino residents and advocacy groups is suing Islip Town, claiming the system of electing the town board prevented Latinos from having equal representation in Town Hall.

The town’s at-large elections — in which candidates are chosen townwide by majority vote and do not represent council districts — have allowed the town’s white majority to elect its candidates over those of the minority Latino community, according to the lawsuit.

The election system violates the Voting Rights Act and perpetuates neglect of Latino communities, including Brentwood and Central Islip, according to the suit, which seeks to create council districts.

“Lacking any representation on the Town Board, members of the Town’s Latino community have been demoted to second-class citizens,” according to the suit.

Town voters rejected a ballot measure to create council districts in 2006 after several petitions for a referendum were blocked over a decade.

Town board members declined to comment Tuesday afternoon, with Supervisor Angie Carpenter saying she had not had an opportunity to review the lawsuit.

The town board has never had a Latino member. All five current town board members are white in a town where about 25 percent of the population is Hispanic or black.

The lawsuit was filed in federal district court in Brooklyn on Monday by Brentwood residents Ana Flores, her father, René Flores, María Magdalena Hernández and Magali Roman, and advocacy groups Make the Road New York and New York Communities for Change. Defendants include the Islip Town Board and the Suffolk County Board of Elections.

“I feel like there’s a lot of hatred,” said Flores, who will begin a master’s program in social work at New York University in the fall. “We kind of lost hope in our government, and, at some point, some of us even fear it.”

Town officials have largely ignored the concerns of residents in majority-Latino areas, from quality-of-life issues such as potholes needing fixing to the violence of the MS-13 gang, according to the suit. Town services such as street cleaning and trash pickup are provided more frequently in more white and affluent areas, the suit said.

The community’s neglect was especially apparent when 40,000 tons of contaminated debris were dumped at Roberto Clemente Park in Brentwood in 2013 and 2014, the suit said. Two town parks officials were convicted for their roles in the illegal dumping, as were three other men.

It took three years to clean up and reopen the park, and the pool is still under construction despite an estimated reopening for summer 2018.

“We were reminded once again through that incident of the deep bias and discontent and lack of accountability for the Town of Islip board to the majority-Latino population in Brentwood, Central Islip and North Bay Shore,” said Walter Barrientos, Make the Road’s organizing director for Long Island.

Board of Elections clerk Mary Lou said she did not know about the lawsuit because “we have not been served with anything.”

The only Long Island towns with council districts are Hempstead, North Hempstead and Brookhaven, according to both the Nassau and Suffolk Board of Elections.

About 40 people marched and chanted, “Islip is for all; our vote counts,” during a rally outside Town Hall on Tuesday.

Town officials “are not interested” in serving Spanish speakers like her, said plaintiff Magdalena Hernández, noting that they did not provide a translator during a 2014 meeting discussing the illegal dumping at Roberto Clemente Park.

“This would not be happening if we had board representatives who come from our community who would not be so oblivious or indifferent to the needs of Spanish speakers,” she said in Spanish.

Hernandez asked for a translator when she went to address the town board about feeling abandoned at a post-rally meeting. Although Carpenter told her that residents “generally need to request it ahead of time,” a Spanish-speaking town employee assisted Hernandez.

Fred Brewington, an attorney on the three-firm legal team representing the plaintiffs, filed a similar lawsuit against Hempstead Town that led to the creation of council districts in 2000 after a federal judge found the town’s at-large elections violated the Voting Rights Act by diluting minority votes.

The rally about “quelling and suppressing the votes of Latino voters and black and brown voters” was held on Tuesday partly in recognition of Juneteenth, a holiday commemorating the day many slaves learned they were freed by the Emancipation Proclamation, Brewington said.