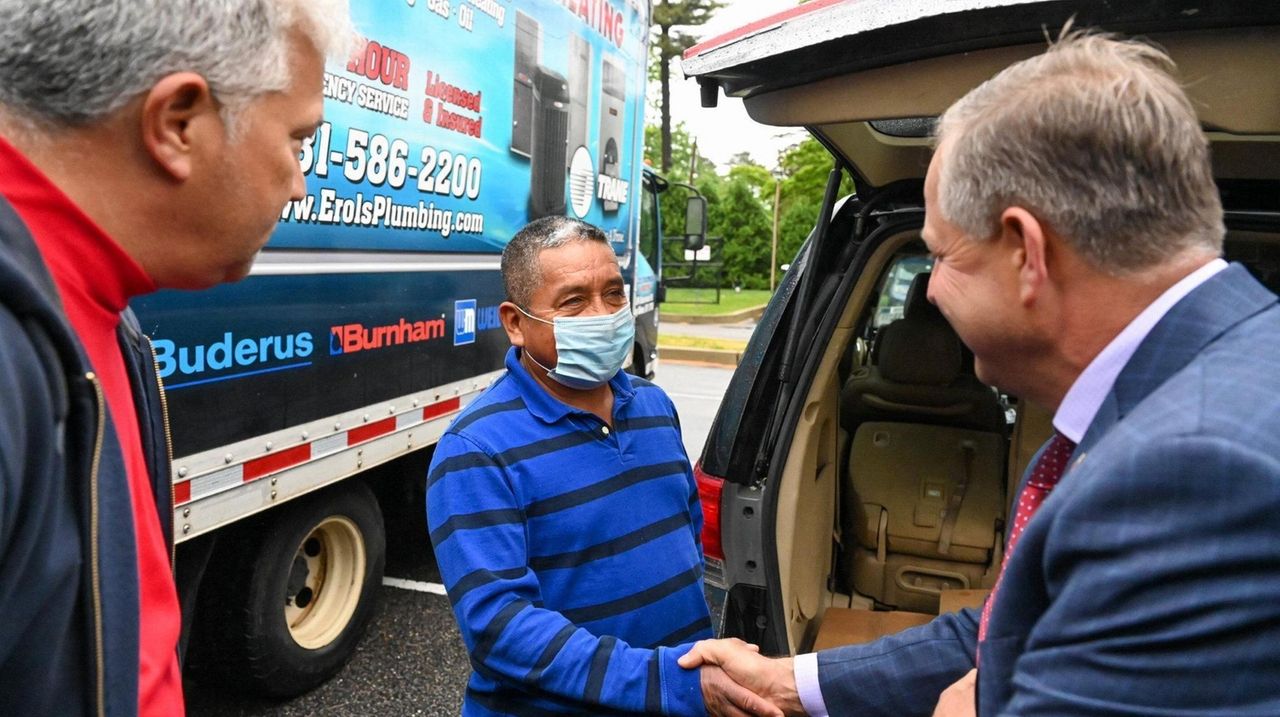 After a hate crime was inflicted on the Islamic Center of Suffolk County in Brentwood, members of the community came together on Sunday in a show of support. Newsday's Chelsea Irizarry reports. Credit: James Carbone, Chelsea Irizarry

Several community groups came together Sunday to show support for members of a Brentwood mosque vandalized earlier this month, and used its parking lot to coordinate food donations for neighbors in need.

Leaders of those organizations also pledged to donate funds to help replace the sacred prayer flag burned at the Islamic Center of Suffolk County, fix the fence cut by the vandals and update the center's security system.

The Suffolk County Police Department's Hate Crimes Unit and Arson Section is investigating the vandalism and destruction of property, which took place around 2 a.m. on May 17, as a possible hate crime.

"It’s important for us to show support for the community," said Thomas Joy, a Suffolk County police officer and president of American Malayalee Law Enforcement United, a fraternal organization. "It is a very traumatic event when a place of worship … is violated in such a way."

He joined members of the Suffolk County Police Asian Jade Society, the New York Turkish American Center and local nonprofits Pronto and Jafria Association of North America to help distribute literature about hate crimes and unload 60 boxes packed with food outside the mosque on Sunday.

The burned prayer flag had been removed but the remnants of pro-Trump graffiti were still visible at the base of the flagpole.

"Everyone was shocked when this happened," said Sunny Naqvi, a volunteer and member of the mosque.

Naqvi said the mosque had security cameras operating the night of the vandalism but they were not able to capture clear images of the people responsible for the destruction.

The donated boxes of food were provided by the New York Turkish American Center. "We are against the hate," said Erol Akyurek, president of the center. "That is why we are here."

Volunteers helped move the boxes into a van operated by Pronto, which will distribute them to people in the community.

One of the recipients, Carlos Torres of Brentwood, a father of 12-year-old triplets, was on hand to pick up a box.

"He is extremely grateful," said Marc Soto, executive director of Pronto, translating for Torres, who spoke in Spanish. "His wife suffered from cancer and as a result, she was unable to work and he was the only provider in the home."

Joy appealed to parents on Long Island to speak with their children about tolerance, love and respect for all races, religions and cultures.

"We are not born with hate," he said. "We learn the behavior and we learn it through adults."