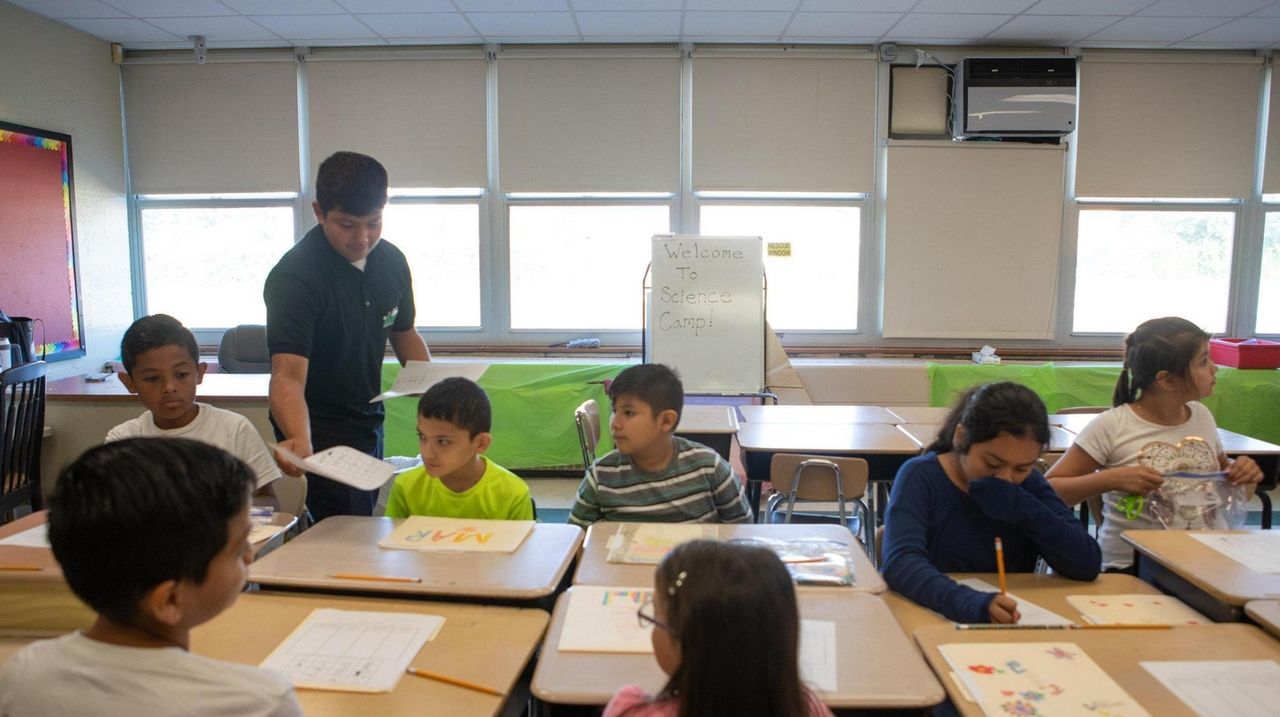 Christian Gonzalez sees himself in the eyes of students he is mentoring at Brentwood’s North Elementary School.

“It felt really nostalgic to come to these type of schools and help children like me,” said Gonzalez, 15, an incoming junior at Brentwood High School who is taking part in My Brother’s Keeper, an after-school program aimed at boosting academic performance and providing new life experiences for minority and low-income boys. “To them, I’m a bigger person. They see me as a responsible figure. It feels amazing.”

Gonzalez on Tuesday, sporting a black polo-style shirt — emblazoned with the letters “MBK” — assisted a classroom of summer-school students who were learning a science lesson about energy.

The My Brother’s Keeper program in Brentwood will enter its third school year this fall. Officials at the Brentwood Union Free School District are planning to expand the program to include middle school students while adding its first class of high school seniors. Plans to grow are in the works despite the district having depleted most of its $300,000 grant from the New York State Department of Education awarded in 2016, said Monique Darrisaw-Akil, assistant superintendent for secondary education, who oversees the program. Although the program mostly serves minority and low-income students, anyone interested can participate, Darrisaw-Akil said.

In its first two school years, about 80 teens participated in opportunities such as SAT preparation and visiting college campuses in New York, Philadelphia and Washington, D.C. The students also sat in on seminars about the job market, where they were taught how to build a resume and find a suitable career, Darrisaw-Akil said.

“They will always remember that they were part of this program, part of this brotherhood,” she said. “They will remember there were adults who invested in them, and cared enough about them, and saw something in them that maybe wasn’t recognized elsewhere.”

In addition to trips to campuses and academic college preparation, the $300,000 grant helped pay four teachers and an assistant principal to serve as the students’ advisers. The advisers were in weekly contact with the boys and made sure they were doing well academically and socially, Darrisaw-Akil said.

“The kids are the ones who make you want to work hard to find the money,” she said. “I’m very confident we will get the funding.”

My Brother’s Keeper stemmed from a nationwide initiative by President Barack Obama in 2014 to address the challenges facing boys and young men of color.

The program in Brentwood includes a partnership with Stony Brook University School of Health Technology Management and the nonprofit Youth Enrichment Services.

Ezequiel Diaz, 15, an incoming sophomore at Brentwood High School, said the program has helped him make friends and view life differently. He hopes to one day be a police officer.

“It shows us how to go to college and stay in college,” Diaz said. “I wasn’t thinking about college, but now I am.”