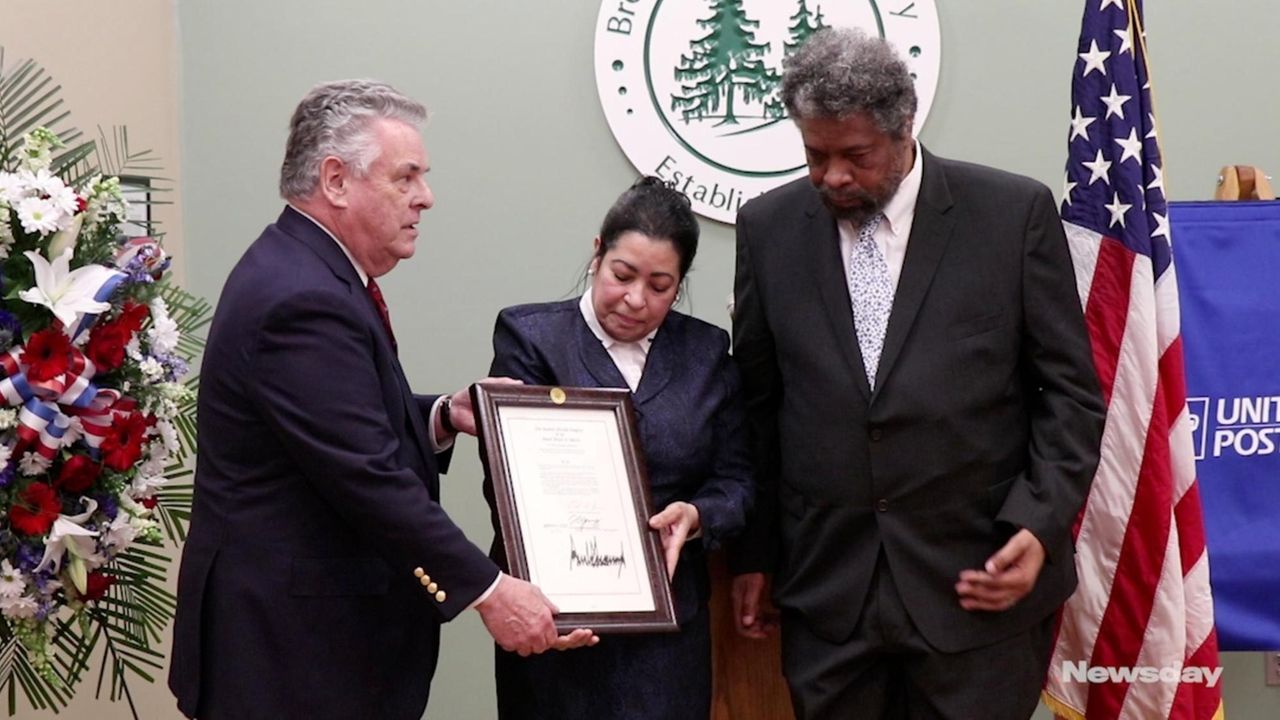 The Brentwood Post Office was renamed after Army Specialist Jose L. Ruiz during a ceremony on Monday. Ruiz was killed in 2005 while serving in Iraq. Credit: Jessica Rotkiewicz

Jose Ruiz was a 25-year-old computer network engineer with a promising future when he watched terrorists shake America to its core on that clear Tuesday morning in September of 2001.

Ruiz, of Brentwood, heard the call of service and enlisted in the Army. He went on to become specialist and a member of the elite Stryker Combat Brigade, where his heroism on the battlefield earned him nine medals, include the Bronze Star and the Purple Heart.

But on Aug. 15, 2005, two weeks before he was set to come home from Iraq — and eight months after meeting his infant daughter Liana for the only time — Ruiz died in a gun battle in Mosul.

Nearly 14 years later, Ruiz's legacy of bravery and selflessness will live on in his community as the Brentwood Post Office was renamed in his memory.

"This is something that we will never forget as long as we live," Ruiz's stepfather, Eduardo King, said during a ceremony Monday in Brentwood. "To you guys, my son is a hero. But to my family, he is a prince."

Post offices renamings are not uncommon — about 82 occur annually according to the Congressional Research Service — but cutting through the red tape can be time-consuming, officials said. The honor requires the unanimity of a state’s congressional delegation in the House and Senate.

Rep. Peter King (R-Seaford), who sponsored the legislation renaming the Brentwood Post Office on Second Avenue for Ruiz, said lawmakers on either side of the aisle rarely agree on much but all supported the designation. President Donald Trump signed the legislation in December.

"This was a coordinated, united effort," King said Monday. "But if anyone deserved that effort it was Specialist Ruiz."

Democratic Senate Minority Leader Chuck Schumer said in a statement that the renaming was "a fitting tribute to honor Specialist Ruiz’s memory and service to his country.”

Ruiz's mother, Juliana King, said the 14-year wait to secure the renaming was worth it so that Liana would have a special honor for the father she never knew.

"It took a long time but the results are here today," Juliana King said. "We wanted to do everything we could to leave [Liana, now 14] with something to hold on to. She's been suffering a lot."

The Kings also formed a nonprofit, the Light One's Heart Foundation, in Ruiz's memory. The foundation, Eduardo King said, donates about 1,250 pounds of food to the poor and needy in Brentwood weekly.

Ruiz was born in Queens, the eldest of four siblings. He was raised in Brooklyn and his family later moved to Brentwood. His stepfather recalled Jose's audacious and contagious laughter and smile that made him popular with teenage girls. "The girls were crazy about him," he said.

After graduating from Brentwood High School and the New York Institute of Technology, Ruiz became a computer network engineer. He appeared to be on his way to a successful career in the private sector but the Sept. 11 attacks changed the course of Ruiz's life, sending him on a path of public service.

On Christmas 2004, Ruiz would return to Brentwood one last time to see his wife, Alexa, and meet his newborn daughter.

As he held the child in his arms, Ruiz refused to let go, telling his father that two of his Army brothers had died in battle only months earlier. They too were expecting children at the time of their deaths.

"He said, 'Dad, I am holding my baby now for both of my buddies because they didn't have a chance to hold their babies," stepfather Eduardo Ruiz recalled. "This was the kind of man he was."