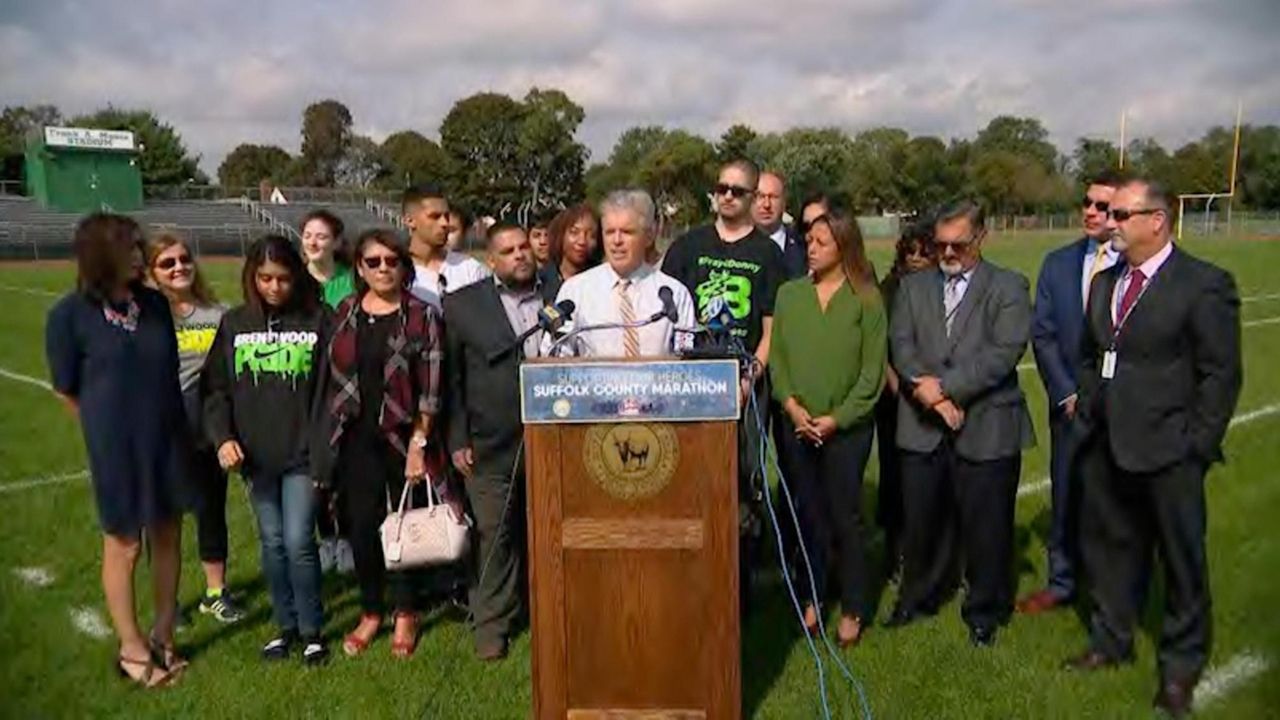 Walk or run, Donovan Maldonado is a young man on the move.

On Thursday, the 6-foot-2 Brentwood High School junior was gearing up to take part in a 5-kilometer race in Patchogue later this month.

Just two years ago, he and his family weren’t sure he would ever walk again.

Donovan, 16, was struck by a car in Brentwood in January 2016 on the way home from school. He suffered serious internal bleeding, traumatic brain injury, a ruptured spleen and broken bones, and spent several months in a coma.

Now, as part of his recovery, Donovan has challenged himself to participate in the 2018 Catholic Health Services Suffolk County Marathon’s 5-kilometer race on Oct. 28. He will use the high school’s track as his training ground.

Donovan surprised onlookers and even his parents, Laura Garces and Matthew Maldonado, as he ran around the entire track at the school’s football field.

“I thought he was going to walk it,” his mother joked once he finished. “But he ran.”

Donovan’s lap Thursday was among the many steps he has taken toward independent living since his accident.

He has undergone several surgeries and will require lifetime rehabilitation. He receives occupational, speech and physical therapy, his parents said. They started a GoFundMe campaign to offset the expenses for his medical treatment since much of it is not covered by insurance, they said. He still has tremors often and has difficultly staying on topic when speaking, they said.

“Donovan has had to relearn many of the things most people take for granted: how to walk, talk, use the bathroom,” said Laura Garces, 39.

But with faith, family and friends, Donovan is thriving, his parents said. He is a full-time student again and has blossomed from a shy teen to a confident young man.

“He was a lot more quiet and to himself before the accident,” said his brother Tavian Maldonado, 19. “Now, he’s more vibrant. When he starts a conversation, he holds the conversation.”

He has served as an inspiration for members of the Brentwood community.

“His determination has never wavered,” said Rich Loeschner, Brentwood superintendent. “He has never used the accident as a crutch.”

Loeschner plans to cheer for Donovan from the sidelines at this month’s race. He said the teen’s recovery is a demonstration on how love and faith can overcome obstacles.

“He has helped me to re-evaluate how I look at my life,” Loeschner said.

Matthew Gengler, principal of Brentwood North Middle School, which Donovan attended when he was injured, commended him for his determination.

“It is amazing in Brentwood that in some of the darkest hours, we can see the light,” Gengler said.

As Donovan stood on the track Thursday wearing a T-shirt that read “#Pray4Donny,” he pledged that — walk or run — he will finish this month’s race.