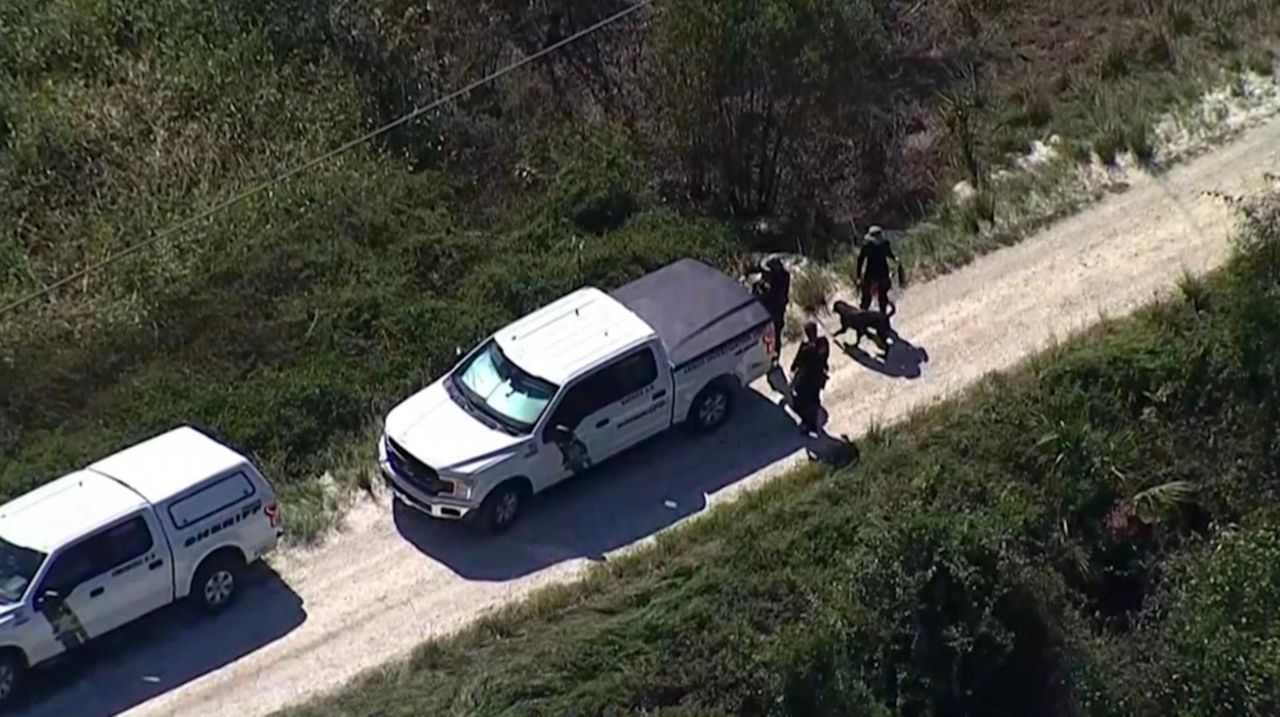 The FBI said apparent human remains were found in Florida in an area where two items belonging to Brian Laundrie were also found. The remains have not yet been identified. Newsday's Cecilia Dowd reports. Credit: James Carbone; WZVN; Utah police; WFTS-TV

Authorities found apparent human remains in a Florida reserve along with a backpack and notebook belonging to Brian Laundrie, the "person of interest" in the strangulation death of his former fiancee and Blue Point native Gabrielle Petito, the FBI said Wednesday.

The apparent human remains, as well as Laundrie's backpack and notebook, were found in an area of the reserve that had until recently been under water, said Michael McPherson, the special agent in charge of the FBI’s Tampa field office during a media briefing Wednesday.

Authorities on Wednesday found apparent human remains, in a Florida reserve, belonging to Brian Laundrie, who the FBI said is a “person of interest” in the death of former fiancee Gabrielle Petito.

A backpack and a notebook belonging to Laundrie also were found in the area, which had until recently been under water, officials said.

Laundrie’s parents were at the reserve when the apparent remains and their son’s possessions were located, Laundrie family attorney Steven Bertolino said in a statement.

"Earlier today, investigators found what appeared to be human remains along with personal items such as a backpack and notebook belonging to Brian Laundrie," said McPherson. "These items were found in an area that up until recently had been under water. Our evidence response team is on scene using all available forensic resources to process the area. It’s likely the team will be on scene for several days."

The Sarasota County, Florida, medical examiner was called to the scene by law enforcement after the findings, the office confirmed.

Laundrie had told his parents he was going hiking at the reserve on Sept. 13, but he never returned home. His Ford Mustang was later found at the park's entrance.

"The parents are very distraught about this news," said Laundrie attorney Steven Bertolino, of East Islip. "I think it would be best to say that they are quite distraught. While today's discovery was not unthought of, it is still hard to accept."

Laundrie's parents were at the reserve when the apparent human remains were found after what Bertolino called a "brief search off a trail that Brian frequented."

"Chris and Roberta Laundrie were at the reserve earlier today when human remains and some of Brian's possessions were located in an area where they had initially advised law enforcement that Brian may be," Bertolino said. "Chris and Roberta will wait for the forensic identification of the human remains before making any additional comments."

Bertolino said the parents entered the park around 7 a.m. Wednesday with a North Port police officer and an FBI agent following behind them and about 30 to 45 minutes after walking, Laundrie’s father found a white bag with some of Brian’s personal effects in bramble off a trail that Laundrie was known to frequent.

"Within a few moments of that, another law enforcement officer came out of the woods with a photo of the backpack on his phone and Chris and Roberta identified the backpack as Brian’s and at that point it was determined that an investigative scene would have to be established."

Bertolino added: "Obviously you can imagine it was disheartening. And it’s very sad for them."

Bertolino said authorities did not provide information on the condition of the remains.

Bertolino also said the FBI has not provided the family an estimate on when it will be able to identify the remains. But Bertolino said the agency already has a sample of Laundrie's DNA and his dental records, which can be used to positively identify remains.

Petito, 22, a Blue Point native, was found dead in a Wyoming national forest on Sept. 19 — eight days after her mother reported her missing to Suffolk police after she stopped communicating with her family by phone while she was supposed to be on a cross-country trip with Laundrie.

A Wyoming coroner has said Petito’s death was a homicide and she died by manual strangulation about three to four weeks before her body was found.

Petito and Laundrie, both graduates of Bayport-Blue Point High School, had left Long Island in July on the road trip, which they documented on social media.

On Aug. 12, Petito and Laundrie got in a physical altercation that was investigated by Utah police, but no charges were filed.

Laundrie returned home to Florida on Sept. 1 from the trip alone in Petito’s van and refused to talk to authorities about her whereabouts. Laundrie told his parents he was going hiking on Sept. 13 but never returned home. The parents said he left his cellphone and wallet at home.

Authorities have been searching the nearly 25,000-square-acre reserve using police dive teams, police dogs and drones since after his parents reported him missing. The FBI had twice retrieved some of Laundrie's items from the family home to assist police dogs in the search.

Laundrie is wanted on a federal arrest warrant for alleged bank card fraud that the Petito family attorney said is related to Laundrie stealing Petito's debit card after her death.

Bertolino said the FBI and the North Port Police Department were informed Tuesday night that Laundrie's parents intended to search the area for their son, and met investigators there Wednesday morning.

Earlier this month, Laundrie's father had accompanied law enforcement on the search of the reserve, pointing out trails and places where the father and son had hiked previously.

"Chris and Roberta Laundrie went to the Myakkahatchee Creek Environmental Park this morning to search for Brian," Bertolino said in a text message before the FBI announced it had found what appears to be human remains. "The FBI and NPPD were informed last night of Brian’s parents’ intentions and they met Chris and Roberta there this morning. After a brief search off a trail that Brian frequented some articles belonging to Brian were found."