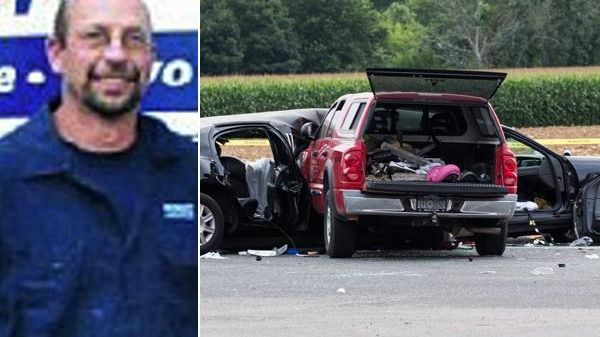 Steven Romeo, who was driving a truck Saturday night that hit a limo and killed 4 women in Cutchogue, was arraigned on Sunday, July 19, 2015 at his Eastern Long Island Hospital bedside. Romeo was ordered held on $500,000 bail and pleaded not guilty to a misdemeanor driving while intoxicated charge. (Credit: Stringer News Service)

The four young women killed Saturday when an alleged drunken driver plowed his pickup truck into the limousine they had hired for a celebratory day in the North Fork wine country all called the town of Smithtown home.

The limo passengers were "a group of women out celebrating an upcoming event," Assistant Suffolk County District Attorney Elizabeth Miller said Sunday. "There was a bride" and she survived the wreck, Miller said. Friends and family of some of the women said the gathering was not a wedding celebration. Officials with the limousine company said the car was hired for a birthday.

Miller spoke after the arraignment of pickup truck driver Steven Romeo, 55, of Southold at Eastern Long Island Hospital in Greenport, where he was admitted after the wreck. Romeo was charged with DWI, a misdemeanor, but ordered held on $500,000 cash bail or $1 million bond. He pleaded not guilty Sunday.

Romeo, co-owner of Romeo Dimon Marine Service in Southold, is scheduled to appear in Southold Town Court on Friday. Miller did not disclose his blood-alcohol level or where he was before the crash.

Family and friends on Sunday described the four women killed as vibrant and accomplished.

Lauren Baruch, 24, of Smithtown, was "unafraid to be the only one on the dance floor." Brittney Schulman, 23, of Smithtown graduated from SUNY Cortland last year and wanted to work in public relations in the fashion industry.

Police identified their four friends who survived the crash as Joelle M. Dimonte, 25, of Elwood; Alicia Arundel, 24, of Setauket; Olga Lipets, 24, of Brooklyn, and Melissa Angela Crai, 23, of Scarsdale.

The limo picked up the women at Baruch's home, her father said Sunday. Some of their cars remained at the home, Steven Baruch said.

Witnesses on Saturday said Romeo was seen sitting in the back of the pickup right after the wreck, but police said he ran from the crash scene.

Romeo's attorney, Dan O'Brien, offered condolences to the victims and said his client did not leave the scene of the wreck. Miller did not address whether Romeo had fled. "It's a tough situation," said O'Brien, who is based in Nesconset.

Neither Romeo, who remained hospitalized, nor his business partner Kris Dimon could be reached for comment. Their marine services business was closed Sunday, and the answering system message was changed midday to remove Romeo's cellphone number.

Also injured in the crash was limo driver Carlos Pino, 58, of Bethpage, who works for Ultimate Class Limousine in Hicksville. Pino has not been charged with any crime.

In a statement, company officials called the crash "a tragic accident on what should have been a happy day for a group of young women. We pray for the victims and for the families as they go though this unimaginable time."

"We are in direct contact with all authorities and we are providing all information that they have requested for their investigation," Ultimate Class Limousine officials said in the statement.

One of the last stops the limo took the women to was Vineyard 48, located on the south side of Route 48, just west of Depot Lane. The limo was trying to make a U-turn on Depot when Romeo's pickup broadsided its right side, officials said.

Dimonte had surgery at Peconic Bay Medical Center Sunday and is in stable condition, according to Samantha Vigliotta, vice president of the center's foundation and external affairs. Arundel and Lipets were in fair condition at Stony Brook University Hospital Sunday night, according to spokesman Greg Filiano.

Lipets' grandmother in Brooklyn, Lyubov Drurer, said Lipets was in surgery at Stony Brook Sunday. Lipets' mother, father, uncle, aunt, and boyfriend were by her side, Drurer said.

The crash was the second multifatal wreck on Long Island in a week. Three members of a Queens family -- the father and two young children -- died July 12 when their car was rear-ended by an alleged drunken driver on the Southern State Parkway at the exit for Robert Moses Causeway.

The Cutchogue intersection where the limousine crash occurred has long been a worry to residents because of the convergence of vineyard-bound limousines making U-turns amid oncoming traffic on the rural road. It was not known if the limo cut in front of the truck, Southold Police Chief Martin Flatley said Saturday night.

"He [the pickup truck driver] hit the brakes right before and he broadsided the limo right on the passenger side," he said.

Flower bouquets had been placed in the roadway median at the crash site Sunday.

William Rule, 64, was among those dropping off bouquets. He had picked lilies from his garden in Riverhead, he said.

He said he did not know the victims but felt the tragedy was "so horrific" he needed to contribute to the growing memorial.

"This traditionally had been a quiet area, not very busy," he said of the North Fork's vineyard region, but noted it has become "built up and more of an attraction."

Editorial: Limo tragedy shows we need to get seriousHow many more got away with it?