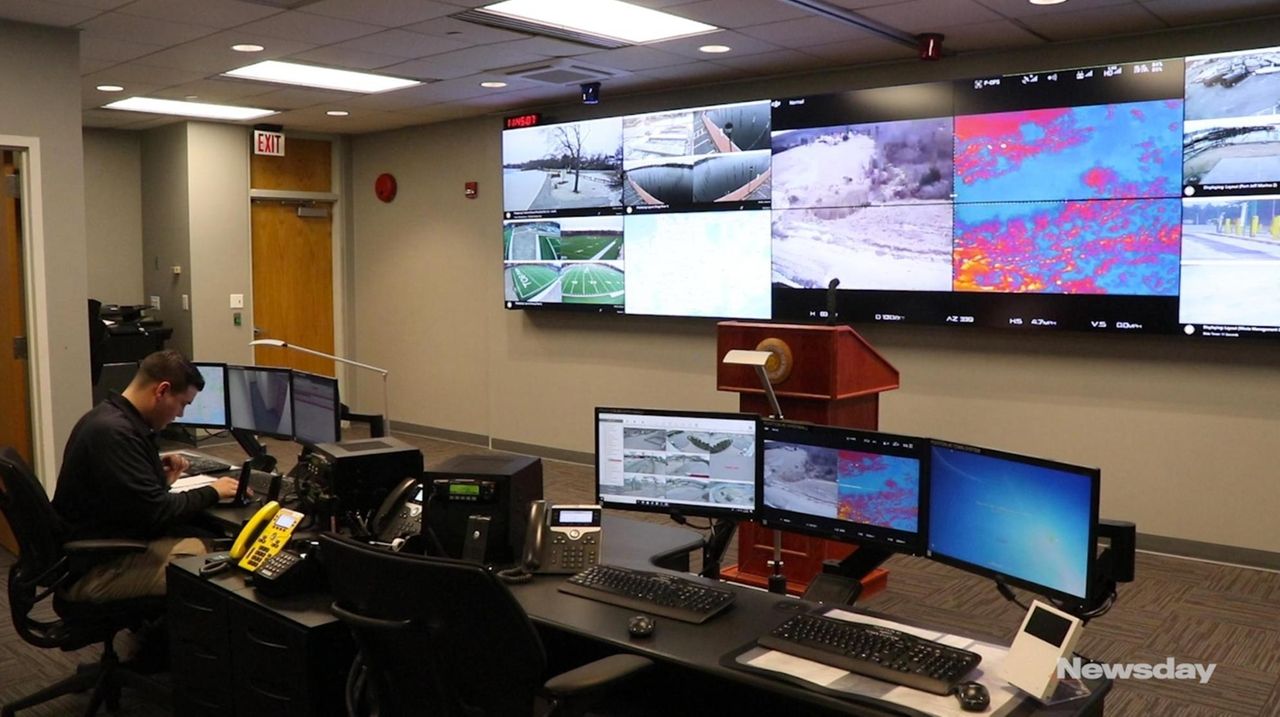 At a news conference on Wednesday, Brookhaven officials unveiled an $8 million public safety communications center that includes placement of 353 cameras at town parks and senior centers and a pair of drone cameras to help officials track everything from graffiti scrawled in public places to snow plows clearing roads. Credit: Jessica Rotkiewicz

Brookhaven officials on Wednesday unveiled a nearly $1 million public safety communications center that they said is the biggest and most sophisticated facility of its kind on Long Island.

The system, including 353 cameras at town parks and senior centers and a pair of drone cameras, will help officials track of everything from graffiti scrawled in public places to snow plows clearing roads, town officials said during a news conference in the center's dispatch room on the third floor of Brookhaven Town Hall.

"This is a long time coming," Supervisor Edward P. Romaine said. "It also gives us a system to watch things happening in real time. It also offers us a sense of protection and lets people know that if you're going to mess with town property, eyes are on you."

Town officials said they began planning the facility about six years ago, after superstorm Sandy in October 2012 exposed gaps in communications between the town and other municipalities and agencies.

The new facility makes it easier for town public safety officials and dispatchers to communicate with fire and ambulance departments and with state and county emergency officials, Romaine said, adding that a dedicated radio band would allow snow plowing crews dispatched from upstate communities to correspond with Brookhaven.

Lee Mandel, chief executive of Massapequa-based IntraLogic Solutions, which designed and installed the system, said it was the most state-of-the-art communications system the company has built. The firm has designed communications systems for about 200 municipalities statewide, including facilities for Babylon and Huntington towns, he said.

Brookhaven's system is the first to use a communications compression system that transmits surveillance video in real time, rather than in the choppy series of images typical of security cameras, Mandel said.

The town hall dispatch center has an entire wall of video feeds simultaneously showing dozens of images from town parks, recreation centers, beaches and other locations. The video screens can be programmed to enlarge those images so that they span several screens, making it easier for dispatchers to focus on specific locations.

During the news conference, the video board displayed images from Shirley Beach, Michael P. Murphy Park in Lake Ronkonkoma and the Rose Caracappa Senior Center in Mount Sinai. A drone surveyed Shirley Beach — a feature that could help town officials assess storm damage and erosion after hurricanes and nor'easters.

The system also uses GPS devices installed in every town vehicle to track snow plows, bay constable boats and public safety cruisers, whose locations are displayed over on a map of the town. That will make it easier to dispatch vehicles to emergencies, officials said.

"It really helps us protect our assets," Councilwoman Jane Bonner said. "Our assets are the taxpayers' assets."

Note: An earlier version of this story incorrectly reported the total cost of the project.