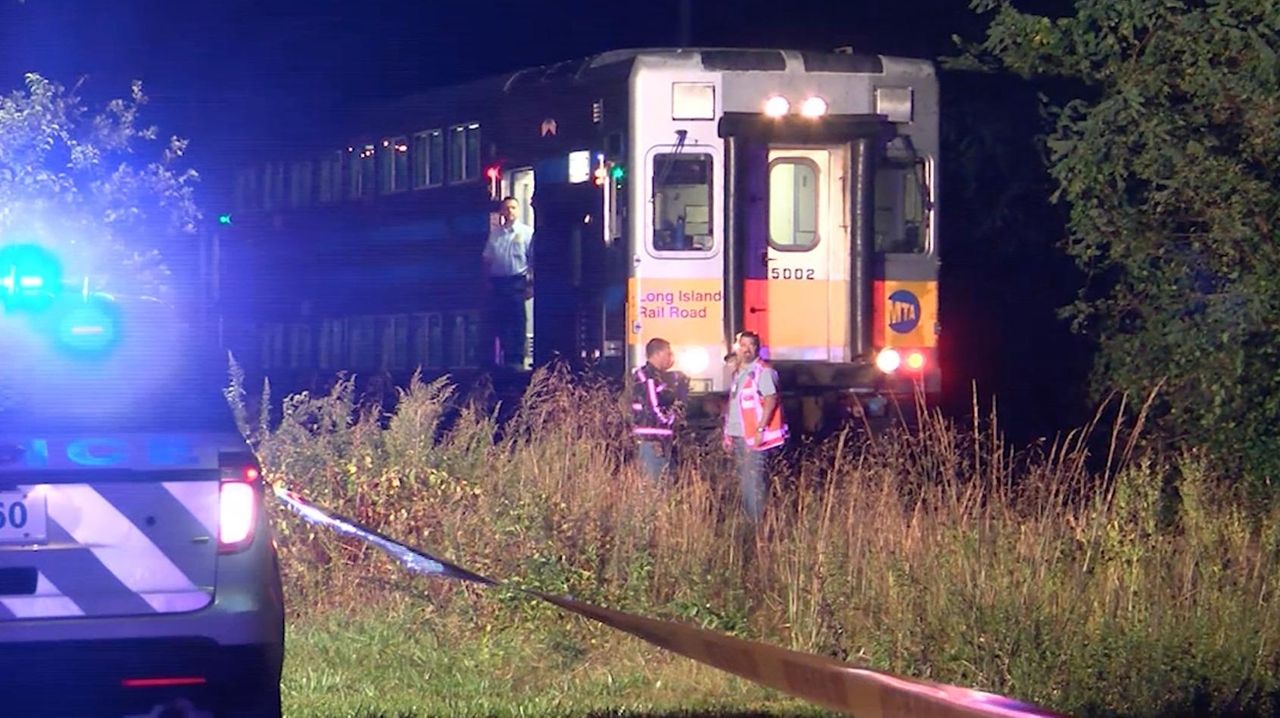 A Long Island Rail Road train struck a vehicle and sent it into the woods at the railroad crossing on Montauk Highway and Arthur Avenue in Brookhaven on Tuesday, Oct. 10, 2017. Credit: Stringer News Service; James Carbone

An off-duty firefighter rescued a Holbrook woman from her car, seconds before the stranded vehicle was plowed down by a Long Island Rail Road train.

“I owe him my life,” said Janice Esposito, 43, tears streaming down her face as she hugged Peter DiPinto Sr. in an emotional reunion at her home Wednesday, hours after the rescue Tuesday night.

“I got a son named Daniel too,” DiPinto told the boy. “It’s a great name. I’m so happy your mom is here with us.”

DiPinto, 65, a Brookhaven firefighter, pulled Esposito from her vehicle after it was involved in an accident and ended up on the Montauk branch train tracks. Moments later, the eastbound LIRR train struck Esposito’s car.

“I think back on it now, it was like a Hollywood movie,” DiPinto, said earlier Wednesday outside his home. “The bells, the gates coming down.”

Esposito said she would normally have had Daniel in the car.

“I was alone last night, thank God,’’ she recalled. “I saw the footage this morning. I saw my son’s blanket up in the bushes. It flew out of the car. I was just thinking . . . what could have happened.”

There were no reported injuries to any passengers or crew members on the train, according to the LIRR.

Esposito became trapped in her vehicle after an accident involving another vehicle at the Arthur Avenue crossing about 10:15 p.m., fire officials said.

Esposito’s vehicle had just crossed the railroad tracks on northbound Arthur Avenue when it hit another vehicle and was pushed back onto the tracks, according to the police accident report.

DiPinto, a 30-year veteran of the Brookhaven Fire Department who lives nearby, said he was in his pajamas at the time, but grabbed a flashlight and went to the scene with his wife.

After helping the driver of one vehicle, “I turn and I see the [other] car on the tracks about 100 feet down,” he said.

“I was starting to go round the front of the car and the bells and the gates were starting to come down and I see the headlight of the train coming from Bellport,” he said.

The driver’s door was jammed shut by the collision, so DiPinto went to the passenger side and pulled out Esposito.

“The only thing on my mind at that point was just, please God don’t let her be trapped, because we had to get her out at that moment,” he said.

After rescuing Esposito, DiPinto helped her along the tracks toward a signal box while waving his flashlight at the train.

“I was doing like this at the train,” DiPinto said, gesturing with his right arm, “but he was going so fast.”

“Literally, within five to seven seconds of running over there, the train came and just destroyed the car that was there,’’ he said. ‘‘There’s no doubt in my mind if she was trapped, it would be terrible right now. I don’t think she would have survived.”

DiPinto said he was relieved Daniel wasn’t in the car.

“Absolutely, when any of us, whether you’re a firefighter or police or just an ordinary Good Samaritan, sees a child seat” there’s concern, he said.

“He was there at a good time . . . He’s just there for everybody, perfect time,” the chief told News 12 Long Island on Wednesday morning. He’s “willing to do whatever needs to be done to protect.”

According to the LIRR, the eastbound train originated in Jamaica around 8:53 p.m., bound for Montauk. LIRR officials tweeted an alert shortly after 11:20 p.m. saying service had been temporarily suspended on the Montauk branch between Speonk and Patchogue because of the crash.

The incident resulted in the cancellation of two LIRR trains, and regular service was restored at 11:45 p.m. Tuesday night. Metropolitan Transportation Authority Police are investigating the incident.

CORRECTION: An earlier version of this story misstated how Esposito’s vehicle ended up on the tracks.