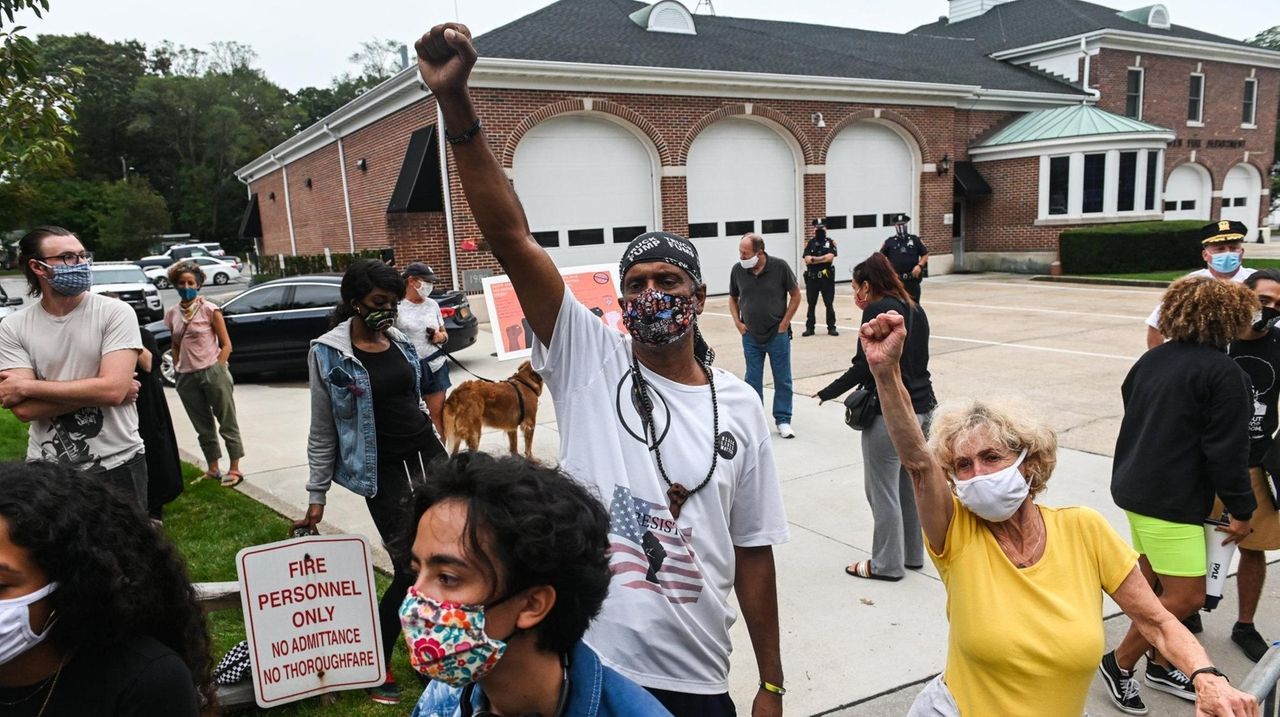 Long Islanders gathered outside the Brookhaven fire house on Wednesday to demand that action be taken after a firefighter unfurled a Confederate flag on a Brookhaven Fire Department ladder truck during a Patchogue parade.  Credit: Newsday / Steve Pfost

Two firefighters have resigned after one unfurled a Confederate flag on a Brookhaven Fire Department ladder truck during a Patchogue parade.

In a statement released late Wednesday afternoon, the department's board of fire commissioners said the unidentified firefighters "tendered their resignations" after they had been suspended for their roles in the incident last weekend.

"There is no place for racism of any kind" in the fire department, the commissioners wrote. "There is no excuse. There is no defense."

The appearance of the flag — a symbol of the slaveholding Southern states during the Civil War — has created a firestorm since images of the banner appeared on social media last weekend.

About 100 demonstrators gathered Wednesday evening outside the firehouse on Montauk Highway, chanting slogans such as, “Hey hey, ho ho, this racist flag has got to go.”

The protesters, including white and Black demonstrators, cheered and applauded when an organizer, Jordan Michael DeAngelo, read the fire department statement announcing the resignations.

Several fire department officials spoke briefly to a small group of protesters. After explaining that the firefighters had resigned, the officials went inside the firehouse as some protesters accused them of racism.

Protest organizer Monique Fitzgerald, in an interview before a scheduled Wednesday evening demonstration outside the firehouse, said Brookhaven and other taxpayer-supported fire departments too often use racist symbols on trucks and in connection with competition drill teams.

The ladder truck had taken part in a drive-by parade in downtown Patchogue honoring an ill firefighter from another department. The Brookhaven department was one of about 50 fire departments taking part in a firefighters competition there.

Brookhaven Chief of Department Peter Di Pinto Jr. on Sunday apologized for the flag and said racism is not tolerated by the department.

Late Tuesday, Di Pinto said in a letter posted on the department's Facebook page that a review showed the driver of the truck had hung the flag and a second firefighter on the truck failed to remove or report it.

In the letter, Di Pinto said the department had asked the Suffolk human rights commission to provide "implicit bias training" to all firefighters, adding, "Our goal is to have this training completed in the next few weeks."

Elaine Gross, president of Syosset-based ERASE Racism NY, said the department “should go a little deeper to find out what happened.”

"I think that if those are the only two, then that’s good," she said, adding: "I am assuming that there must have been a lot of people who saw this or were aware of this … It’s disturbing that no one saw fit to act."

Di Pinto described the flag as "a relic" from a fire department race team that took part in tournaments in the 1980s. His Sept. 1 letter does not indicate whether the flag belonged to the department or the driver.