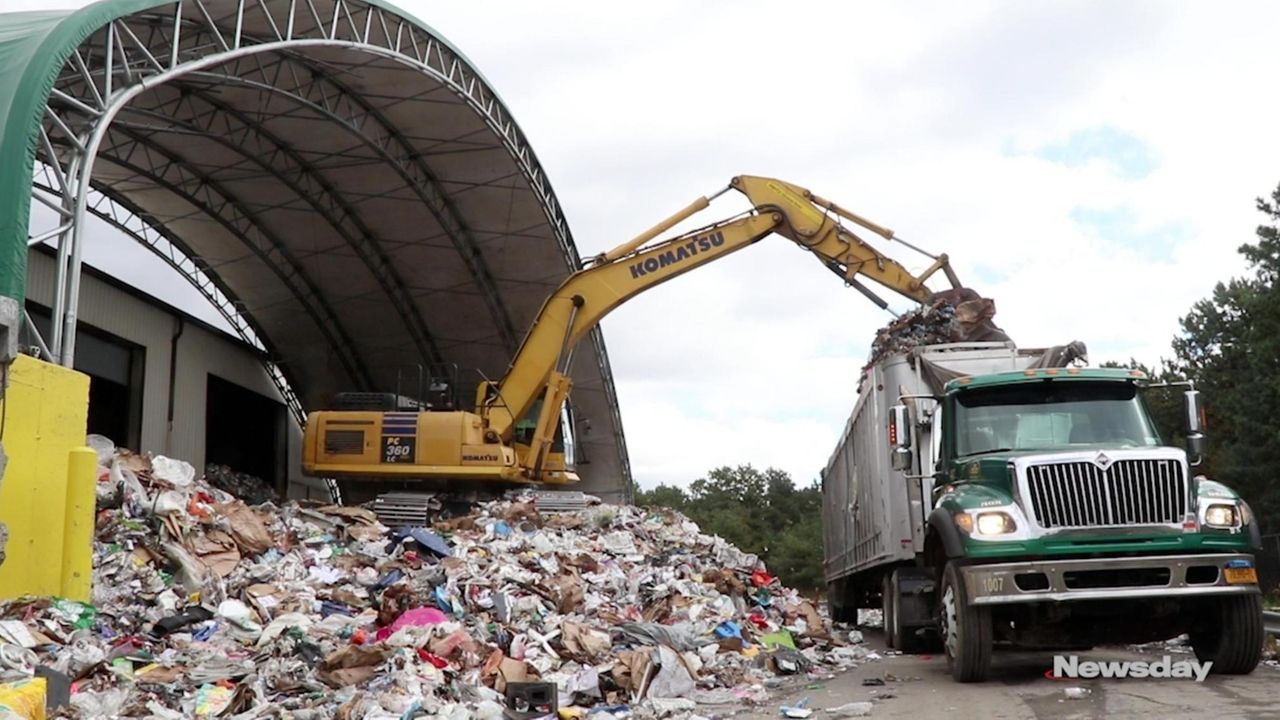 On Monday, Green Stream Recycling stopped processing recyclables at Brookhaven’s recycling facility, but the company was on site to haul away the tons of unprocessed materials that remain there. Green Stream Recycling told town officials it could no longer process discarded paper, plastics, cardboard and aluminum at the plant in Brookhaven hamlet because of worsening conditions in recycling markets stemming from China's decision earlier this year to curtail purchases of U.S. recyclables. Credit: Jessica Rotkiewicz

Green Stream Recycling on Monday stopped processing recyclables at Brookhaven’s recycling facility, but the company was on site to haul away the tons of unprocessed materials that remain there.

“We are ceasing operations processing incoming material. Right now, we are cleaning up the stockpile material,” Green Stream President George Bateman said at the facility on Monday.

The company informed Brookhaven last week that it could no longer afford to run the town’s recycling facility because of collapsing commodities prices streaming from China’s decision to curtail purchases of U.S. recyclables. Brookhaven officials say the company owes the town $1.7 million in fees and unpaid bills.

“I don’t know what the number is, but going forward I’m sure we’re going to negotiate with the town," Bateman said.

Will Flower, vice president of Winters Bros. Waste Systems, which co-owns Green Stream, said Monday the company planned to meet with Brookhaven in the coming weeks, after saying last week that the company likely will not pay.

Green Stream was only four years into a 25-year contract with the town. The company's exit means Brookhaven could be forced to abandon its single-stream recycling program, in which residents were allowed to combine paper, plastic, aluminum and glass in one container. Whether Brookhaven continues single stream or switches to dual-stream recycling will depend on which operator takes over the program long term.

He said material was once sold at $180 per ton and the company now has to pay to get rid of it.

“The market has always been up and down, but this is an industry, worldwide change,” he said.

On Monday, one truck from Winter Bros., based in West Babylon, was being filled with unprocessed recyclables from Smithtown, Southold, Huntington and Brookhaven towns.

Bateman said the material would be taken to other company-owned recycling centers across Long Island.

Meanwhile, Brookhaven will hold a special meeting Thursday to name a new operator to temporarily run the recycling program.

Brookhaven Town Chief of Operations Matt Miner said Monday that the emergency contract bid is for six months with a possible six-month extension as town officials contemplate a long-term solution regarding single-stream or dual-stream use.

Brookhaven officials have told villages and towns that use the facility that they may opt out of the program. Smithtown and Huntington are seeking new recycling vendors. Those towns, as well as Southold and Oyster Bay, have also said they are reconsidering single-stream programs.