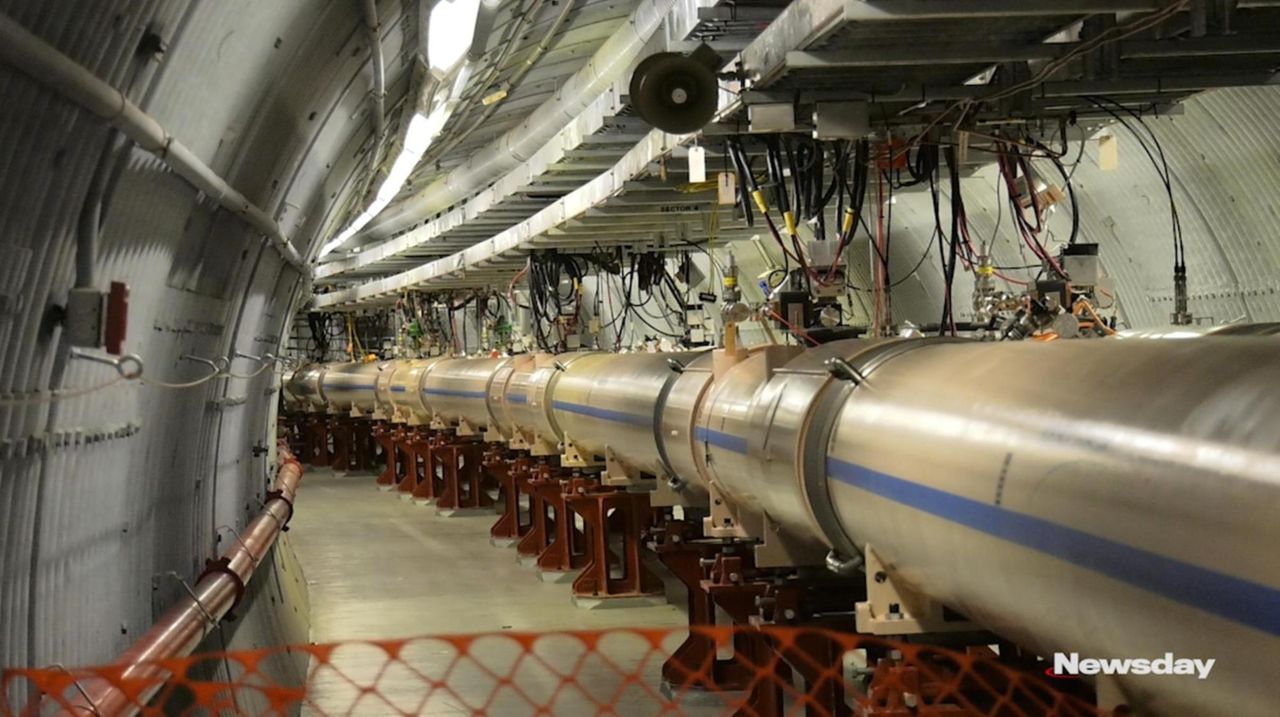 The federally funded facility will be the only one in the country that will have a specialized telescope to examine atoms. Credit: Newsday / John Paraskevas

A $2 billion atom-smashing supercollider that will be built over the next decade at Brookhaven National Laboratory has the potential to unlock some of the world's deepest scientific secrets — and create thousands of jobs, Long Island and state officials said Friday.

During a ceremony at the Upton lab, officials said the federally subsidized electron-ion collider — an underground complex capable of smashing atoms at dizzying speeds so that scientists can examine their component parts — will put the United States at the forefront of scientific research.

And, just as importantly, they said, it will put people to work.

"This EIC will put Long Island at the center of science — not just in the United States, but in the world," said Sen. Chuck Schumer (D-N.Y.), one of more than a dozen dignitaries to speak at the event.

Then, reaching into a paper bag, Schumer brought out a pair of foam balls and showed them to the crowd.

"When you smash these two together, what does it get?" he said. "Long Island jobs."

The federal Department of Energy, which owns the lab, announced in January it had selected Brookhaven over a Virginia research center for construction of the enormous particle accelerator, expected to cost between $1.6 billion and $2.6 billion. The announcement followed years of lobbying by Schumer, Gov. Andrew M. Cuomo, Sen. Kirsten Gillibrand (D-N.Y.) and Rep. Lee Zeldin (R-Shirley) to bring the project to New York.

Planning and final approvals for the project will take place over the next five years, laboratory officials said. Construction of the collider would require about an additional five years.

The lab's existing relativistic heavy ion collider, or RHIC — one of the world's most powerful supercolliders — will be phased out in 2025. Part of the remaining RHIC will be incorporated into the electron-ion collider, officials said.

The new collider will be built in the circular underground tunnel, about 2.4 miles in diameter, that contains the RHIC, officials said. When it's completed, high-energy beams — one containing electrons and the other either protons or heavier atomic material — will run in opposite directions through two parallel tubes.

The tubes intersect at several points, causing the beams to smash together in head-on collisions, like a quantum physics version of a demolition derby.

The new collider, unlike the RHIC, will enable researchers to study the mysterious matter called gluons, which, as the name suggests, is the glue believed to bind together key molecular building blocks known as quarks.

The new collider, expected to create as many as 4,000 construction jobs, also is expected to save about 1,000 laboratory jobs that might have been lost when the RHIC is retired, officials said.

Lt. Gov. Kathy Hochul said at the ceremony the new jobs "are exactly what we need right now," adding that the collider would boost scientific research at a critical time.

State officials had spent more than $100 million — including $65 million for Stony Brook University, which co-manages the lab — as part of its lobbying effort for the collider.

"COVID-19 has shown us how critically important it is to invest in our scientific infrastructure so we’re ready for future crises," Cuomo said in a statement, "and New York is already investing significant resources to make it a hub for scientific innovation and research."

Though the RHIC has expanded scientists' knowledge of the universe far beyond initial expectations when it was constructed two decades ago, the inner workings of protons and neutrons — the components behind nearly everything from planets to people — have remained a mystery.

The intensity of the electron beam in the new collider would enable detection devices to make snapshots of the protons' inner structure with unprecedented precision, lab officials said. The research has applications in space exploration, but also medicine, such as in the development of treatments for tumors, officials said.

In a statement, Paul Dabbar, undersecretary for science at the Energy Department, called the collider "a one-of-a-kind research facility."

"From the most basic components of matter to the farthest reaches of the cosmos to the next technologies that will drive the economy of the United States and the world, the DOE will continue this mission right here at Brookhaven and at our labs across the country," he said.

Brookhaven Lab director Doon Gibbs said in a statement the collider "will maintain leadership in nuclear physics and accelerator science and technology."

Zeldin, who recalled playing on the laboratory grounds as a child, said the supercollider "is a really, really, really big deal."

"This is an instrument that is certain to change the world," he said. "It will change humanity."

How it will work

Brookhaven National Laboratory's electron-ion collider, or EIC, will work much like a high-tech demolition derby.

The underground atom-smasher will include two tubes. An electron beam will travel in one tube, and a beam of protons, or another material, in the other tube. The materials will run at high speeds in opposite directions.

The tubes intersect at key points, causing the electrons and other material to smash together in head-on collisions.

The electron beam will pierce the other, larger particles, revealing details of material such as gluons, the glue-like stuff believed to bind together quarks, another key building block of life.

Special imaging devices will make three-dimensional snapshots of gluons and quarks that now are unobtainable with any existing supercollider.