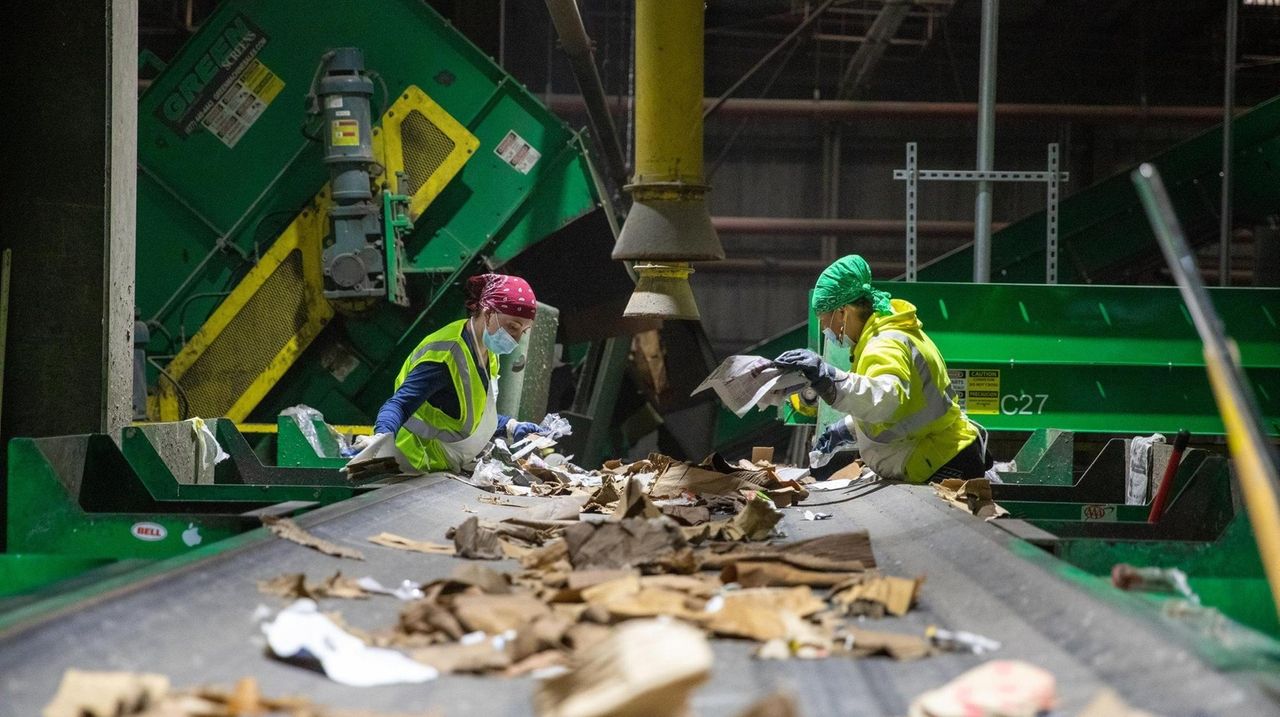 Will Flower, vice president of Winters Bros. Waste Systems, spoke to Newsday about the revamping that led to the Brookhaven recycling center reopening.  Credit: Morgan Campbell

Brookhaven's revamped recycling center — reopened earlier this year after a $7.5 million modernization — has town officials saying they have resurrected a recycling program that fell apart two years ago amid major changes in the international commodities market.

The plant on Horseblock Road in Brookhaven hamlet closed in November 2018 when China drastically curtailed purchases of American recyclables. That prompted the town to ditch its single-stream recycling program — in which homeowners commingled paper, glass, plastics, metals and cardboard in single bins for weekly curbside pickup — and switch to a dual-stream system, which requires residents to separate recyclables.

After shipping its recyclable waste to a Brooklyn plant for more than a year, Brookhaven reopened its facility in March. Since then, it has processed more than 25 million pounds of material — a milestone that has the town and plant operator Winters Bros. Waste Systems proclaiming the revamp a success.

"If there's something that's good about 2020, it's that this facility has come back," Winters Bros. vice president Will Flower said Friday during a tour of the plant. "That's 25 million pounds [of trash] that is not going to the landfill."

The 75,000-square-foot plant — the largest in Suffolk and Nassau counties — takes in up to 38 tons per hour of recyclables that are sorted and packed in enormous bales for shipment. Brookhaven's net costs for recycling — after paying Winters Bros. a fee and receiving a share of revenue from sales — is about $40 per ton, Flower said.

Brookhaven's goal is to produce recycled plastic, paper, metals and cardboard that is as clean as possible to make it more marketable, officials said. Previously, the town aimed for larger quantities of material, but that resulted in too much residue from packing tape, shipping labels and moisture from rain and beverage liquid.

Recycled material can be used in products ranging from new cans and boxes to clothing and furniture.

Flower said Winters Bros. removed most of the plant's old equipment, some of it decades old, and replaced it with newer models. Recyclables are moved by 18 employees over more than a dozen conveyor belts spanning about 700 yards while material is separated by hand or by low-tech devices such as optical scanners, blowers, magnets and eddy currents.

Getting residents to recycle remains a challenge. Town officials say about 15% of household trash is recycled.

But officials said the amount of material is less important than how clean it is. While officials encourage residents to increase their recycling, they stress the importance of strictly following guidelines for proper disposal.

"We changed our focus from quantity to quality," Flower said. "So far we're able to produce a great quality product."

What is not collected:

Pfizer board member: Likely no COVID-19 shot for kids under 5 until at least late March
Nassau assessments frozen for second year in a row
Hochul holding a commanding position in race for governor
PSEG puts its plan to offer $1,000 vaccine incentive on hold
Infrastructure improvements, COVID-19 boost LIRR on-time record
1:26
The school year began with rising hopes of a new normal. Then omicron hit.
Didn’t find what you were looking for?