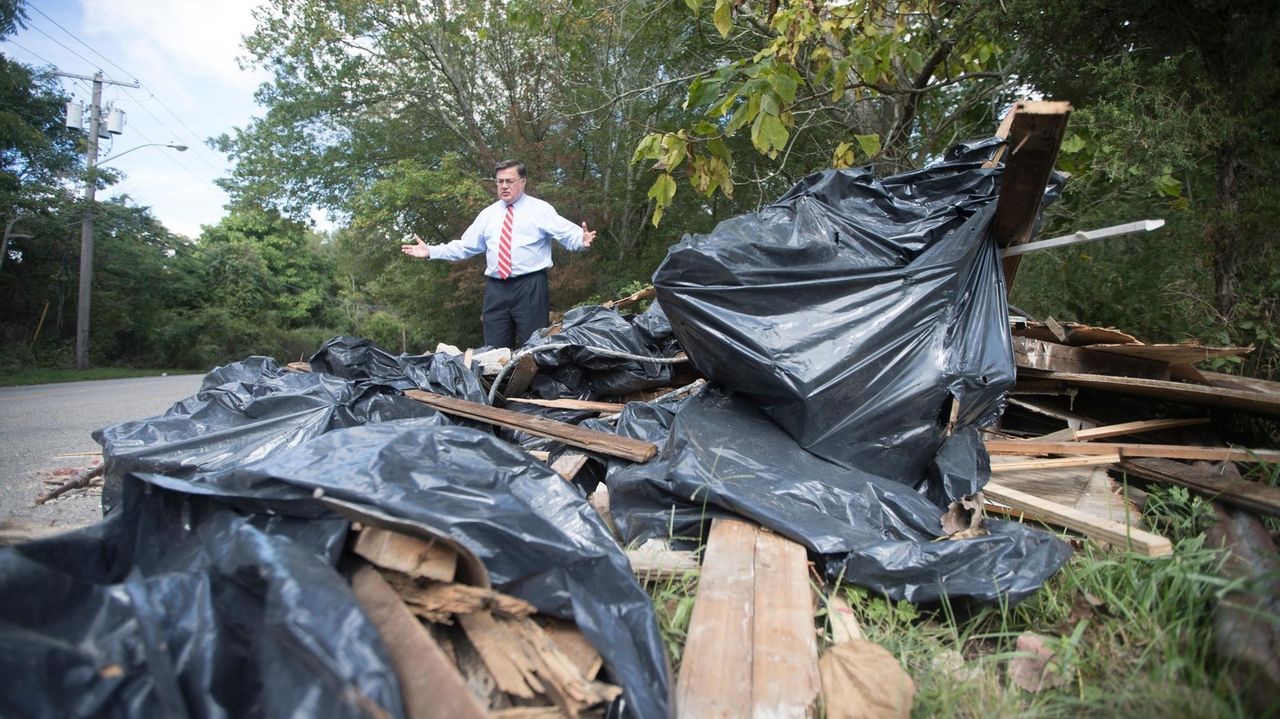 Town council members on Thursday are to vote to create a reward program that provides a financial incentive for residents to report illegal dumping.

Tires, boards, mattresses and equipment have been dumped in open spaces across the town this year, officials said.

On Monday, Brookhaven announced it removed 62.8 tons of construction and household debris from Toppings Path, a popular trail for hikers and mountain bikers in Ridge.

On Tuesday, Romaine stood in front of a mound of roofing debris along a road in Middle Island.

“We want to put an end to that,” he said. “Help us enforce our codes against dumping.”

If the program is approved, Brookhaven would fine builders and or contractors a maximum of $2,000 for dumping. Residents would receive up to half of the fine amount if their claim proves true.

Romaine said he is considering increasing the maximum fine if the proposed resolution is passed.

“If you help us, help us be our eyes and ears, there’s an incentive,” Romaine said this week.

Town Councilwoman Valerie Cartright said she is undecided about the plan.

“I think it’s important that we address the illegal dumping issue head on,” she said. “Getting the community involved is important, but we need volunteers to help monitor dumping instead of relying on a financial incentive.”

She said she wants to learn what other options are out there.

“It’s a little disappointing that we have to provide a financial reward to report illegal dumping that affects the public’s health and safety.” said Adrienne Esposito, executive director of the Citizens Campaign for the Environment. “We need to do everything we can to stop illegal dumping, but there are smarter ways than to use taxpayers’ dollars as a financial incentive.”

Romaine said the rewards would be paid by the fines. Much of the dumping in Brookhaven isn’t from residents, but from contractors doing business in the town, he said.

In Brookhaven, illegal dump sites have been discovered in Coram, Manorville, Moriches and Holtsville.

Other municipal officials have struggled to contain large-scale illegal dumping of construction debris. Islip Tow’s Roberto Clemente Park in Brentwood was closed after more than 40,000 tons of construction and other debris were found. Suffolk County lawmakers last month announced a new telephone hotline and email address that parkgoers can use to report dumping and other problems such as vandalism and graffiti they see in parks.