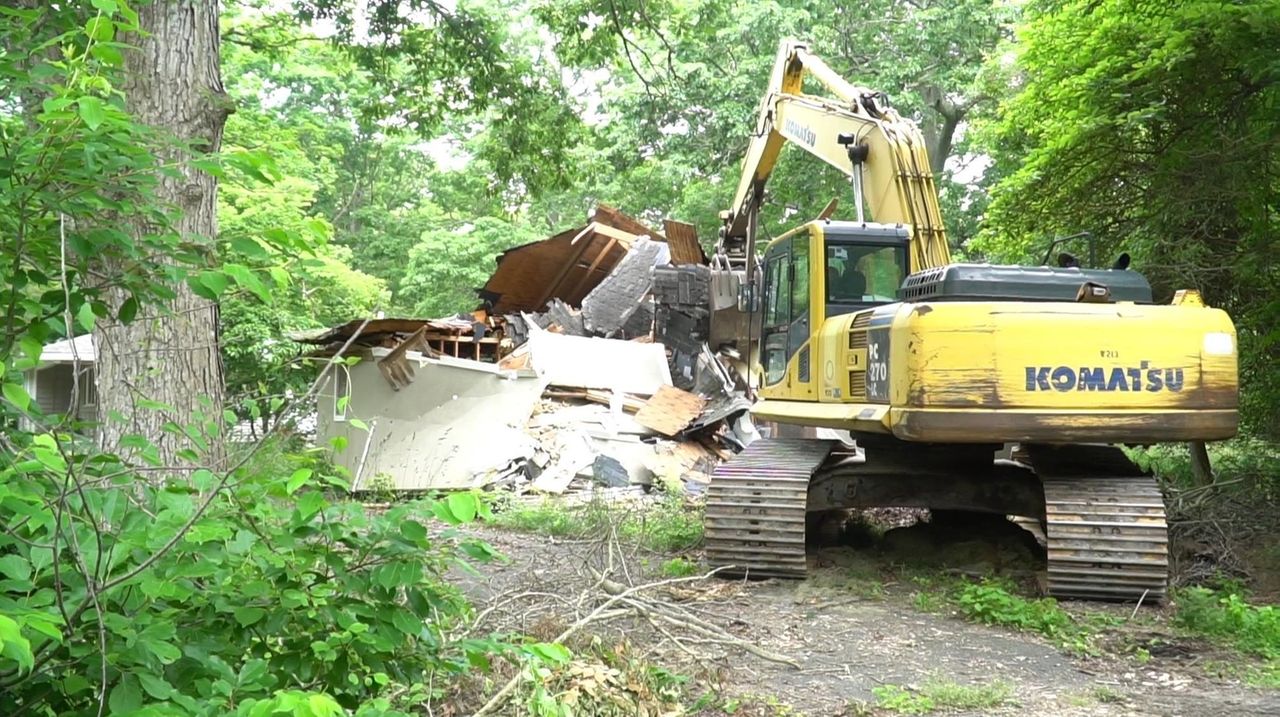 Brookhaven Supervisor Edward P. Romaine and Councilmembers Jane Bonner and Neil Foley spoke about the demolition of the 200th "zombie house" in the town on Wednesday as the Coram structure was torn down.  Credit: Ed Betz

Brookhaven Town officials on Wednesday demolished the 200th vacant and abandoned home under an initiative to crack down on blight.

Town Supervisor Edward P. Romaine used the milestone occasion to call on federal and state lawmakers to direct some of the hundreds of millions of dollars from bank settlements in recent years for foreclosure abuses and deceptive practices to creating a pilot program to help save the structures.

“Take some of the fine money and allow us to buy back some of these houses that are just sitting there falling apart,” Romaine said Wednesday. “Let us fix them up and give them to first-time home buyers and veterans.”

Romaine said some of the settlement money could be used to create a fund to refurbish homes in hopes of rescuing them.

“We obviously could resell the houses and the money would replace the money we get” from the settlement funds, Romaine said. “I’m not saying we could save every house, but one out of three we could.”

The Coram house was torn down under Chapter 73 of town code, which provides a fast track to ridding neighborhoods of unsafe structures.

The property owner is responsible for demolition and debris removal costs, and the town plans to place a lien on the house, which will then be added to the tax bill.

Suffolk County will reimburse Brookhaven for the removal costs and collect the money from the homeowner, Romaine said.

Town to create a registry of zombie homes

“I don’t like tearing down anything that can be saved, but these houses are so bad that we’re left with no choice,” Romaine said, adding dilapidated homes negatively affect home values and quality of life.

Romaine first made cracking down on vacant homes a priority in 2013. In 2014, he conducted the “Dirty Dozen” campaign, where he targeted a dangerous group of homes that were eventually torn down.

The Coram house was taken down as part of the “Neighborhood Clean Up Initiative.”

Brookhaven officials estimated four years ago there were nearly 2,000 vacant and abandoned home in the town, a third of which were considered zombie homes that were in the foreclosure process.

Zombie homes, a legacy of the 2008 mortgage crisis, are houses in the foreclose process vacated by homeowners before banks take title to them.

A 2015 investigation by Newsday and News 12 Long Island found that Suffolk and Nassau counties led the state and ranked in the top 10 nationally in the number of zombie homes.

“It’s with mixed feelings that I do this but we are going to continue to knock down the eyesores,” Romaine said.