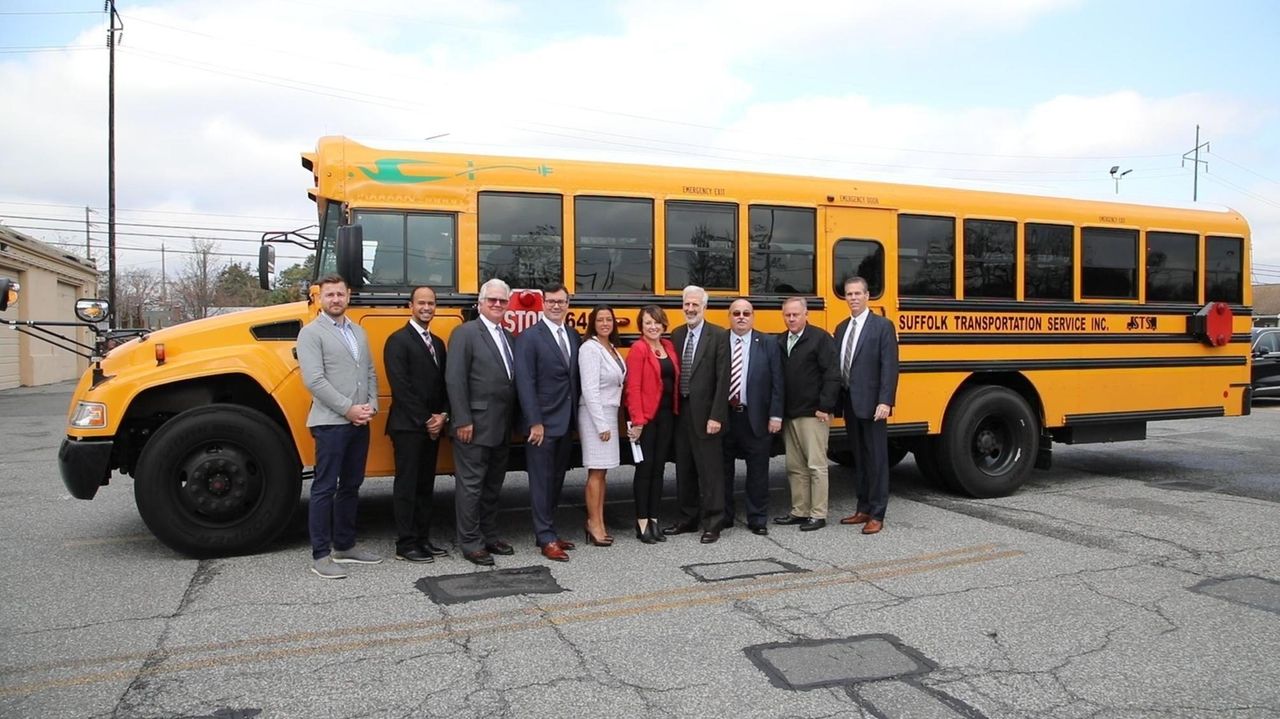 The Bay Shore school district said Tuesday it has been using four all-electric buses since October to ferry some of its 6,600 students. Credit: Barry Sloan

Bay Shore schools have joined the growing ranks of others on Long Island opting for all-electric buses over traditional diesel-powered ones.

The district has been using four electric buses since October to ferry some of its 6,600 students. Its busing contractor, Suffolk Transportation Service, purchased the green vehicles from Blue Bird with the help of a $695,500 grant from the Environmental Protection Agency.

Bay Shore Schools Superintendent Joseph Bond said adding the buses to its fleet is part of an overall movement toward green policies.

“Over the last four years, the Bay Shore School District has taken many steps to reduce our carbon footprint,” he said. “We have worked to make our buildings more energy efficient, we have eliminated more than 1.7 million metric tons of Co2 emissions over the last five years.”

A student-led effort ceased the use of plastic straws before a new Suffolk County ban goes into effect in January, and the district plans to add solar panels to all its buildings, Bond said.

The average diesel bus has a life expectancy of 10 to 12 years, and “we expect that these motors will last longer,” Corrado said Tuesday during a news conference at the company’s Bay Shore facility.

The bus has the same body as its diesel counterpart, but the engine is smaller and quieter, the bus needs less maintenance and it produces zero emissions.

The vehicles charge overnight, providing power for up to 120 miles, according to Blue Bird. The cost to operate a diesel bus is 75 cents per mile, compared with an electric bus at 17 cents per mile, said Richard Gallagher, the district’s transportation director.

Corrado said the company is applying for state grants and is planning partnerships with companies for future buses, hoping to bring them to Brentwood and Central Islip schools next.

For every $1 the federal government spends on electric vehicles, it generates $2 in fuel savings for vehicle operators and between $11 and $30 in public health benefits, Mugdan said.

“This really is a win-win . . . and we will continue to make our air cleaner for ourselves and for our children,” he added.

Copiague schools got the first all-electric school bus in New York State in 2016, Newsday reported. Massapequa schools got an electric bus this school year, and Hicksville schools will get one soon, said a spokesman for Educational Bus Transportation, which is providing the green buses for the schools. Other schools have gotten buses retrofitted using EPA grants.