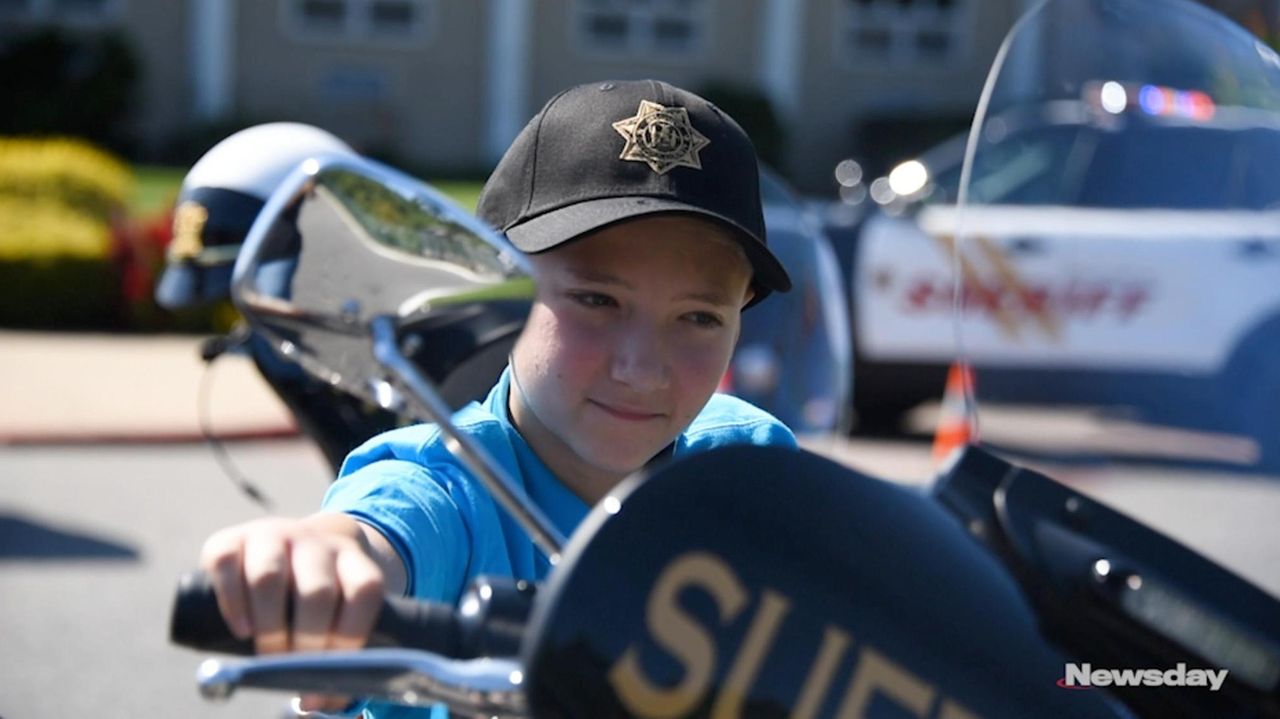 Two cancer survivors, a boy of 12 and the sheriff of Suffolk County, came together Tuesday in a way that usually only happens in a boy's dreams. Douglas Grimmett, an Eastport seventh-grader 3 years free of cancer, was named "Suffolk County Sheriff for a Day."  Credit: Danielle Silverman

Two cancer survivors — a boy of 12 and the sheriff of Suffolk County — came together Tuesday in a way that usually only happens in a boy's dreams.

The honor afforded him a gold badge and a slew of salutes from deputies. He also got to play with the department's heavily armored anti-terrorism vehicle, a police motorcycle, two K-9 dogs, and a rubber raft that had three wheels.

"Cool," was a word never far from his lips.

Something special happened when Douglas, who was diagnosed at age 6 with acute lymphoblastic leukemia, sat down with Sheriff Errol Toulon Jr., himself a two-time cancer survivor.

Sitting together at a table in the sheriff's office in Riverhead, Toulon asked Douglas what grade he was in. The boy said he was a seventh-grader at Eastport-South Manor Junior/Senior High School.

The sheriff teased Douglas about all the responsibility that comes with being sheriff to some 1.4 million people, making sure that the public and his deputies were kept safe.

Then the sheriff told Douglas about his own battles with cancer. He was diagnosed with lymphoma in 1996 and underwent chemo and radiation therapy. He was struck again in 2003 with pancreatic carcinoma, which required surgery.

Toulon told Douglas that he and his department would always be there for the boy, and he hoped that they could connect year after year into the future.

Then the sheriff choked up. He couldn't speak for a moment.

"I'm getting a little emotional," he said.

Toulon was thinking, he explained later, how hard it was fighting off his bouts with cancer. And he was thinking how hard it must have been to face all that as just a kid.

Without word, the sheriff and the boy nodded to each other and exchanged a big high-five.

Tuesday was also a big day for Douglas' parents and his younger brother Ben, 10, who was afforded the honorary rank of deputy sheriff.

Their father, Adam Grimmett, an NYPD sergeant, said Douglas had enjoyed speaking to groups and bringing more attention to the fight against cancer. He was chosen as the "Boy of the Year" by the Long Island Chapter of the Leukemia & Lymphoma Society in 2015.

Douglas prepared a little speech for Tuesday. He said that in 2013, he started to feel very weak and his legs hurt. The pain was so bad that he could not step up into the school bus.

"I was taken out of school and missed a lot of playtime with friends," Douglas said. "My mom had to stop working to take care of me."

Once diagnosed, Douglas had to endure chemotherapy, blood transfusions and spinal taps.

"It was hard for everyone," said Douglas.

He was declared cancer-free on July 24, 2016. The family celebrates that day every year. Douglas wants to grow up to become a neurosurgeon, because, he said, "I want to save people's lives."

Douglas looked like he was jumping into a Batman movie as he climbed aboard the department's huge armored vehicle. The tires themselves were as tall as him.

The whole Grimmett family sat in the rear compartment of the monster truck. Douglas shared a quick smile with his mother, and all the family members put their hands together, the way some sports teams do before a big game.

From there, Douglas and his brother hopped aboard the department's amphibious vehicle, a big black rubber raft that has three wheels underneath so it can travel on land.

He got to pet one of the K-9 dogs, called Canine Jett, get on a police motorcycle and hit the lights and siren, and handle the controls that hydraulically lifted the Sky Watch Command Post high into the air.

"The best part," Douglas said, "was everything."