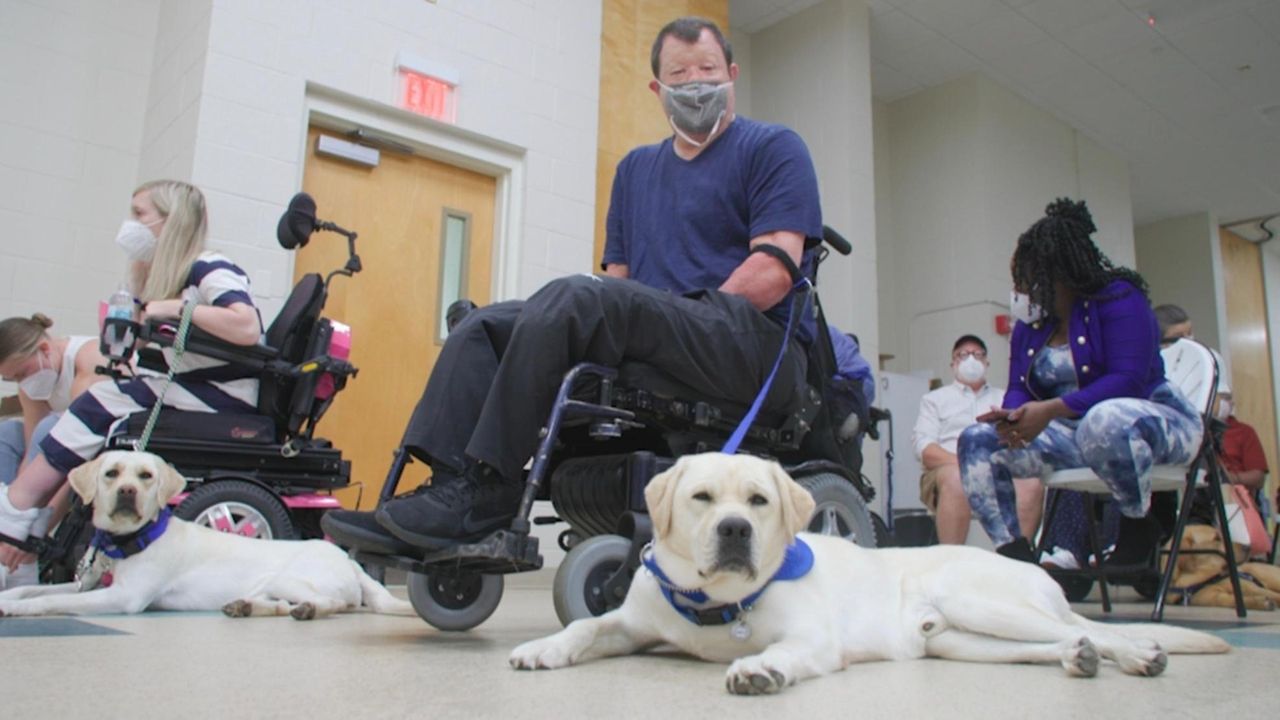 For 32 years, Dan Gropper has lived on his own with his disabilities.

He has managed his life after losing both his hands and both legs below the knees to a fire in 1989 and has learned to remain active in a wheelchair.

But Gropper, 52, of Rockville Centre, noticed something was missing. As he got older, he felt the strain of trying to pick things up off the ground and open doors. He realized he needed a companion.

On Thursday he got sent home with a new family member as he and his service dog Zinger graduated from the Canine Companions Training Center in Medford.

"It’ll be nice having a dog in the house. When you have a dog, you have a home," Gropper said. "He’s as much as any family members I have around and part of the family."

Thursday marked the first graduation of six dogs and their new owners where they were also able to meet the puppy raisers for the first time.

Canine Companions is a national nonprofit serving people with physical disabilities.Gropper went through a two-year wait and interview process, leading up to two weeks of training before graduation.

"We know the dogs and we get to know the people applying for the dogs, and that’s how we make the matches," director Debra Dougherty said.

Gropper lost his limbs following infection from an apartment fire in Island Park that burned 80% of his body when he was 21. He spent six months at Nassau University Medical Center and a year in physical therapy.

He has remained an active golfer and boxer and gets out of the house often to go to the gym. Now Zinger a yellow Labrador retriever, can help Gropper live an independent life, by helping push doors open and pull doors closed as well as fetch his phone or a water bottle off the ground. He can also help retrieve prosthetics, help him get dressed and turn lights on and off.

Zinger has been in training since he was a puppy, living for the past two years with a college student in Virginia until he was turned back over to the Canine Companions in Long Island in February for more intensive training.

Gropper didn’t meet Zinger until Monday when he was paired as a prospective match. Zinger and five other service dogs were paired with their new owners based on skills, personality and needed assistance with the first overnight visit Wednesday.

For Zinger and Gropper, it was love at first sight.

"Zinger’s a great choice. He’s a mush and very loving and social," Gropper said. "He can’t drive a car yet, but he’s working on it."

She brought Zinger to classes and he kept her company during the pandemic at school until she turned over Zinger in February waiting to hear until he was matched with a new owner.

Diviney tried to control the stream of tears when she first saw Zinger on Thursday and got to share stories with Gropper.

"It’s conflicting because you spend so much time with this dog I had by myself for 18 months. The whole purpose is to allow someone to have a better life and a more independent life," Diviney said. "You go in knowing you may never see this dog again, but it’s worth it. Zinger is where he’s meant to be."

Green amendment, before NY voters next month, has supporters, critics
Equipment checked in hunt for source of deadly Legionnaires' outbreak
More Blacks leaving Long Island for the South
Tierney, Sini battle over who'll be toughest on crime
Syosset twin sisters have special bond with Oceanside coach
Ruby Lee Boykin, former director for libraries, dies at 66
Didn’t find what you were looking for?