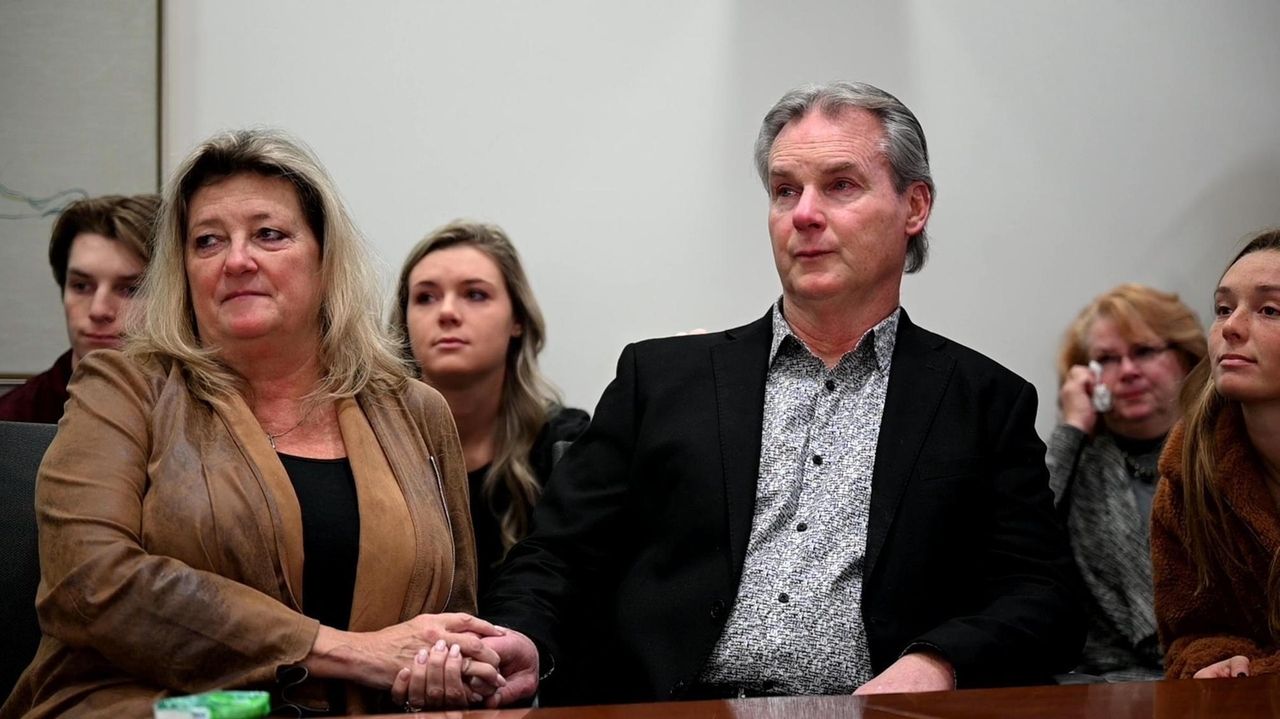 An emotional Dennis Dillon reunited at Stony Brook University Hospital with some of those who likely saved his life. “From the part of the heart that has love, I want to say thank you,” he said. Credit: Newsday / Danielle Silverman

Dennis Dillon was on a boat in Port Jefferson Harbor about two miles from shore this past Labor Day weekend when he had a massive heart attack and went into cardiac arrest.

Fewer than 6% of people who go into cardiac arrest outside the hospital survive, a 2015 Institute of Medicine report says. But Dillon, 62, was lucky to be near medical professionals and others who rushed over on their boats to spring into action, giving CPR, using a defibrillator to administer electric shocks to the Mount Sinai man’s heart, and rushing him ashore and to a waiting ambulance.

“From the part of the heart that has love, I want to say thank you,” a teary-eyed Dillon said, his voice choking with emotion, at a reunion Saturday at Stony Brook University Hospital with some of those who likely saved his life.

Even if Dillon had survived without the help of the other boaters, the quick action prevented potential severe brain injury that could have left him in a vegetative state, said Dr. Robert Pyo, director of interventional cardiology at Stony Brook, where Dillon was taken after he reached shore.

Dillon and his wife, Tricia Dillon, 57, were on their boat last Aug. 31 when, after he returned from a quick swim, he felt pain in his back. He attributed it to an old back injury, but then came nausea and severe chest and arm pain. He soon was unconscious, had no pulse and stopped breathing, Tricia Dillon said. She began CPR and, realizing she needed to get him professional medical attention fast, yelled for help.

Dr. Elizabeth Nadal, 32, of Westport, Connecticut, and her fiance, Josh Stein, 33, quickly arrived on their boat, as did, Nadal said, a nurse from another boat whose identity is unknown. Nadal and the nurse alternated administering CPR with Heather Tearne, a physical therapy assistant from Stratford, Connecticut, who arrived shortly after, Nadal said.

Stein radioed to ask if a nearby boat had a defibrillator, and after one arrived, Robert Kloss, assistant chief of the Amogerone Volunteer Fire Company Number One in Greenwich, Connecticut, and a trained emergency medical technician, said he administered shocks to Dillon’s heart.

When Dillon reached Stony Brook, Dr. Puja Parikh, an interventional cardiologist, saw that he had a full blockage of the left anterior descending artery, which moves blood to the heart. That condition is so dangerous — and typically fatal — that it is called “the widow maker,” Parikh said.

“Immediately his blockage was ballooned,” to restore flood flow to the front wall of his heart, and a stent was inserted, she said.

Dillon’s body temperature was then lowered. That is to minimize the production of harmful molecules called free radicals that can cause neurological damage after cardiac arrest, she said.

Dillon is back to work as an orthopedic physician assistant, but he works four days a week instead of five and has a less intense exercise regimen than before the heart attack.

“I’m told to slow down, which is the hardest part,” he said.

Dillon said that before the heart attack, he had a healthy diet and exercised regularly. Pyo said even people like Dillon with healthy lifestyles can have serious heart disease, often for genetic reasons.

Dillon said as he stood near his wife and three children — Rachael, 26, Haley, 20, and Justin, 18 — that he is “much more emotional than I used to be,” thinking about how his kids could have been fatherless, and how he and Tricia wouldn’t be celebrating their 34th wedding anniversary on Valentine’s Day.

He doesn’t remember the heart attack and what happened in the moments afterward. But he was overwhelmed when he was told about the total strangers who helped him.

“Learning what these people did was incredible, incredible,” he said. “If those things didn’t fall in line, anything could have happened.”