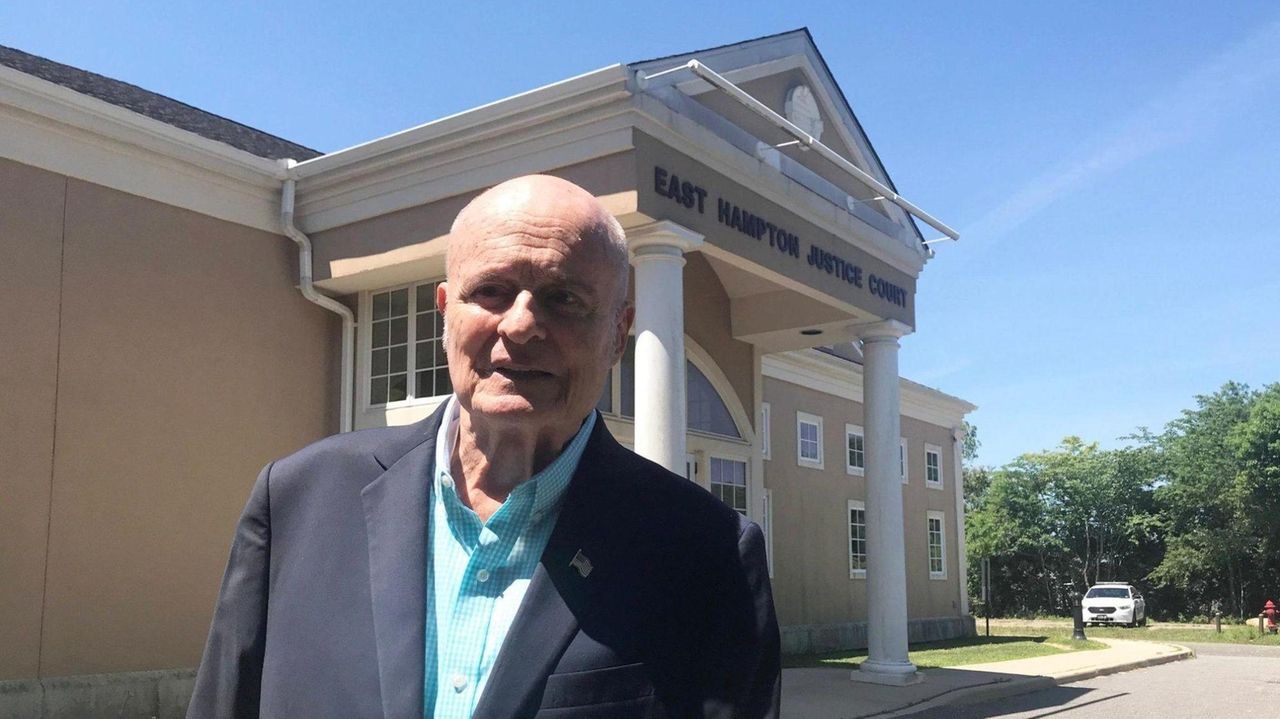 Jay Goldberg, a Manhattan attorney who lives part time in Bridgehampton, argues that East Hampton's three-hour limit on handicapped spaces places hardship on those with disabilities. Goldberg, who said he is blind in one eye and partially paralyzed in the other, and his wife Rema, who was driving, were issued a parking ticket on East Hampton's Main Street on June 1.  Credit: Newsday / Vera Chinese

A Manhattan attorney plans to use a recent federal court decision that questioned the constitutionality of chalking tires in issuing parking tickets to argue that East Hampton Village should not impose a time limit on handicapped parking spaces.

Jay Goldberg, who lives part time in Bridgehampton, said his tire was marked with chalk and he was ticketed on East Hampton’s Main Street on June 1 while attending a screening at a local movie theater. Goldberg, 86, who said he is blind in his right eye and partially paralyzed on his left side, plans to argue that the village’s three-hour time limit on handicapped spaces places a hardship on those with disabilities.

“It’s not possible for the average handicapped person to leave the theater to run out to find a new parking spot,” said Goldberg, whose wife, Rema, was driving. “To require me to get from my seat in the theater once I’m lucky enough to find a spot is harsh and heartbreaking and heartless.”

Traffic control officers can often be seen in East End hamlets and villages, particularly in the summer, marking tires with chalk, a method used to determine whether a car has violated parking time limits. Signs posted along East Hampton’s Main Street note that violating the time limit will result in a $250 fine.

Goldberg will use a high-profile Sixth U.S. Circuit Court of Appeals decision, which found a chalking case in Saginaw, Michigan, constituted a search under the Fourth Amendment, to bolster his argument.

On April 22, a three-judge panel in Cincinnati reversed a ruling from the U.S. District Court for the Eastern District of Michigan that the searches were reasonable. Three days later, the judges issued an amended ruling stating that although chalking is a search, it doesn’t necessarily violate the Fourth Amendment if the city can prove an exception to the warrant requirement.

In May, Saginaw officials asked the appeals court to rehear the case, which was sent back to Eastern District Court.

Goldberg said he will limit the scope of his argument only to apply to handicapped spots, specifically those near the movie theater.

East Hampton Village officials said Monday that they disagree with Goldberg’s interpretation of the Saginaw case.

“The Village does not share Mr. Goldberg's position and therefore does not agree that chalking is unconstitutional,” village administrator Rebecca Molinaro Hansen wrote in an email.

Goldberg appeared in town justice court on Monday stating his intention to fight the matter, and East Hampton Town Justice Lisa Rana gave him 45 days to file a motion in the case.

East End residents visiting East Hampton’s downtown on Monday had plenty of criticism for the chalk technique, although some said they understood why it was used.

“I think it’s a very inaccurate way to keep track of how people park,” said Alan Klein, of East Hampton, noting that drivers can easily move up a few feet and turn the chalk mark. “Then again, people will abuse the privilege [to park], so they have to have some method.”

Billie Lim, who owns a home in Montauk, said the village should consider using meters instead.

“I think it’s rude,” she said of chalking.