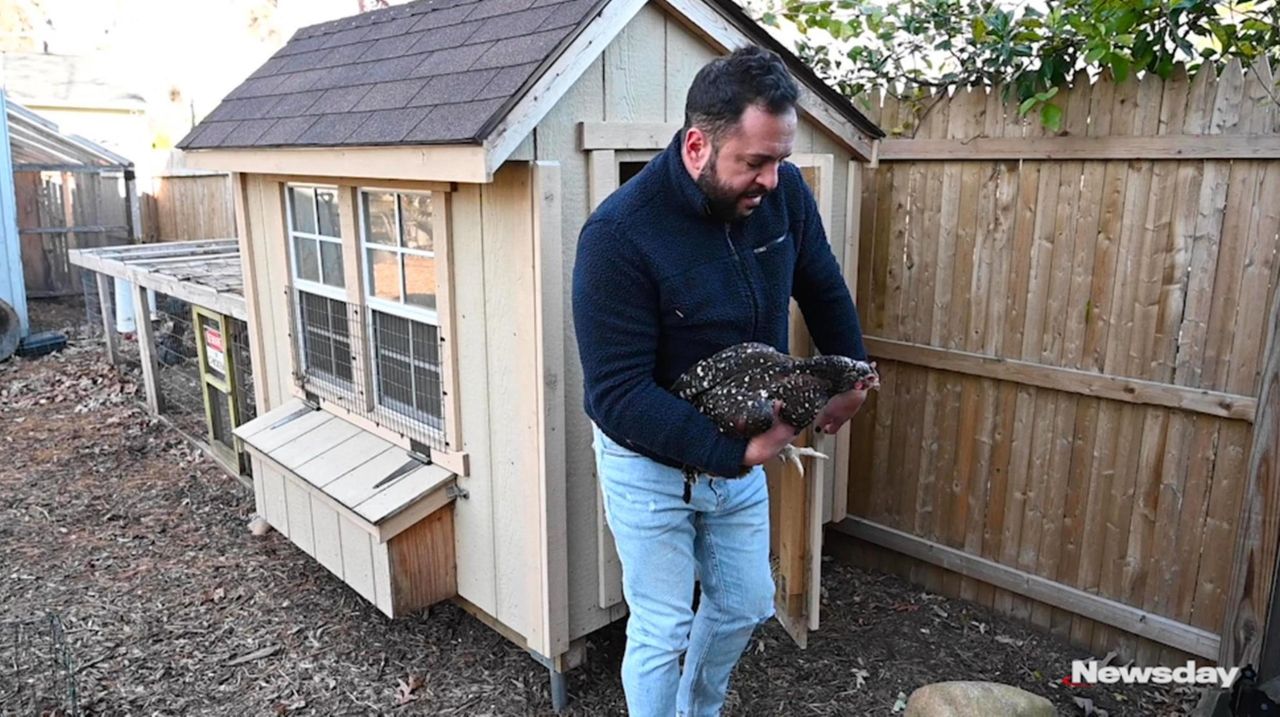 Matthew Ambrosio of North Babylon, who has a chicken coop at his home, speaks out against the town's efforts to amend the rules on keeping fowl, arguing that correlating rat complaints to chickens is a “narrow-minded tunnel vision point of view” and believes people should learn about chickens. Credit: Newsday / Steve Pfost

Babylon Town may amend its ordinance when it comes to keeping fowl in neighborhoods after noticing a correlation of rat complaints near where chicken coops are located.

The town’s Department of Environmental Control said in an assessment for the proposed amendment to animals, chicken coops and keeping of fowl that since 2017 rat complaints have gone up where chicken coops are present.

Recommendations for the amended ordinance include keeping pens, coops or structures that house fowl cleaned once a day; removing feeders or securing them with a cover at dusk; and removing all eggs at dusk.

Town Supervisor Rich Schaffer said a final proposal for the code would likely be released in January for the town board to consider and schedule a public hearing later that month or in February. Schaffer said the DEC’s assessment report, released in October to the public, came after the town received more complaints of rats and he wanted to determine whether there was a possible connection to residents’ chicken coops.

Schaffer said though some chicken owners may not be as clean as others, a change to the original 100-foot setback of a chicken coop would be made "if somebody shows us how that can be done differently, and safely and respond to the other concerns."

Currently, no one can keep more than 30 fowl or fish if such building, yard or enclosure is within 200 feet of any residential property.

According to the DEC’s report, most complaints relating to chicken coop and rodent infestations were not linked to sites within 300 feet of a major roadway that would typically feature restaurants due to town zoning requirements, town spokesman Dan Schaefer said. The complaints began well before the coronavirus pandemic started in the spring.

"Thankfully, we have not yet seen a mass closing of restaurants in the town, thus the claim that the rodents’ food source has been eliminated is not valid," Schaefer said.

Residents, however, dispute the conclusions made linking rat complaints and chickens.

Matthew Ambrosio, 39, of North Babylon, said correlating rat complaints to chickens is a "narrow-minded tunnel vision point of view" and believes people need to get educated on chickens.

"You have to understand what attracts rats," said Ambrosio, who owns chickens and uses the eggs as food in addition to donating them to others. "I challenge naysayers of backyard chickens to educate themselves before assuming an opposing viewpoint."

Karin Capellan, 33, of West Babylon, said she was disappointed upon receiving the assessment because "rats can come from anything." Capellan, who refers to her chickens as her "ladies," spoke during a Nov. 5 town board meeting about the code.

"Realistically speaking, we don’t have that type of space," Capellan said about the 100-foot setback.

Other Long Island municipalities have different restrictions when it comes to keeping fowl.

Islip Town’s code requires a 10-foot setback from side and rear yards. In Hempstead Town, some animals including fowl are not permitted.

John Di Leonardo, president of Long Island Orchestrating for Nature, an animal advocacy group, spoke in favor of the restrictions during a public session of the Nov. 5 meeting.

"It’s a privilege to be able to care for a chicken or a duck," he said. "But allowing just loosening of the law to please a few people [can] cause a big mess for NGOs [nongovernmental organizations] and for the town and neighbors."

When it comes to keeping fowl, Babylon Town’s Department of Environmental Control recommends: