This chicken coop is in the West Babylon backyard of Karin Capellan, who has 15 chickens. Credit: Newsday/Rachel O’Brien

Residents who keep backyard chickens have persuaded Babylon Town officials to amend the restrictive law that prohibits the fowl in most yards.

Town Supervisor Rich Schaffer said during Wednesday's town board meeting that the town attorney is drafting amendment language and council members will discuss it before speaking to chicken proponents who brought the cause to Town Hall last month.

After the discussions, “we will put a final draft together, based on input that we received from all of you, and put it up for a public hearing so that we can have input from all sides,” he told Karin Capellan, who keeps chickens in her West Babylon backyard.

She and others attended the meeting to remind officials they were waiting to hear from them after submitting more than 1,000 petition signatures in June. The petition seeks removal of the 100-foot distance required between the chickens and any house, which limits the birds to large backyards.

Capellan and others have spoken about the town violation notices taped to their front doors. North Babylon resident Maryyam Jeffery, who has six chickens,  said she got a town notice last week.

“We’re not pursuing any enforcement on the code right now, so you don’t have anything to worry about,” Schaffer assured Capellan.

Capellan, who refers to her 15 chickens as her “ladies,” said after the meeting that she was “ecstatic.”

“I thought they swept us under the rug” because people received notices after last month's request, she said. 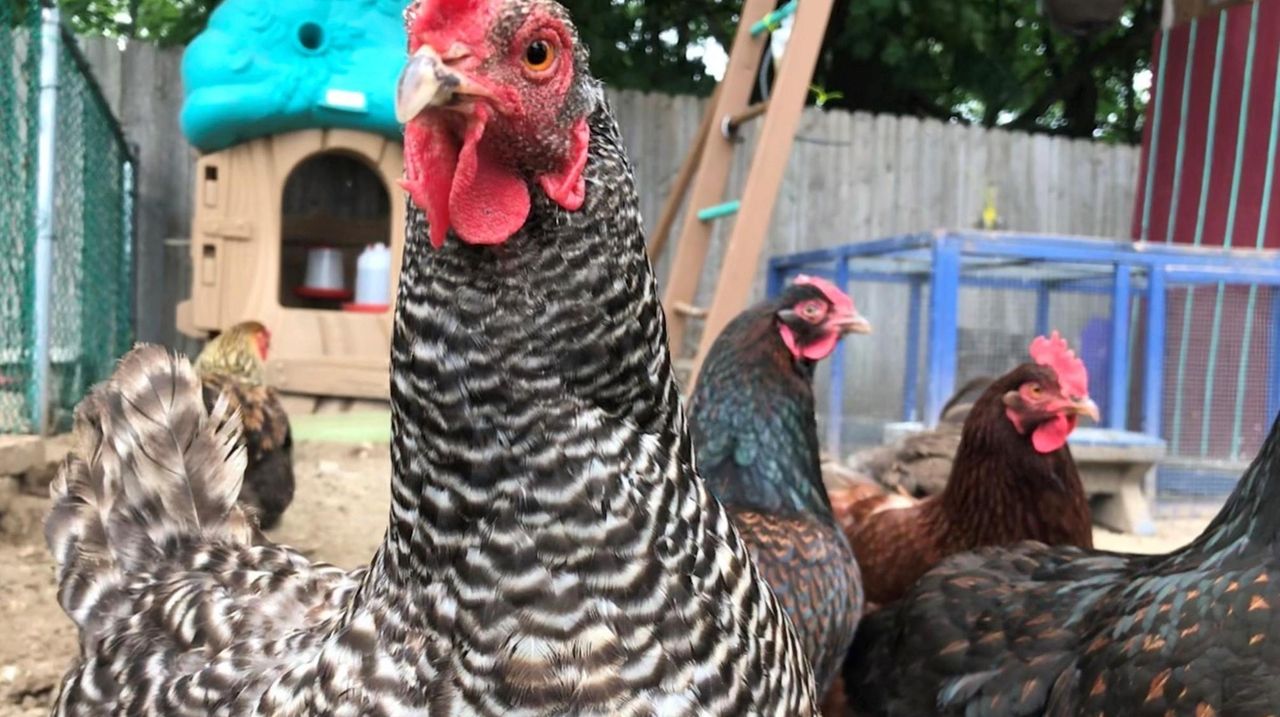 Chicken owners ask town to amend restriction Babylon residents who keep chickens in their yards and received notices they are in violation of the town code are asking officials to change the law to allow chickens to be raised in smaller yards. The town code requires a 100-foot distance between chickens and any house Credit: Newsday / Rachel O'Brien

Chuck Gosline has had chickens in his West Babylon backyard for six years and told the town board the animals have brought neighbors closer.

“What brings people together more than sharing food?” he said, adding that he shares eggs wiith his neighbors, and his neighbors share their greens with the birds.

Gosline, who was unaware of the petition and did not sign it, and others argue that the code is antiquated and based on misinformation about chickens.

Mariana Pineda  kept 16 chickens in her West Babylon backyard but said she gave them away three years ago to a friend after she got a violation.

The chickens were therapeutic for her daughter, who has anxiety and PTSD, she said.

Pineda said her four children cared for the chickens, fed them and collected the eggs. She used the droppings for fertilizer in her organic garden.

“It was a very healthy, nice activity for them,” said Pineda, who signed the petition.

Some proponents argue that the code should include common-sense restrictions, like requiring a coop be kept clean, droppings be removed regularly and food be stored in containers that wild animals can’t access.

For neighbors complaining of noise, Gosline noted the noise that chickens make when laying eggs — between 60 and 70 decibels, the same as a human conversation — is not as loud as dogs barking, which is 80 to 90 decibels.

Residents who received town notices of violation are petitioning Babylon to amend its code to allow chickens to be raised in smaller yards.