A Holbrook firefighter was suspended after making insensitive remarks on Facebook about the two men who died last month while riding a suspected stolen dirt bike in North Bellport.

Jon-Paul Brechter posted a comment on a Facebook post about the accident, in which Keenen King, 19, of Shirley, and Anthony Holmes-Garriques, 20, of North Bellport, were killed, a screenshot of the June 23 post shows. King and Holmes-Garriques were struck after being pursued by a minivan driven by the brother of the bike’s owner, Suffolk County police said.

“Good for them. He shouldn’t be charged. He should be given a medal,” Brechter wrote, as well as referring to King and Holmes-Garriques with profanity. “When this country was great the penalty for stealing someone’s horse was death by hanging #MAGA Bring back public lynchings.”

Brechter, who lives in Holbrook, was suspended June 24, said Chris Heinssen, chief of the department.

Glenn Kurtzrock, a Hauppauge-based attorney representing Brechter, said Brechter has served his community as a volunteer firefighter for 14 years and has “an exemplary and unblemished record.”

“He looks forward to resolving this matter so that he may get back to protecting his neighbors and community,” Kurtzrock added.

Heinssen said the Holbrook fire district will hold a hearing to determine the length of Brechter’s suspension or if he will face any further disciplinary action. He did not know of a date for the hearing.

“It’s a stupid thing he did,” Heinssen said. “But there are 165 members of our department and it’s unfortunate that because of the actions of this one person, the rest of the department’s getting looped into this.”

The department has received several calls from people criticizing Brechter’s remarks, while others have expressed their frustration on the department’s Facebook page.

Several people have shared a screenshot of Brechter’s remarks on Facebook, including Abena Asare, 36, of Stony Brook, whose post about the incident has been shared more than 150 times.

Asare said in an email she doesn’t think Brechter has displayed the minimum “good judgment to be a public servant.”

Heinssen said the mascot was discontinued toward the end of last year, and the photos Asare referenced are an “unfortunate part of the department’s history.” 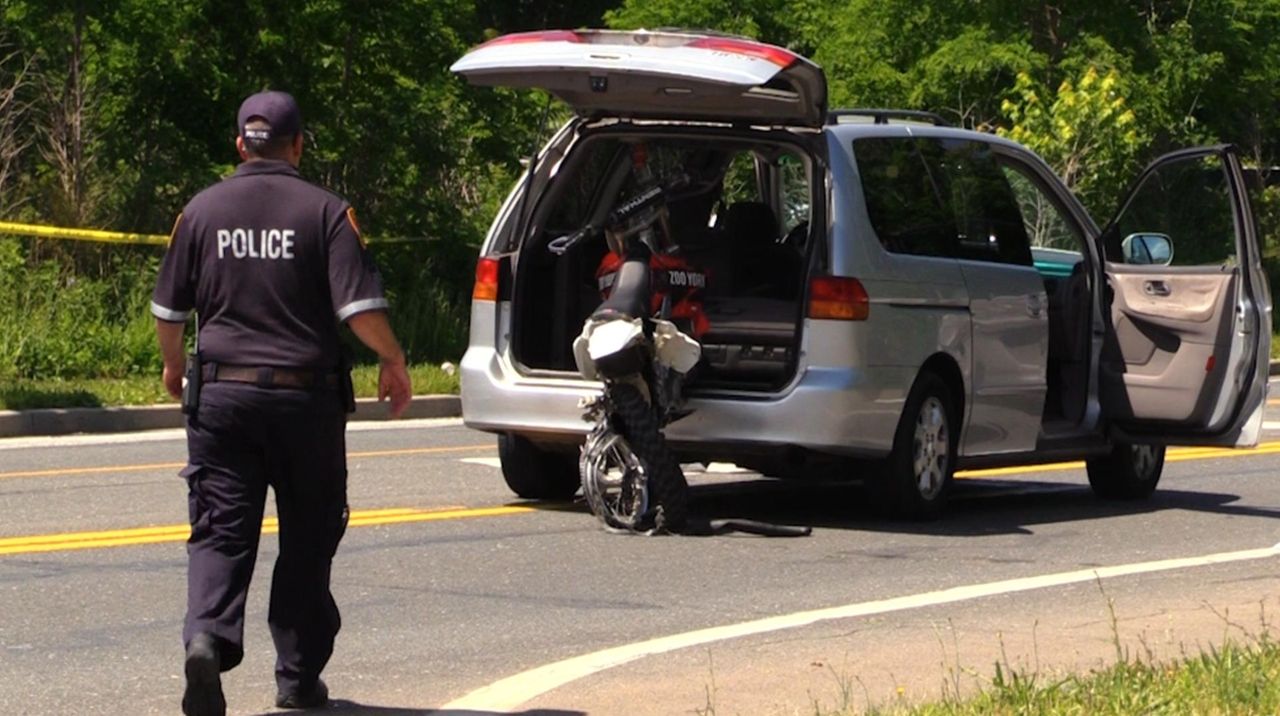 Cops: 1 dead, driver arrested after dirt bike crash A minivan driver was arrested after a crash that killed one and gravely injured another on Thursday, June 22, 2017, in North Bellport, police said. The accident had forced the temporary closure of Montauk Highway between Station Road and Hoffman Avenue earlier in the day as police investigated. Credit: James Carbone / News 12 Long Island

The website has been temporarily taken down and will be reactivated after the photos are removed, Heinssen said.